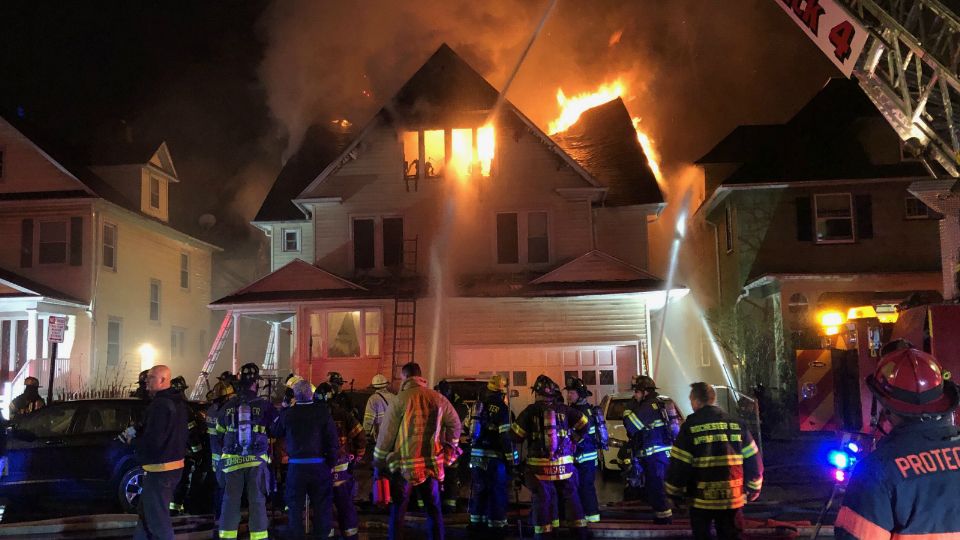 A Monroe Avenue apartment building has been reduced to rubble after a massive fire Thursday night.

Crews demolished the home near Alliance Avenue overnight. Tenants tried to salvage what they could before the building was torn down completely.

The demolition of the Home involved in the three alarm fire on Monroe Avenue started around 2am. #roc @SPECNewsROC pic.twitter.com/79ZHe4vIYO

"I ran to their front door and started pounding on their door and they looked at me like I was crazy,” said neighbor Kyra Ziegler. “I told them to get out of the house right now because their house was burning down. Thank god I got them out when I did cause the fire expanded really fast. It started shooting out of the windows. It was ... it was scary."

Newlyweds Kera and Adam Nugent, who were away on their honeymoon in Florida, lost everything in the blaze.

"I love him with all of my heart and to know that – he was so happy when he told me that he was going to propose to Kiera… From September to March is just unbelievable… My heart is broken for them," Nugent said.

Because of how fast the fire was moving, firefighters said they were only able to search the first two floors before they had to evacuate.

A couple of explosions were heard early on, something crews said does not change their approach.

Two loud bangs could be heard only minutes apart from the home... fire crews are still battling massive blaze. pic.twitter.com/ekcxlkpCzW

One firefighter suffered a burn to the ear and a cat died in the fire.

The Red Cross is helping with temporary housing for those displaced.

Crews are still working to determine the cause.

This three-alarm fire on Monroe Avenue comes on the heels the four-alarm fire just on Wednesday that happened just a few blocks away, and on the same road. Officials deemed that fire "suspicious" at the time.

"Mayday!" call heard in this video from the 4-alarm fire this morning on Monroe Avenue. Despite the heavy flames, officials say everyone made it out OK. #ROC pic.twitter.com/41SYIAFJnK

Meantime, several fundraisers have been set up to help the newlywed couple: