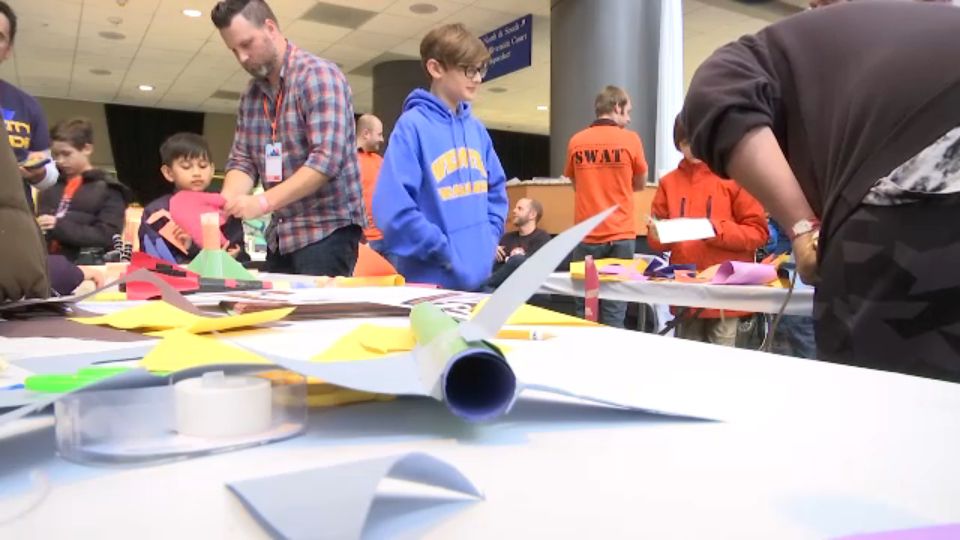 Kids, Families Have a Blast at Maker Faire

Maker Faire returned to Rochester for its 5th annual season this weekend.

With more than 145 exhibits, kids and their families got hands-on experience through a variety of workshops while appreciating the performances and different kinetic sculptures displayed throughout the Joseph A. Floreano Riverside Convention Center downtown.

“Everything from robots to sewing and knitting, to rockets, a half-scale lunar lander, fire-shooting trumpets – everyone and anyone who makes anything is here and showing off and showing their passion,” said Dan Schneiderman, one of the co-chairs of Maker Faire Rochester.

#MakerFaireRochester | In its 5th season the celebration continues to grow. Adam Foster is responsible for these 17-foot tall fire shooting trumpets. Since this won’t be featured in my story tonight, I can at least ignite this flaming attraction here. 🔥🔥🔥 pic.twitter.com/MfQ6GkgWOq

It was light-years of fun for some — but without the spaceships. Instead, mini paper rockets were built and launched.

“Good to get here and be able to do hands-on stuff and then see what new exhibits are here every year,” said Agnello. “Who doesn’t like pushing a button and seeing their creation go flying up into the ceiling?”

Kids quickly got the knack of rocket construction, with Wellsville Central School student Jacob Carmichael calling it a win-win.

“This is hands-on science and they love it and I might have them wanting to pursue rocket science in the future,” said Carmichael, who is only 15 years old and is set on joining either the Marine Corps or Coast Guard when he graduates, but for now, is happy to help kids like Michael’s son find their place on earth.

More than 5,000 people attended the two-day celebration, according to Schneiderman.

Assisting with the countdown and blast off is Jacob Carmichael, a 15-year-old at Wellsville Central School. He says, even though he plans to join either the Marine Corps or Coast Gaurd he loves the idea of showing the younger crowd ways of getting creative. 🚀 pic.twitter.com/egSI3Drlw8