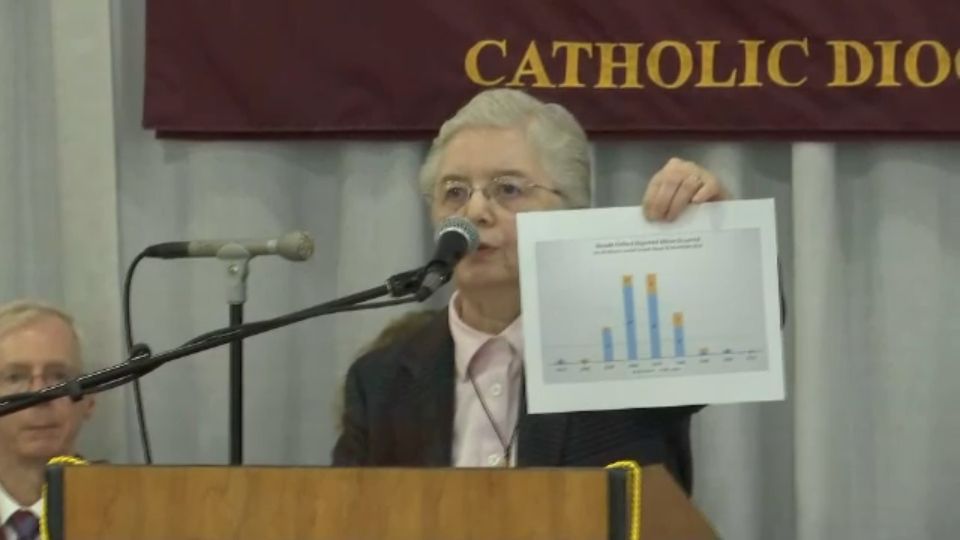 Bishop Richard Malone and other represenatives of the Catholic Diocese of Buffalo spoke for more than an hour and 45 minutes Monday during his first public appearance in months.

Malone said the Buffalo Catholic Diocese was overwhelmed after months ago asking for potential victims of child sexual abuse to come forward, in a scandal which has engulfed the church.

Malone said that since asking potential victims to come forward in March, the Diocese is proceeding carefully and thoroughly, and in a prayer to open Monday's press conference, asked that God "grant that all harmed by abuse may find peace in justice."

Despite calls from parishioners and local officials, Malone again affirmed that he will not step down.

"I know that there might not be a high level of trust right now," Malone said. "The Diocese of Buffalo deserves to regain stability. A resignation does not bring stability. It can have the opposite effect. In fact, it can exacerbate instability."

The Diocese released 36 additional names Monday, 20 diocesan priests and 16 religious order priests, who have at least two substantiated complaints against them (see the new list below).

Buffalo Catholic Diocese attorney Lawlor Quinlan says an additional 98 have not been named. He says the vast majority are deceased priests or order priests with one allegation. Over the last year, he says the diocese has been inundated with new claims.

During every Catholic mass, parishioners recite a creed professing their faith and affirming their belief in the Holy Spirit. Lawlor Quinlan, an attorney for the Catholic Diocese of Buffalo, says the abuse of children by priests is the opposite of the creed and the spirit. pic.twitter.com/R3cinp0rug

Quinlan says the Diocese initially had only one victim assistance coordinator, Jacqueline Joy, responding to the claims, and said they should have been better staffed.

"That shouldn't have been the way that happened, and what we did was respond as quickly as we could. The Bishop brought back Jackie's predecessor who was also a licensed clinical social worker out of retirement, and she helped respond to these claims," Quinlan said.

Diocesan attorney Terry Connors added that they are co-operating with a pair of investigations. He says the U.S. Attorney's Office has asked for information on priests with allegations since 1990 for possible criminal prosecution. The New York State Attorney General's Office is also conducting an investigation of the Catholic Diocese statewide.

Included in the Catholic Diocese of Buffalo’s new list of names: