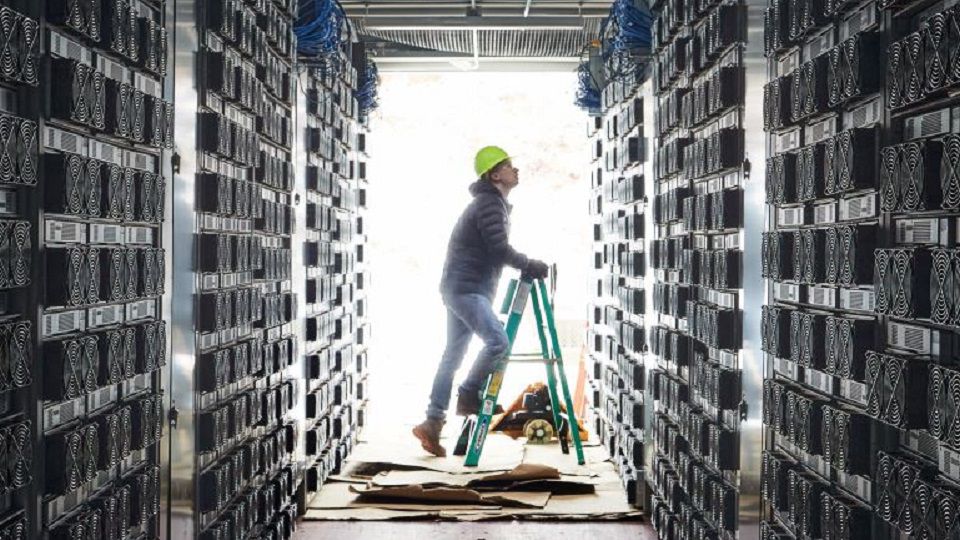 "Well, you just get to pluckin'," said Stapel. "You pull down on these petioles here and we just get to clearing it out a little bit. Just open it right up. One of the good practices of grape growing is keeping your fruit exposed to the air and the sun."

Stapel's been a staple of this grape region ever since he arrived in this country as a child. By age 8, he was picking grapes on these hills. Now, he manages 38 acres for Boundary Breaks Vineyards on the Seneca Lake Wine Trail in Lodi. He knows most of the people who do business on the lake.

Stapel is not happy with one new neighbor, whom he points out from the back patio of the vineyard's tasting room.

"If you look right through those umbrellas, you can see the smokestacks of the Dresden plant right there. Or now, the Bitcoin operation that's going on there," Stapel said. "I liked it a bit more when it was dormant."

But the lights are back on at Greenidge Generation's power facility off Route 14, about 13 miles south of Geneva. The old coal-powered plant shut down in 2011. Atlas Holdings purchased the property and in 2017, brought it back online as a natural gas-powered facility.

"I think they're just trying their best to be good neighbors," said Chamberlain. "And most of the people around here understand that."

The town of Dresden approved the power plant's reincarnation. It feeds the local grid energy. Greenidge Generations provides 40 local jobs and a half-million-dollar infusion into Dresden each year.

And recently, Greenidge began operating a Bitcoin mining operation in the plant, the region's first substantial cryptocurrency operation. Atlas, like many in the industry, turned to the industry's trend of purchasing shuttered energy plants and converting them into these 21st-century gold mines.

Now, you're not alone if you don't know what Bitcoin or cryptocurrency is.

Bitcoin is created when hyper-complex computational puzzles are solved. Computers have been doing this. When they do, their systems record of transactions, known as blocks, set its value.

At Greenidge Generation's Dresden plant, 8,000 computers operate 24/7. It takes 19 megawatts of power to operate the plant. That has environmental activists from the region, and neighbors like Stapel, steamed about the carbon footprint this mining creates.

"I think what people don't understand is how energy-intensive this industry is. This proof of work, cryptocurrency, commonly known as Bitcoin, uses up as much energy as small countries like Sweden, Argentina," claims Yvonne Taylor, head of Seneca Lake Guardian, a group that has fought previous environmental battles in the Finger Lakes, including efforts by Atlas to resume operations at the Dresden plant.

Taylor and others also don't like how Greenidge keeps its Bitcoin operation cool.

To maintain operating temperatures in its mine, Greenidge must cool its computer racks. It is licensed by the state of New York to draw 134 million gallons of water from Seneca Lake to do it. Once the water is used in the plant’s cooling system, it is returned to an outlet of the lake warmer than when it was drawn.

New York State licensed Greenidge to return the water to Seneca at no warmer than 108 degrees Fahrenheit, a temperature considered by opponents of the plant to be dangerous to the lake and the environment around it.

People like Taylor and Stapel claim that warming creates conditions that can harm the fish population of Seneca Lake and create conditions for harmful invasive species, including blue-green algae.

"This is next to the Keuka Outlet stream, which is a spawning stream for rainbow trout," Stapel said. "And this is coming out at 108 degrees. Now I don't think you really need to be a scientist to know that those numbers don't add up. It would be nice if we had some scientists to say 'those numbers don't work out.' "

Greenidge says it has not warmed the lake with its Bitcoin operation's cooling system discharge, because of the cold springs that consistently feed the Finger Lakes' deepest body of water and the sheer scope of its daily return to the lake. Seneca is more than four trillion gallons of water. One scientist compared adding 134 million gallons of warmed water to it to trying to warm a bathtub of cold water with a thimble of warm water.

The company first offered to let Spectrum News 1 tour its Dresden plant. It decided not to as its owner heads toward a possible merger in September.

A spokesman said its Dresden plant remains in full compliance with its state permit and that there is no evidence of environmental impact, including harmful algal blooms or affect on fish.

Gwen Chamberlain, who sits on the advisory board for the plant, believes in what's happening there.

"When we're in the middle of fighting climate change, resurrecting old shut-down power plants to make fake money in this model is literally a very big concern," said Taylor.

That claim holds no juice to growers like Stapel.

"The thing about it: Nature's always trying to get your grapes," he said.