GREECE, N.Y. — On Friday and Saturday, volunteers from the town of Greece helped in a community build for an inclusive playground at Basil Marella Park.

The idea for the playground started with 8-year-old Santii Patel’s dream to play side-by-side with kids who may be in a wheelchair. She saw her dream come true as she helped build the playground alongside the community. She said she was so excited when she first saw the playground.

After a weekend of hard work by volunteers, the new inclusive playground at Basil Marella Park in Greece is almost complete! It’s expected to be ready for playtime in July @SPECNews1ROC pic.twitter.com/AYTouPDb0Y

"I did a smile and I bounced up and down,” said Patel. "Now kids in wheelchairs can play after all this time."

Patel has been working hard to make this happen for a while. She said it all started when she was out playing one day and saw a girl in a wheelchair.

"I asked my mom why she couldn't play and my mom says because she was in a wheelchair,” said Patel.

Soon after, she held several fundraisers, including a hot chocolate stand to help raise money. 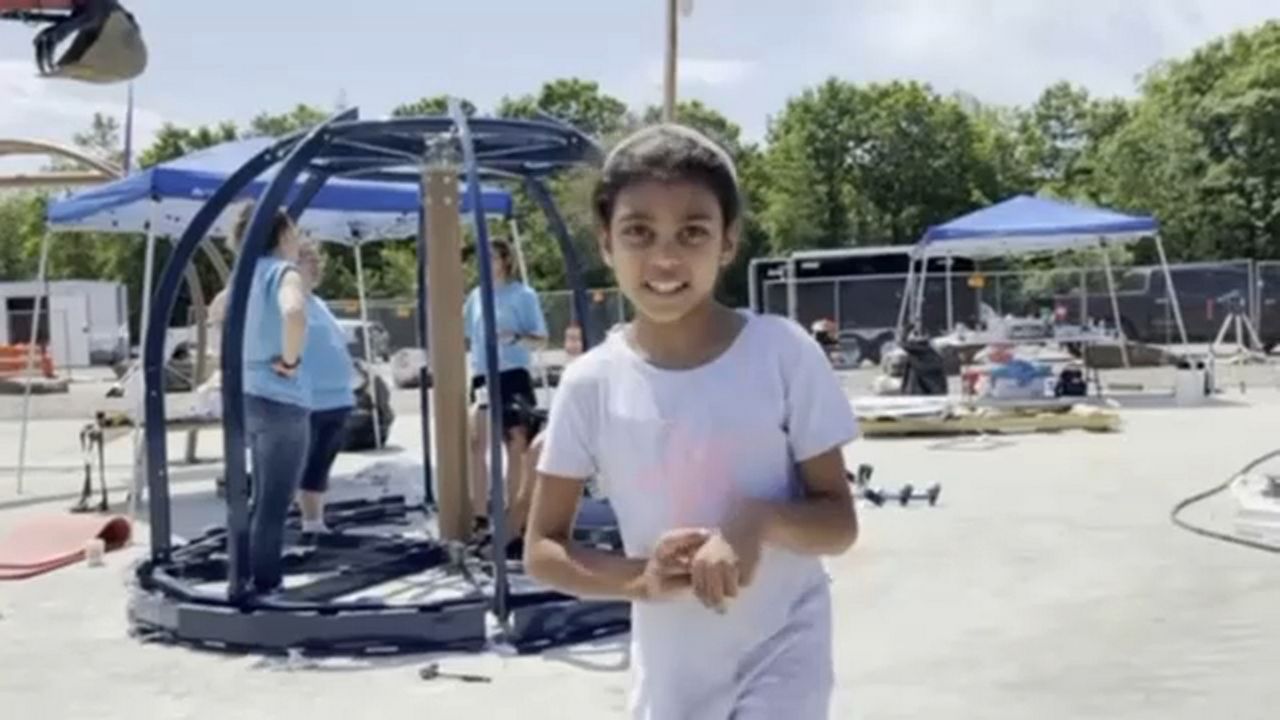 All of her hard work paid off. Endless Highway, a non-profit that works to make sure kids and young adults with disabilities can participate in inclusive sports and play, promised Santii they would help with funding. The town of Greece then took over the rest. More than two dozen volunteers from Greece came out to help put the pieces together.

"This is an honor to be out here,” said one volunteer. “It's a community event. The community's all coming together. We want to thank the little girl that started this whole thing. She should be very proud."

The playground will include what's called a "we-go-round" and a "we-go-swing," which allows people who use a wheelchair to feel the wind in their hair too. Jill Moore, an inclusive play specialist with Landscape Structures, helped design these rides.

"I'm kind of our unofficial crash test dummy,” said Moore. “What this ends up meaning is I just get to add a lot of user voice to what we create. Because that's pretty important to designing with people with disabilities and not for. My involvement was helping with the design, saying what we really needed, what we needed to make sure we kept. Like that feeling of being able to push yourself on the swing or the spinner. That sense of control and independence."

Over two dozen volunteers worked on piecing together the playground Friday and Saturday pic.twitter.com/BOlZObPo1V

There's also a sensory center, which appeals to those who have autism, shaded areas and a mini track will be added.

Moore said this playground is meant for all abilities and ages. Adults who use a wheelchair can play with the kids in their lives too.

Peter O’Brien, director of Parks and Recreation for the Town of Greece, said Patel helped pushed the town in a direction it was already heading.

“She was an awesome inspiration," said O’Brien. "I think she mirrored what the Town of Greece has been doing for a few years now. For just a little bit more money and a little bit of effort, I think you’re going to see that inclusion is a way of life and it’s going to become a standard.”

The inclusive playground is expected to be ready for playtime for all in July.