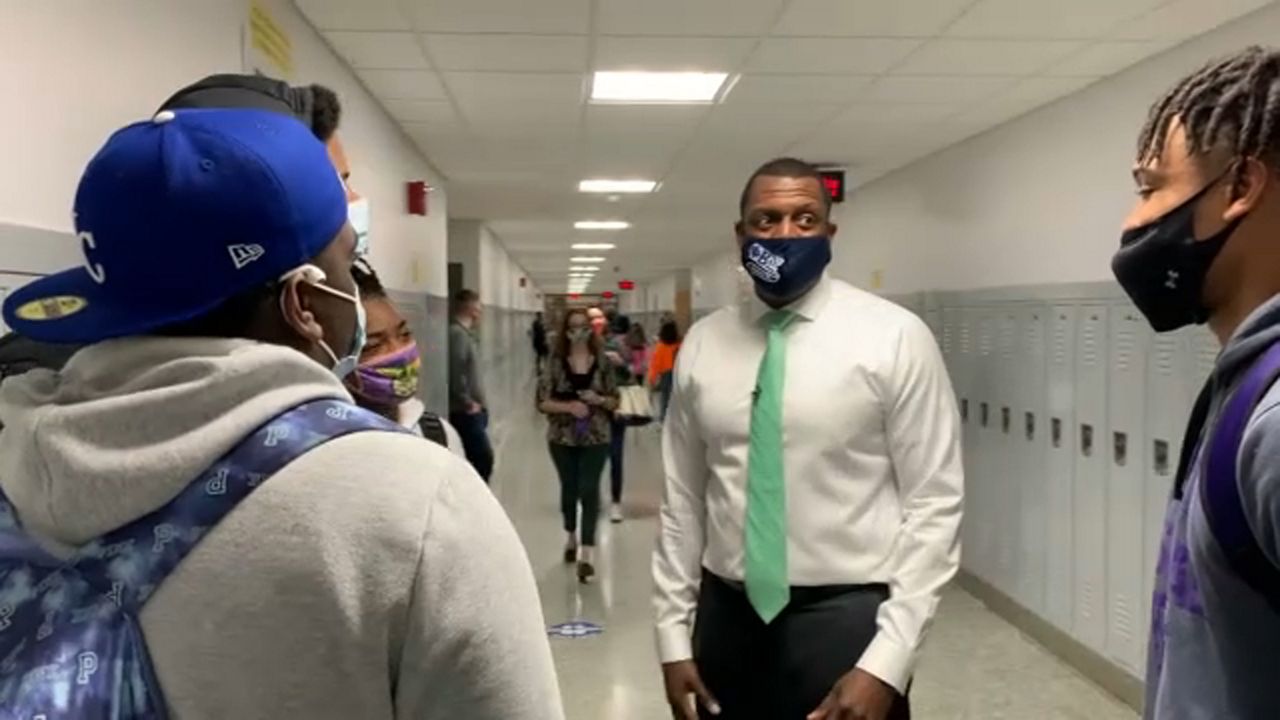 ROCHESTER, N.Y. — As he takes his latest Zoom meeting on curriculum building to bring the Black experience to classrooms beyond those in urban districts, Shaun Nelms sees waiting, at the end of the island in his kitchen, his DJ mixer.

It’s gear Nelms turns to balance the grind of being an educational crusader for equity in education.

“Sometimes at the end of the day, I’ll just go. Do it for myself, unless my kids are around, which is great, but I need that expression,” Nelms said. “Because this, what I’m doing, it’s an immersive experience.”

The experience Nelms works to change each day as he leads a Rochester high school, and speaks to educators, teachers, parents, and leaders across communities, is to be free of the lifelong experience young black Americans have of not feeling like they belong in the places they go.

It’s an experience learned growing up in Buffalo, that he started to shed as an undergrad at SUNY Fredonia, that he’s committed to changing through his role at the University of Rochester and, as the EPO superintendent of Rochester's East High School.

Nelms wants it to change for his three children and every child he can reach; as an educator and advocate.

Intense? You bet. Both Nelms and the challenge. To take the edge off, especially during the isolating months of the pandemic, Nelms turns to music and a newer pursuit: social media chef.

"Alright, alright, alright. Welcome back, welcome back to Lab Chronicles. Today, we're going to finish off the lamb we started yesterday," Nelms said as he recorded on his phone the second episode of his recipe for braised lamb.

"Cooking's given me an opportunity find something else technical to do, that gets my mind working," he said.

The Facebook episodes he produces work for him too, as he tells his audience: "You can put it in, go back to work; which is what I'm going to do, put back on the clown suit."

"For me, it's a way to connect, head over to a friend's house, give 'em a loaf. Friend of mine started doing that and said it's kind of cook to kind of loop people in.' So we loop in, give bread, give food, give whatever. Just a way to give back," Nelms said.

Nelms shares new recipes the way he nurtures new curriculum at East, and beyond.

As he visits the high school’s Vision Care program, he spends time with students working in one of East’s showcase college and career pipeline classes.

It’s part of the vision at East’s EPO or educational partnership organization. The University of Rochester formed it with East High and the city school district six years ago. That's when Nelms arrived as superintendent, not principal, a difference that enabled Nelms to hire within East.

The EPO launched at East’s six years ago, as its graduation rate headed for 19%. Through a complex array adjustments to East, the graduation rate’s closing in on 80%.

And it starts, according to Nelms with CTE-like programs like Vision Care.

"They go out to schools, and they do eye exams for students throughout the city. Last year, they made a thousand pair of glasses. They get frames donated and they actually make the lenses for the kids," Nelms said.

Listening to the students and families and what they believed they needed from their education is part of those adjustments. Another is bringing the experience closer to home. When Nelms arrived, just 5% of students were from the neighborhood around East. Now 55% are from the city's southeast.

"How do you create a model that's not just academic, but it's culture-serving? It's community serving, student serving, staff serving?” Nelms said in defining how he and his team developed the East model.

Students pass Nelms in the hall and easily greet him. Three members of East’s sectional-favorite boys basketball team checked in with Nelms between classes.

In the optics classroom, one junior chatted up the lens assignment. McKenna French shows Nelms how measurements are developed.

"He keeps everything comfortable,” said French. “He's a positive guy."

To see the positive in the methods Nelms leads at East, step into the courtyard, where giant portraits from its “Eyes Project” inspire students by seeing the eyes of local people of note, such as Constance, Mitchell, Garth Fagan, and Mayor Lovely Warren, people, as well as national and international icons, from Oprah Winfrey to Nelson Mandela.

"We identified leaders; local, national, international, that will remind them of their own greatness to address some of the self-hatred that often happens in schools," said Nelms.

Nelms' work moves beyond East too. He's broadening black curriculum across Monroe County schools through his work at the University of Rochester's Konar Center for Urban Education Success. Black history will be blended into in the history curricula of suburban schools.

All of the change Nelms and reforms like him seek creates a life of non-stop energy; and the need to sustain it.

His journey has made Nelms one of the lead voices for change in education in our cities.

At a Leadership Rochester event at the Eisenhart Auditorium, Nelms spoke about what can be short-lived efforts to create change in urban schools.

"The coordinators, they take on these roles. They have to be given the space to truly understand the context of the organization if they're really going to move towards and fulfill an equity agenda," said Nelms, who followed Rochester City School District Superintendent Dr. Lesli Myers-Small at the Leadership Rochester event.

"And I always felt restricted by some of the red tape and some of the bureaucracy,” he said. “And when I decided to take this job, it was the university that said, `if we remove all those barriers, can you do the work?' And I said `if you can do that, we can make this work for families and our kids.'"

"My honest opinion, the U of R came in and there were bumps in the road. But through listening and leadership, then you can get the idea of working through those things, together, rather than being told what to do."

Nine out of the 10 students Shaun Nelms sees each day at East come from economic disadvantage. It's why he knows it about more than just graduation rates. It's social justice and housing equity. Nelms sits on an endless number of boards. He works 80 to 100 hours a week and admits it comes at a personal cost.

"I remember I was brushing my teeth, looking into the mirror and it's like, ‘Man, which face am I wearing today?' And sometimes it's: dad, father, activist, it's husband, it's sibling, it's, you know, consultant. And it's someone who's trying to prevent something from happening. And some days you wake up and ask: which face is my true face? Who am I authentically when all eyes are watching? And that's the person I'm most comfortable with being, but I wasn't allowing myself to be publicly. Like I always felt like I had to be prepared for the worst situation, then be the voice of calm for everyone else, that I wasn't finding balance for myself. I think many educators face that.”

And Nelms believes it's one reason school equity can become a fad, and not an element in an urban student's learning life.

"We want to make sure our students see themselves every single day in this school and I think that's transformative,” Nelms said. “When you're teaching a population of students that is predominantly Black and brown and international and there's nothing in the school that represents them, they're less intrigued."

"Putting myself in different seats in the community, allowing myself to influence education, policy at the state level. Helping the University of Rochester think about its teaching programs, I think provides more sustainable change, over time. It also allows me to be protective of some of the barriers that prevent a leader of a district from being successful."

“So I learned a long time ago that influence is much greater than power,” he said. “I believe that. I believe that you know having a position, or being in a position of authority is not where true difference is made. I think influence creates long-standing and long-term change."