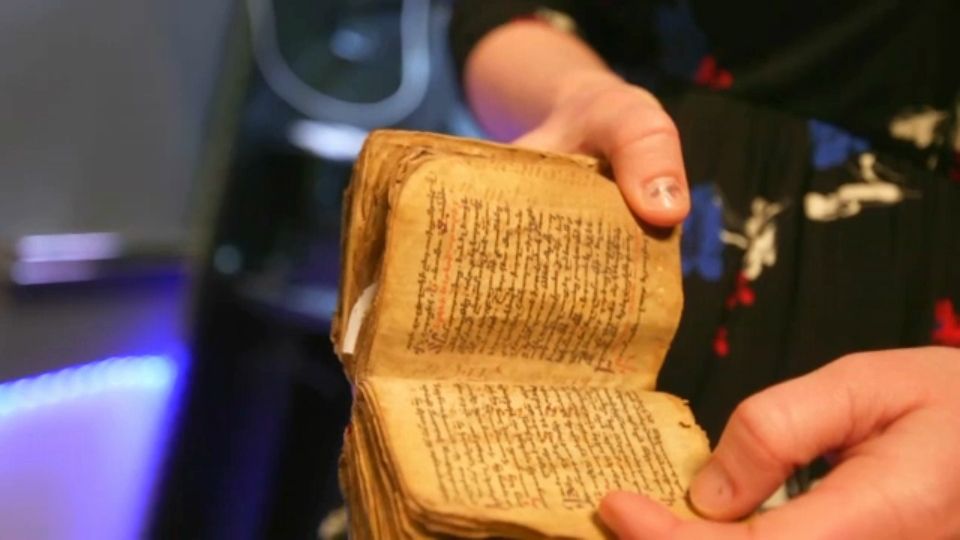 U of R Researchers Study Lost Text in Centuries-old Manuscript

Scholars at the University of Rochester received a FedEx package recently, containing very rare — and very fragile — content: a 500-year-old book sent by the Smithsonian Institution. Work to uncover what's hidden inside may be even rarer than the manuscript itself.

In a second floor lab at the U of R’s Rush Rhees Library, lost treasures are being recovered.

“The moment of discovery is always incredibly exciting,” said Gregory Heyworth, associate professor of English. “It's kind of like Christmas, but for the ages."

Heyworth is also director of The Lazarus Project, a nonprofit dedicated to recovering lost manuscripts, maps, and other cultural heritage objects.

“Many of these objects are perishing even now,” he said. “There are vanishingly few people in the world who do what we do."

A fact which makes the team's most recent effort all the more important. For three weeks, the team took images of the 15th century manuscript, a prayer book written in Armenian.

“We know what the overtext is because scholars can read it,” said Alex Zawacki, an English PhD candidate at the university. “We have no idea what the undertext is."

Zawacki says in centuries past, it wasn't uncommon for text written on parchment to be erased, and re-inscribed with new text. Using different waves of light, researchers were able to capture images of the forgotten text, not visible to the naked eye. Those images are being processed, so they can be shared with scholars who will try and help decipher the subtext.

“The opportunity to find something nobody has read in thousands of years is really exciting,” he said.

Researchers think the original text could date back to the 5th century. A truly hidden treasure, uncovered by a team that's ensuring the past, has a future.

“There's an opportunity in every archive, in every collection which are overlooked,” said Heyworth. “Which can be really significant."