Four Arrested For Plotted Attack on Muslim Community in Catskills

Four Rochester-area men have been arrested in connection to a plotted attack on a Muslim enclave in the Catskills. Officials say police recovered IEDs and the target was the community of Islamberg, New York, in Delaware County.

Andrew Crysel, 18, of East Rochester, Brian Calaneri, 20, of Rochester, and Vincent Vetromile, 19, of Greece, and an unidentified 16-year-old are all charged with three counts of first degree criminal possession of a weapon and one count of fourth degree conspiracy.

According to police, Crysel was released from jail Tuesday night. The three others remain behind bars. 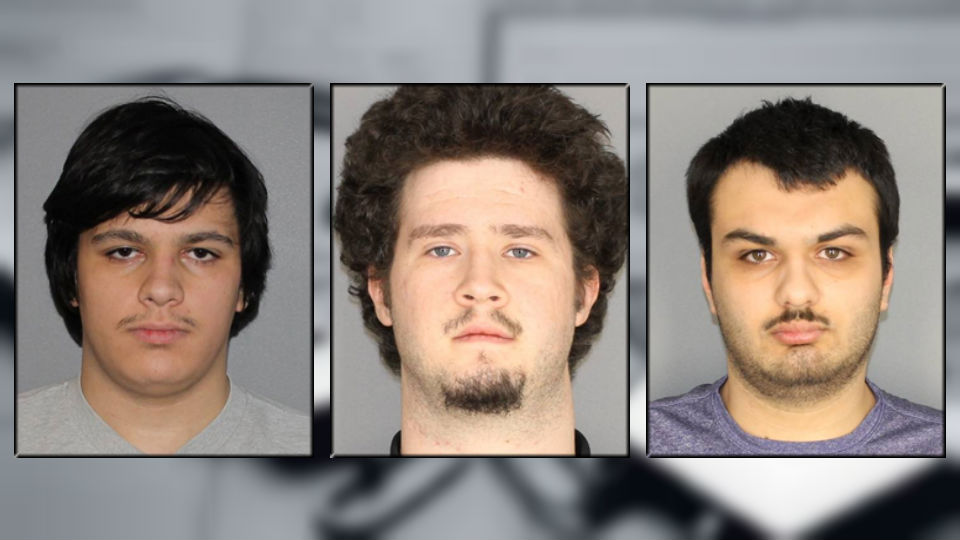 Andrew Crysel (left), Brian Colaneri (middle), and Vincent Vetromile (right) are charged with conspiracy and criminal possession of a weapon in connection to a plotted attack on Islamberg, New York. (Spectrum News)

The investigation began Friday at Greece Odyssey High School when a student notified a security officer that they overheard others talking about a possible school shooter, which launched an investigation.

"We say to kids if you see something, say something. You got to report something. The lesson is that it works," said Greece Police Chief Patrick Phelan.

According to Phelan, officers executed numerous search warrants and recovered 23 firearms and three IEDs from the three suspect’s homes. All of the IEDs were recovered from the 16-year-old’s home, according to police. Phelan says all the guns were legal firearms and not assault weapons.

The homemade bombs have since been turned over to the FBI for examination. Both state and federal officials are working hand-in-hand to get indictments and figure out how to move forward with prosecution. Phelan said additional charges and arrests could be forthcoming.

Investigators are still working to gather additional information from electronic devices also seized from the suspect’s homes. Police say it’s still unclear if there was an exact date set for the attack, but say the suspects had been planning the attack for months on a voice and text app for gamers called Discord.

#GreeceSchool Supt #KathleenGraupman on arrest of four for a plot against a Muslim community that began with investigation at #GreeceOdyssey. One student alerted adult. pic.twitter.com/Ynb3sMVpOy

The suspects are scheduled to appear in court February 5 after being arrested by police in Greece over the weekend. They all previously attended Monroe Community College, according to school officials. The 16-year-old was a student at Greece Odyssey.

According to court paperwork, the IEDs  were ranging in size — some as small as mason jars. Others were described as medium to large-sized cylinders. All were wrapped in duct tape.

Police say the men had "intent to use the weapons against the persons and property" in Islamberg. The small hamlet of Delaware County is about 45 miles east of Binghamton.

Islamberg is a largely Muslim community, developed by a Pakistani immigrant more than 30 years ago. It is a community connected to the Muslims of America, a group that has developed 21 Muslim communities throughout the country.

Although the investigation began at Greece Odyssey on Friday, the alleged threats did not involve the school in any way, according to Phelan.

The president of the Islamic Center of Rochester, Tabassam Javed, says that alleged plan would never even been formed if the four suspects had more interaction with the Muslim community.

Family members of the arrested suspects spoke to Spectrum News about mental health, and how the men knew each other.

The Muslims of America will conduct a press conference Wednesday at 4 p.m. at the Holiday Inn Binghamton in response to these arrests.