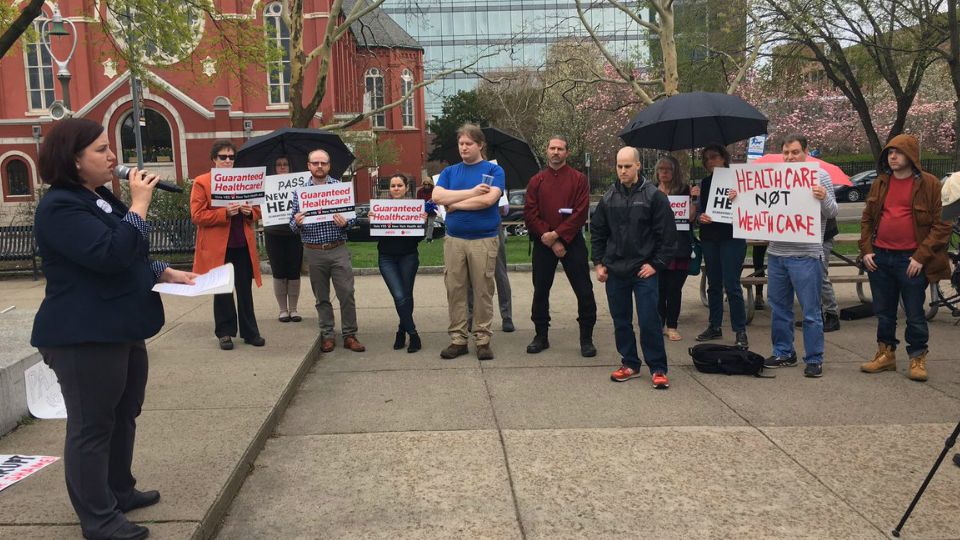 A rally took place in downtown Rochester Wednesday to drive support for legislation that would create universal health care statewide.

“My daughter spent the first several years of her life in and out of hospitals, racking up before she was 7 months old half a million dollars in medical debt,” Reisch said.

Luckily they had employer health insurance, though Reisch says that was a privilege she knows not everyone in the state has.

And that’s what brought her to Washington Square Park Wednesday, to rally in support of the New York Health Act — legislation that would create universal health care in the state.

“Every parent, every person in New York State should be able to focus on their health, and not worry about the cost,” Reisch said.

Dr. Rae Ellen Kavey is a retired physician who helped organize the rally.

She says besides coverage for all — that would include dental, vision and long-term care — she says costs would be cheaper under a single-payer system.

“If everyone was under the same plan, we could negotiate with the drug companies, and guarantee lower prices,” Dr. Kavey said.

But Leanne Politi with the Realities of Single Payer Coalition says the tax burden would be too much, according to a RAND Corporation study last year.

“Taxes will be going up by at least $250 billion, which is more than double the entire state budget,” Politi said.

But Dr. Kavey argues the costs would just shift from paying premiums to taxes, which are also already being paid to help those that can’t afford it.

Still, Politi also argues that proposed cuts to hospitals and providers to help pay for the legislation could affect quality of health care.

“Hospitals can’t stand to take huge cuts, especially hospitals in rural areas that are already struggling. So what will the impact be on those hospitals?" Politi said. "And doctors may decide they don’t want to practice in New York anymore, and just get up and leave.”

The bill will be up for a public forum in the Assembly and Senate in a couple of weeks on May 15.

“We are all human beings. It’s a fundamental human right. Nobody should die in our state, nobody should be uninsured because of cost.” Reisch said.

And that rally ended with a march and protest outside the Excellus BlueCross BlueShield building down the block from the park, with the group criticizing the company for a 13 percent raise to their CEO's salary and $182 million profit in 2017.

The company responded with a statement arguing their impact on the upstate New York economy, reading in part:

“In addition to the $5 billion in medical benefits that we paid in 2018, we added more than $650 million and 1,500 jobs to the upstate economy … generated by our health plan and its employees,” Jim Redmond, Excellus BlueCross BlueShield regional vice president of communications, said.