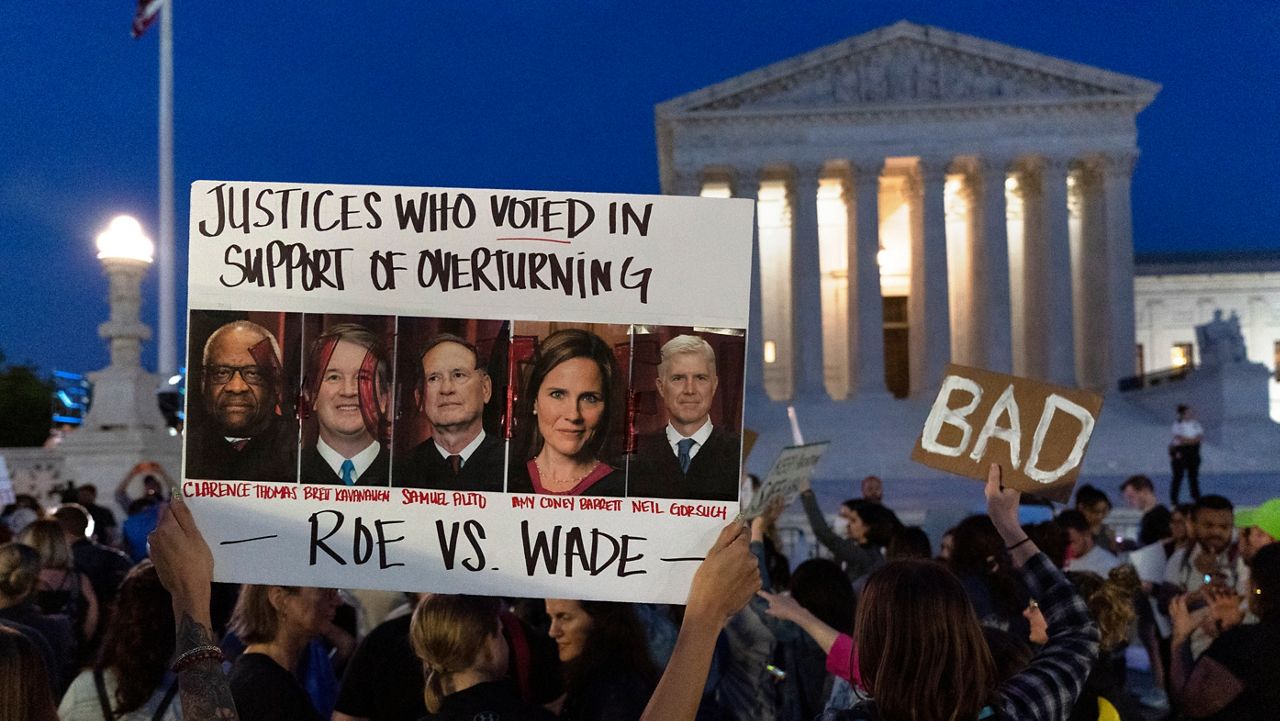 Protests continued outside of the United States Supreme Court building and across the country on Tuesday after a leaked draft opinion obtained and published by POLITICO on Monday showed the high court intends to overturn Roe v. Wade, the landmark 1973 case that guaranteed the right to an abortion nationwide.

The high court on Tuesday confirmed that the draft is authentic, but said it does not represent a decision by the court nor the final position of any of its members.

The question before the court is simple: Is Mississippi’s law banning nearly all abortions after 15 weeks’ gestational age unconstitutional?

“Abortion presents a profound moral question. The Constitution does not prohibit the citizens of each state from regulating or prohibiting abortion. Roe and Casey arrogated that authority,” Justice Samuel Alito wrote in the draft opinion, referring also to Planned Parenthood v. Casey, a 1992 decision also regarding abortion. “We now overrule those decisions and return that authority to the people and their elected representatives.”

The opinion published is labeled “1st Draft” on its first page, and is noted as a version circulated on Feb. 10. Draft opinions are not final decisions, and it is not yet confirmed which justices have voted in favor of essentially overturning Roe. However, Politico’s reporting states that four other justices, from the court’s most conservative wing, are aligned with Alito’s opinion: Clarence Thomas, Neil Gorsuch, Brett Kavanaugh and Amy Coney Barrett.

In a statement, Roberts called the leak "a singular and egregious breach of that trust that is an affront to the Court and the community of public servants who work here."

Roberts directed the high court's marshal to investigate the source of the leak and pledged that "the work of the Court will not be affected in any way."

"To the extend this betrayal of the confidences of the Court was intended to undermine the integrity of our operations, it will not succeed," Roberts said.

Republicans largely echoed that sentiment on Tuesday, with very few addressing the draft opinion itself, but rather expressing outrage about the leak.

One such lawmaker who did address the opinion, Texas Sen. Ted Cruz, said that Roe was "wrong the day it was decided."

"It was seven unelected lawyers who declared to the American people that that the voters no longer have the right to make decisions about abortion," he added.

President Joe Biden responded to the draft ruling by calling it a potentially "radical decision."

“If this decision holds, it’s really quite a radical decision,” he said to reporters at Joint Base Andrews as he prepared to leave for Alabama. “It's a fundamental shift in American jurisprudence.”

The president said the issue at hand is how this violates the right to privacy guaranteed in the constitution.

“This goes far beyond the concern of whether or not there’s the right to choose. It goes to other basic rights: the right to marry, the right to determine a whole range of things,” he said.

“So the idea that we're going to make a judgment that is going to say that no one can make the judgment to choose to abort a child based on a decision by the Supreme Court — I think goes way overboard,” he later added.

In a statement Tuesday morning, President Biden said that while "we do not know whether this draft is genuine, or whether it reflects the final decision of the Court," he pledged that "we will be ready when any ruling is issued."

Biden outlined three points about the abortion rights cases being considered before the high court, including a call for voters to elect more pro-choice candidates in November's midterm elections.

My statement on the reported Supreme Court decision draft. pic.twitter.com/Kt3bP0kzqU

"First, my administration argued strongly before the Court in defense of Roe v. Wade. We said that Roe is based on 'a long line of precedent recognizing ‘the Fourteenth Amendment’s concept of personal liberty’… against government interference with intensely personal decisions,'" Biden wrote. "I believe that a woman’s right to choose is fundamental, Roe has been the law of the land for almost fifty years, and basic fairness and the stability of our law demand that it not be overturned."

"Second, shortly after the enactment of Texas law SB 8 [the state's fetal heartbeat bill, which bans abortions at around six weeks] and other laws restricting women’s reproductive rights, I directed my Gender Policy Council and White House Counsel’s Office to prepare options for an Administration response to the continued attack on abortion and reproductive rights, under a variety of possible outcomes in the cases pending before the Supreme Court," Biden continued.

"Third, if the Court does overturn Roe, it will fall on our nation’s elected officials at all levels of government to protect a woman’s right to choose," Biden added. "And it will fall on voters to elect pro-choice officials this November. At the federal level, we will need more pro-choice Senators and a pro-choice majority in the House to adopt legislation that codifies Roe, which I will work to pass and sign into law."

This is believed to be the first time in modern history that a draft opinion has been published before a case has been decided, though, coincidentally, the 1973 decision in Roe v. Wade was published in "Time" before the high court issued it.

Five other states — Alabama, Arizona, Michigan, West Virginia and Wisconsin — currently have abortion bans on the books, though they have remained unenforcable as long as the precedent set by Roe has been the law of the land.

Protesters on both sides of the issue gathered outside of the Supreme Court after the report came out Monday night, signaling a larger fight over abortion rights is still to come in an already deeply divided country.

According to a poll from Pew Research Center, nearly 60% of Americans believe abortion should be legal in either all or most cases.

A final ruling in the case is set to be issued in June or July.

This is a developing story. Check back throughout the day for further updates.