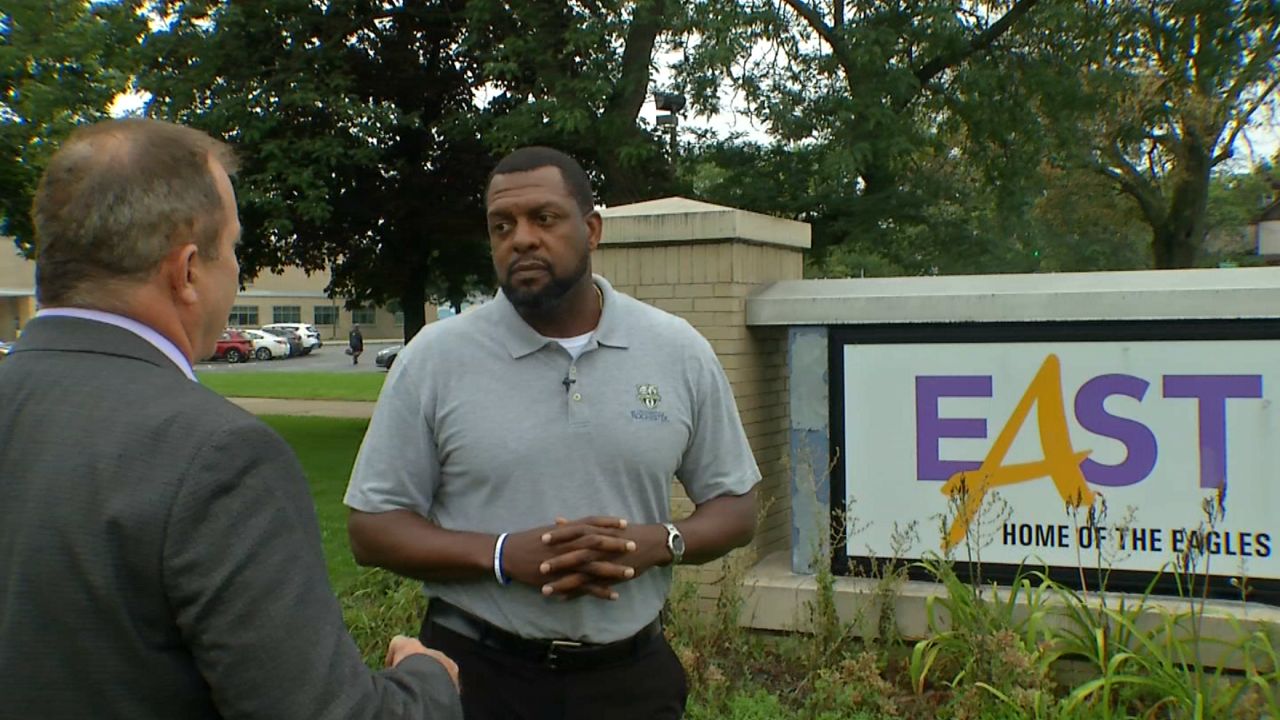 ROCHESTER, N.Y. — Back to school in Rochester on Wednesday means students returning to classrooms after a summer marred by a gun violence state of emergency.

Teens have been among the wounded and murdered in the attacks that triggered it.

Counseling and a safe place can be found on campuses like East High, where Superintendent Shaun Nelms has worked with families and faculty through the summer to be ready for the start of a school year like no other.

"I will tell you this is probably our best planning year because we know the kids more and the families better and so we're able to connect resources that are within the community, but also within the school to kids from the most neediest of ZIP codes," said Nelms. "And so we've been very strategic about identifying the students, making sure they are with staff members who are knowledgeable about how to support students in trauma, but also not losing focus that these kids need to be challenged academically so they can make it out of those conditions permanently in life. And so there is a balance between supporting what's happening currently, but also creating a plan forward for those students to break the curse of generational poverty."

The trauma caused by the violence in Rochester over the summer can potentially have a significant, lasting impact on students as they return to class. It's something they have had to deal with before at East, but this summer has exceeded it.

"It's new learning for all of us," Nelms said. "So I spent quite a bit of time this summer leaning into community organizations, getting intel from them. 'What are you hearing? What are you seeing?' Talking to the department of psychiatry, the U of R. 'How are we dealing with students outside of the school day in ways that support their social-emotional health? And also how are we going to support a plan for them academically that challenges them in a way that keeps them engaged?' So yea, you're right, I don't think people really understand the depth of hurt that either direct trauma or vicarious trauma causes in the lives of our students. There are students who may not be directly impacted, but they see the shooting, they hear the shooting. It could impact a neighbor or relative. And those kids bring some of that hurt, some of that pain, some of that hesitancy, a lack of trust for our community, into the school setting. And either they lean into school resources or sometimes they act out, and so we have to be prepared for both reactions from students."

Those who are not directly counseling the students are regular subject teachers. The violence can also have an impact on them and then ripple through the rest of the student body.

"We often forget about the adults in the system," said Nelms. "Our adults are not necessarily trained in how to support incidents like this. And so we have to also watch them to see if they're struggling, if they're reacting in ways that maybe aren't as patient as they would have been and we have a thing we say 'tap out.' If you're at a point where you can't control something and can't control your emotions, tap out. Tap a colleague in, let an administrator know and let a counselor come in and intervene. And so we have to be aware of how we support the students and also the adults in the system and that became abundantly clear last year when we saw some adults quite frankly struggling with dealing with the trauma that kids are bringing with them. And so we planned this summer for putting a lot of social-emotional time in for adults in the building, opening up our gym to adults in the morning and afternoon. We had yoga classes last year, physical fitness training classes last year, to help the adults. The belief is if the adults are taking care of themselves, like putting your own oxygen mask on first, then they're better able to support students. So there has to be a balance and I think school systems are forced to think about that a little bit more intentionally now that we went through last year in that difficult time."