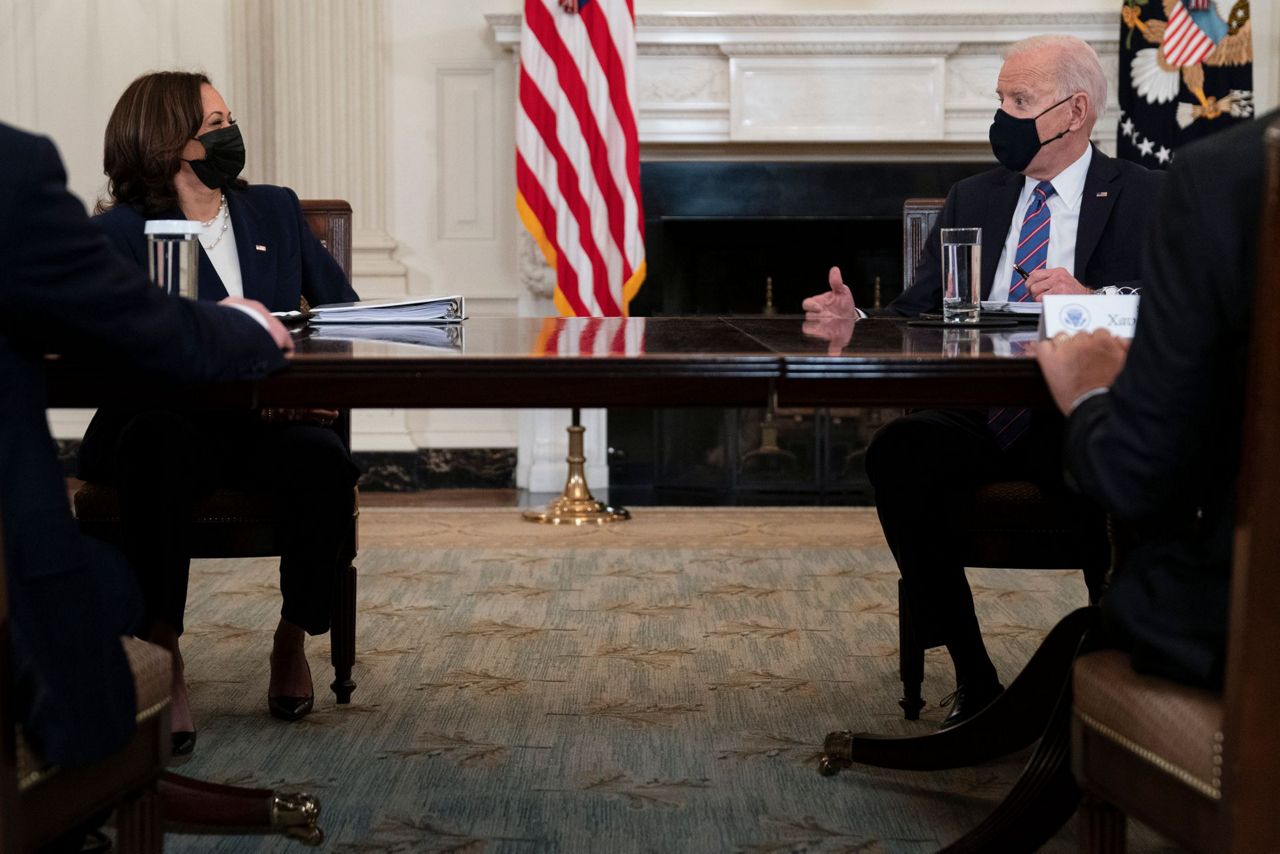 1 of 6
President Joe Biden speaks with Vice President Kamala Harris about the southern border during a meeting in the State Dining Room of the White House, Wednesday, March 24, 2021, in Washington. (AP Photo/Evan Vucci) 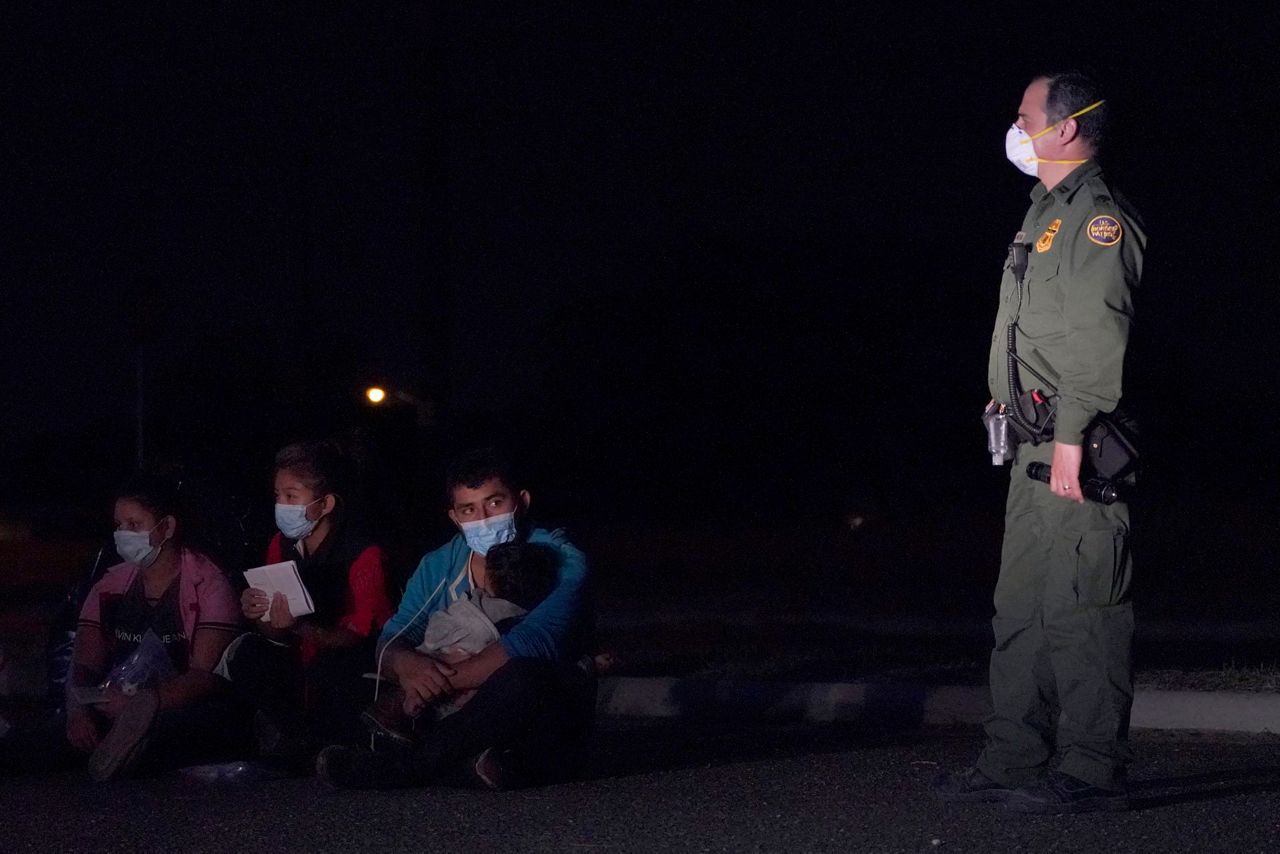 2 of 6
A migrant man, center, holds a child as he looks at a U.S. Customs and Border Protection agent at an intake area after crossing the U.S.-Mexico border, early Wednesday, March 24, 2021, in Roma, Texas. A surge of migrants on the Southwest border has the Biden administration on the defensive. The head of Homeland Security acknowledged the severity of the problem but insisted it's under control and said he won't revive a Trump-era practice of immediately expelling teens and children. (AP Photo/Julio Cortez) 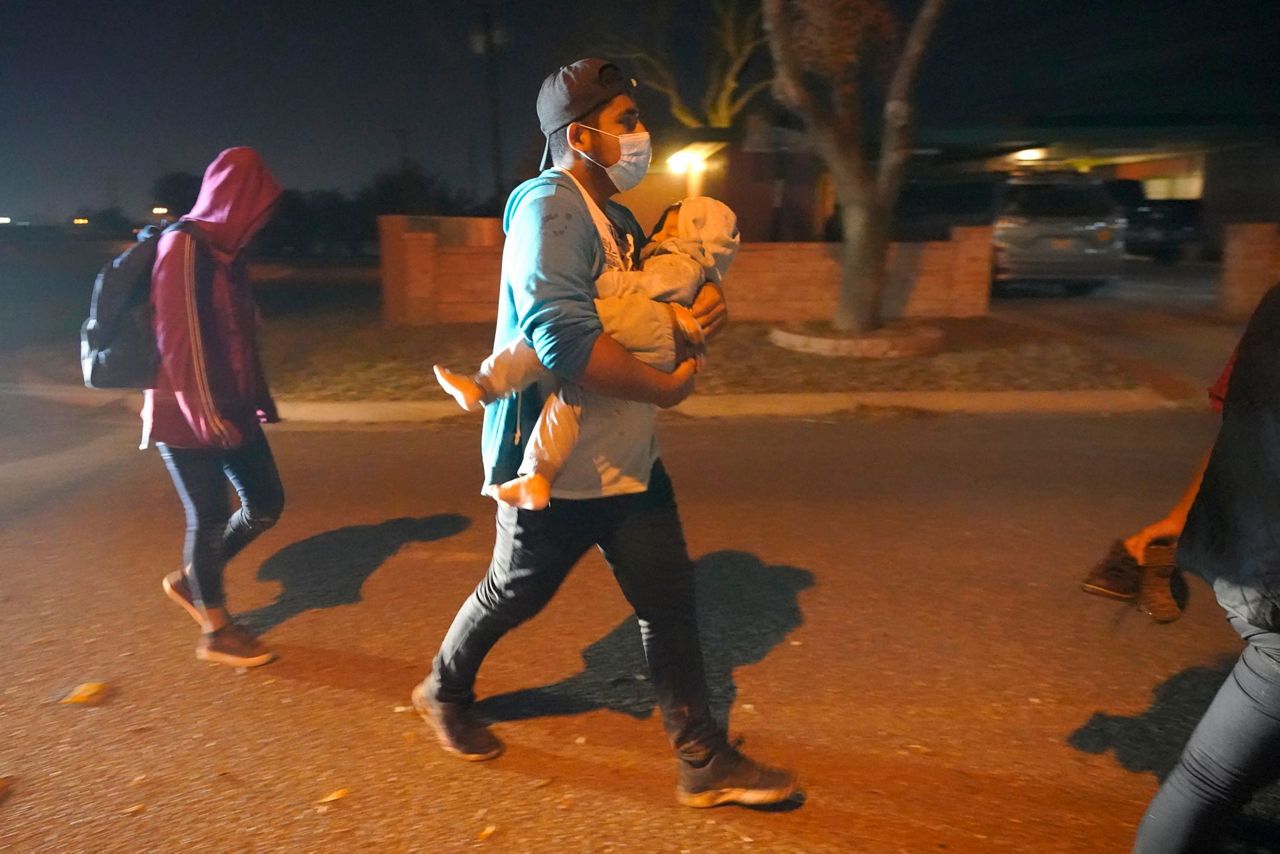 3 of 6
A migrant carries a child as their group follows an official to an intake area after turning themselves in upon crossing the U.S.-Mexico border, early Wednesday, March 24, 2021, in Roma, Texas. A surge of migrants on the Southwest border has the Biden administration on the defensive. The head of Homeland Security acknowledged the severity of the problem but insisted it's under control and said he won't revive a Trump-era practice of immediately expelling teens and children. (AP Photo/Julio Cortez) 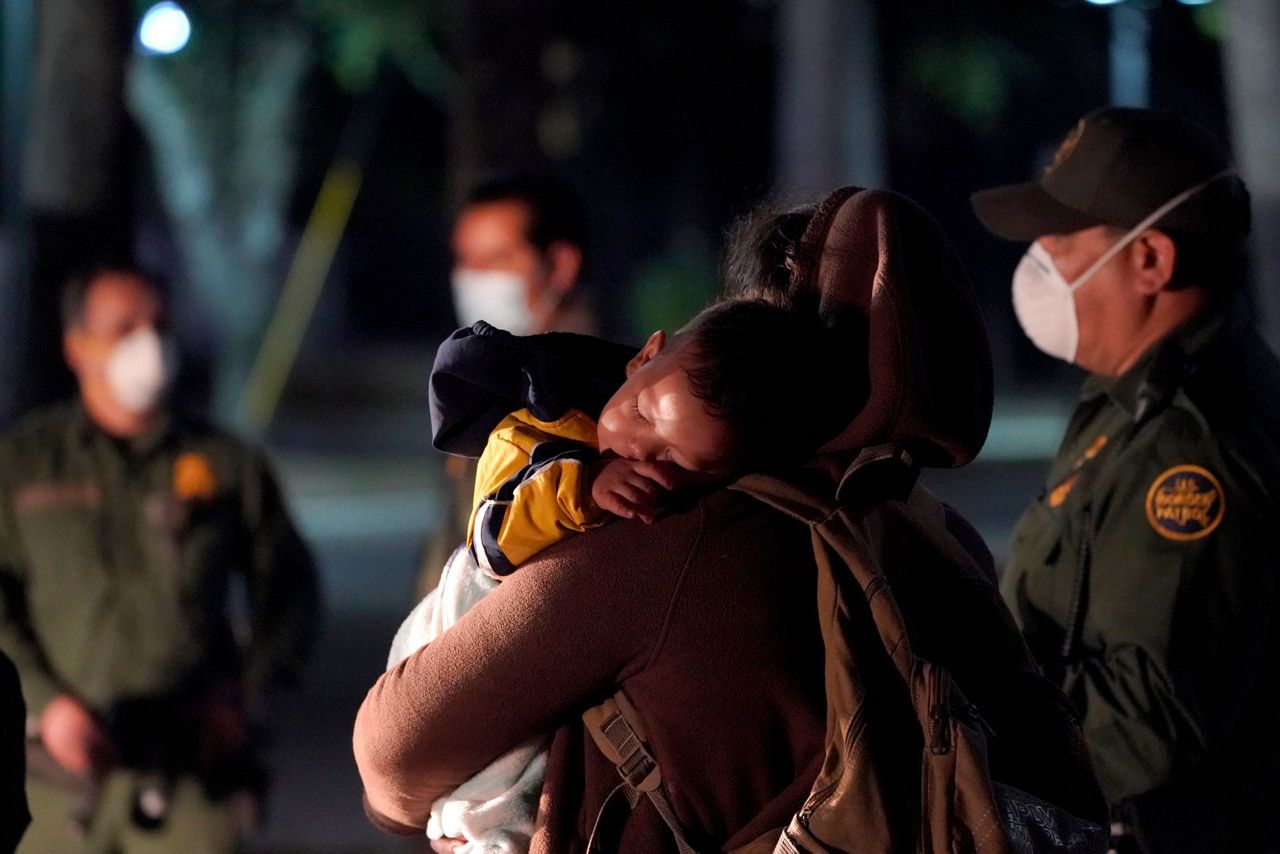 4 of 6
A migrant child sleeps on the shoulder of a woman at an intake area after turning themselves in upon crossing the U.S.-Mexico border, early Wednesday, March 24, 2021, in Roma, Texas. A surge of migrants on the Southwest border has the Biden administration on the defensive. The head of Homeland Security acknowledged the severity of the problem but insisted it's under control and said he won't revive a Trump-era practice of immediately expelling teens and children. (AP Photo/Julio Cortez) 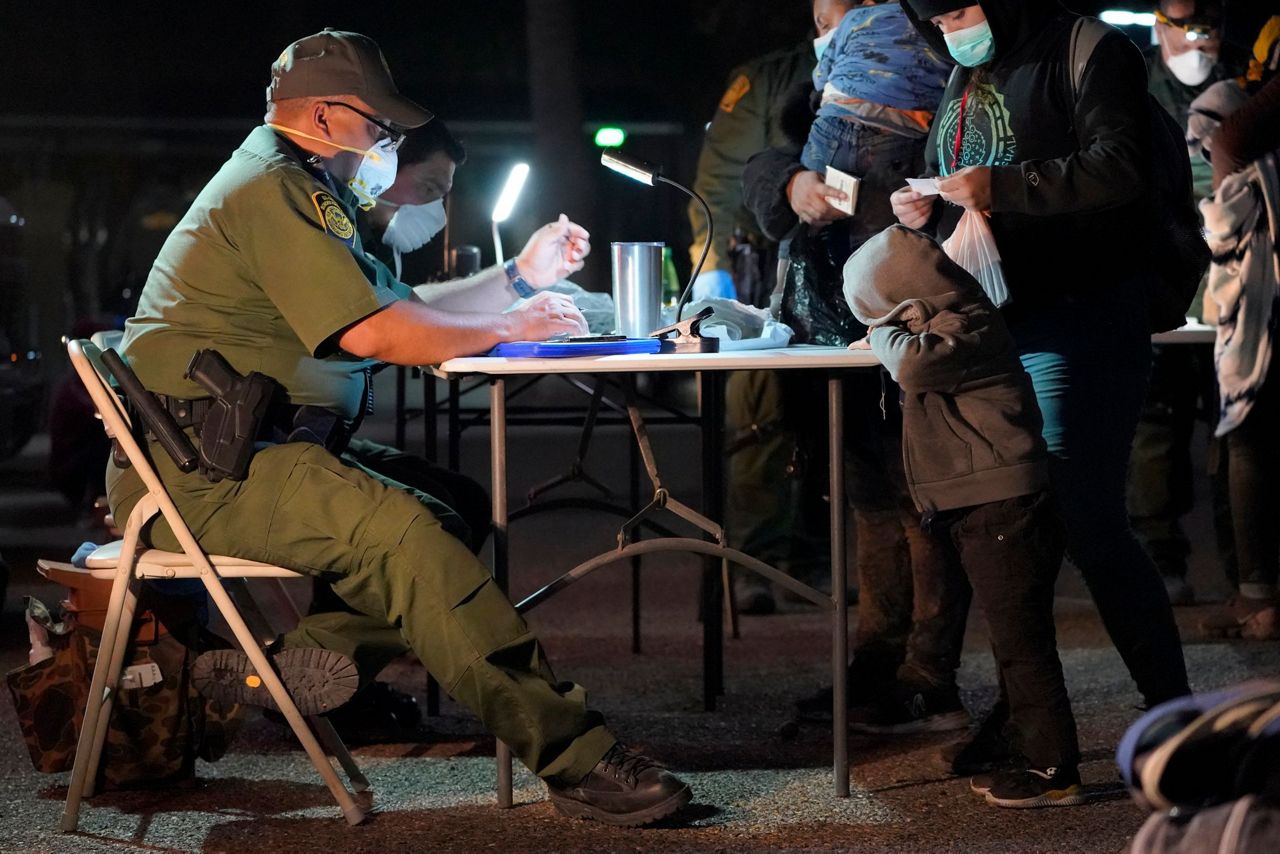 5 of 6
A child rests its head on a table as a U.S. Customs and Border Protection officer processes migrants after they crossed into the U.S., early Wednesday, March 24, 2021, in Roma, Texas. A surge of migrants on the Southwest border has the Biden administration on the defensive. The head of Homeland Security acknowledged the severity of the problem but insisted it's under control and said he won't revive a Trump-era practice of immediately expelling teens and children. (AP Photo/Julio Cortez) 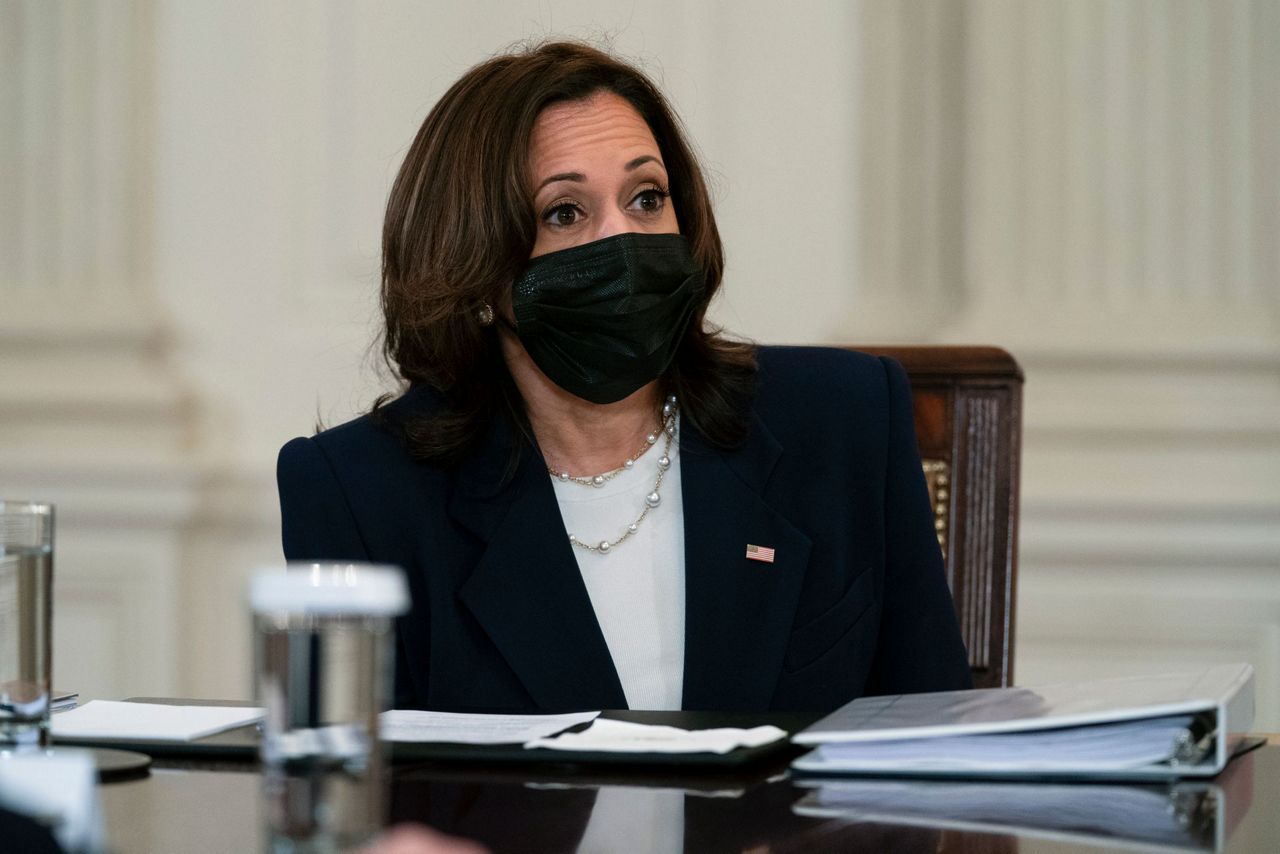 6 of 6
Vice President Kamala Harris speaks about the southern border during a meeting with President Joe Biden in the State Dining Room of the White House, Wednesday, March 24, 2021, in Washington. (AP Photo/Evan Vucci)

WASHINGTON (AP) — President Joe Biden has tapped Vice President Kamala Harris to lead the White House effort to tackle the migration challenge at the U.S. southern border and work with Central American nations to address root causes of the problem.

Biden made the announcement as he and Harris met at the White House on Wednesday with Health and Human Services Secretary Xavier Becerra, Homeland Security Secretary Alejandra Mayorkas and other immigration advisers to discuss the increase in migrants, including many unaccompanied minors, arriving at the border in recent weeks.

In delegating the matter to Harris, Biden is seeking to replicate a dynamic that played out when he served as President Barack Obama's vice president. Obama turned to Biden in his first term to lead the White House effort to draw down U.S. troops in Iraq and oversee implementation of stimulus in response to the Great Recession.

“When she speaks, she speaks for me,” Biden said, noting her past work as California's attorney general makes her specially equipped to lead the administration's response.

Biden, who has faced stiff criticism from Republicans over the increased flow of migrants, is hoping to show Americans he's taking the situation at the border seriously. He also wants to prevent the growing humanitarian and political challenge from overshadowing his administration's ambitious legislative agenda.

But the high-profile assignment for Harris, who ran for the Democratic presidential nomination in 2020 and is expected to run for the White House again in the future, could be politically fraught.

“Needless to say, the work will not be easy,” Harris said. “But it is important work.”

Harris is tasked with overseeing diplomatic efforts to deal with issues spurring migration in the Northern Triangle countries of El Salvador, Guatemala and Honduras, as well as pressing them to strengthen enforcement on their own borders, administration officials said. She’s also tasked with developing and implementing a long-term strategy that gets at the root causes of migration from those countries.

Biden suggested President Donald Trump's decision to cut $450 million funding in 2019 to the region was partly to blame for the situation.

Among the other reasons for the current increase: the thousands of Central American migrants already stuck at the border for months and the persistent scourge of gang violence afflicting the Northern Triangle countries.

Still, the numbers of both unaccompanied minors and families encountered at the border are lower than they were at various points during the Trump administration, including in spring 2019.

For Harris, the assignment gives her the first big opportunity to step to the front of the stage on a matter of enormous consequence for the administration. As the first Black woman elected vice president, Harris arrived on the job as a trailblazer. It has remained opaque how Biden would utilize her.

It's been a mixed bag for vice presidents in recent history who have been made the point person on delicate matters, said Joel Goldstein, the author of “The White House Vice Presidency: The Path to Significance, Mondale to Biden.”

Pence's efforts on the coronavirus were stymied by Trump's hijacking of the task force's daily briefings early in the pandemic. Dick Cheney, who had been charged with leading George W. Bush's search for a vice president only to take the spot himself, carved out what was seen by many critics as a shadow presidency in which he had an outsized influence on shaping Bush's national security policies.

And Gore faced headwinds from Republicans in Congress who were reluctant to give him a win ahead of his unsuccessful 2000 run for the White House.

Biden made the announcement as a delegation of White House officials and members of Congress was traveled to the southern border on Wednesday to tour a facility in Carrizo Springs, Texas, where more than 750 migrant teenagers are being held.

The Biden administration has in recent weeks moved to open more than 10,000 new beds across the Southwest in convention centers and former oilfield camps. It notified Congress on Wednesday that it will open a new 3,000-person facility in San Antonio and a 1,400-person site at the San Diego convention center. HHS is also opening a second site in Carrizo Springs and received approval from the Defense Department Wednesday to begin housing teenagers at military bases in San Antonio and El Paso, Texas.

While acknowledging a “big problem” with the rising numbers of migrants, Rep. Norma Torres, D-Calif., one of five lawmakers to tour the facility Wednesday, credited the Biden administration with treating young migrants far more humanely than the Trump administration.

In an interview after the tour, Torres described children accommodated four to a room, and said she saw no signs of overcrowding. The young people attend school, have access to health care and are given weekly COVID-19 tests. Lawmakers were told 1 in 10 children are testing positive for the virus, but none at the facility had been hospitalized, she said.

“When I look at those kids, I see myself,” said Torres, an immigrant from Guatemala who arrived in the U.S. with her family as a child.

The White House faced criticism for limiting media access to Wednesday’s tour, keeping it to just one TV crew. It has still not allowed media to enter Border Patrol facilities where large numbers of children are detained or HHS sites that it rapidly opened under pressure. The Carrizo Springs facility was established in 2019 during the Trump administration and re-opened in February.

Republican Sen. Ted Cruz of Texas, who is leading a separate delegation of GOP senators to the border later this week, decried the lack of press access as a “muzzling” of the media by the Democratic administration.

“Joe Biden doesn’t want you to see,” Cruz told reporters at the Capitol.

Merchant reported from Houston and Lemire from New York. Associated Press writer Josh Boak in Washington contributed to this report.