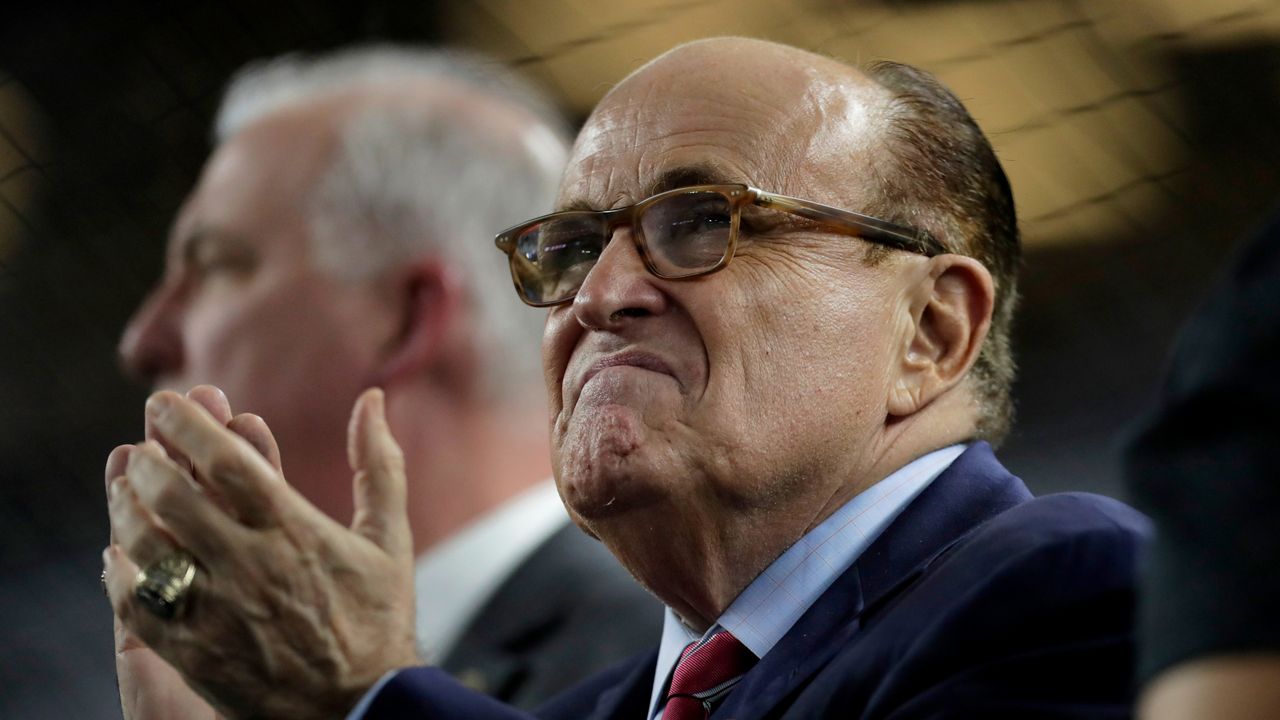 A file image of Rudy Giuliani during the seventh-inning stretch of a baseball game between the New York Yankees and the Boston Red Sox on May 31, 2019. Julio Cortez/AP.

Rudy Giuliani and the Impeachment Hearing: Over 40 Mentions

Although he was nowhere to be seen after ignoring a subpoena, Rudy Giuliani's name was invoked more than 50 times in nearly five-and-a-half hours of testimony in the first public impeachment hearing Wednesday.

At issue is the accusation that as attorney for President Donald Trump, Giuliani allegedly conducted a shadow diplomatic relationship with high-ranking officials in Ukraine while leaning on them to help Trump's 2020 re-election campaign. He allegedly pushed Ukrainians to investigate Hunter Biden, the son of Democratic Presidential Candidate Joe Biden, who sat on the board of a Ukrainian energy company.


"You have a person who has turned from America's Mayor to, right now, America's Exhibit A for how the Trump Administration runs off the rails," said David Birdsell of Baruch College.

Giuliani's public image has undergone many metamorphoses in the years since becoming mayor in 1994, with critics saying he was divisive even as crime plunged during his watch.

Known for a short fuse, Giuliani once infamously snapped at a caller to his weekly radio show who wanted to be able to legally own a ferret as a pet.

"There is something really, really very sad about you. You need help. You need somebody to help you. This excessive concern with little weasels is a sickness. I'm sorry. That's my opinion," Giuliani said on WABC-AM Radio.

But toward the end of his second term, in the wake of the 9/11 attacks, Giuliani was hailed as hero, who helped bring the nation together.

"When you look up there and you don't see the World Trade Center. It's unbelievable," he said on the scene after the attacks.

But in the years since then, as the former mayor began work in the private sector with his own security firm and took on Trump as a client, Giuliani is publicly known more for what some describe as bizarre television appearances:

"There is nothing wrong with taking information from Russians!" he said on CNN's State of the Union.

"This is not new," Birdsell said. "This is a metastasis of something we've seen with Rudy Giuliani for a very long time."

Two foreign associates of Giuliani have already been indicted, and reports indicate Giuliani himself may be in the crosshairs of federal prosecutors. Plus, it remains to be seen what more his role may have been in the president's alleged scheme to engage in a quid-pro-quo with Ukraine.

Breaking Down Giuliani and the Ukraine Investigation