Alberta Clippers and What They Mean in Winter

Have you ever heard your local meteorologist say a clipper would be coming through the area? No, they’re not referring to a basketball team.

Owing their name to the province in Canada in which they often originate, Alberta clippers are fast-moving areas of low pressure. The term clipper comes from one of the fastest ships of the mid-1800s, known as clipper ships.

In the wintertime, warm, moist Pacific air flows into and over the Canadian Rockies. As that air descends on the east side of the mountains, an area of low pressure forms, often in the Canadian province of Alberta.

From here, the storm becomes entangled with the jet stream, typically leading to a southeast motion into the northern tier of the U.S. 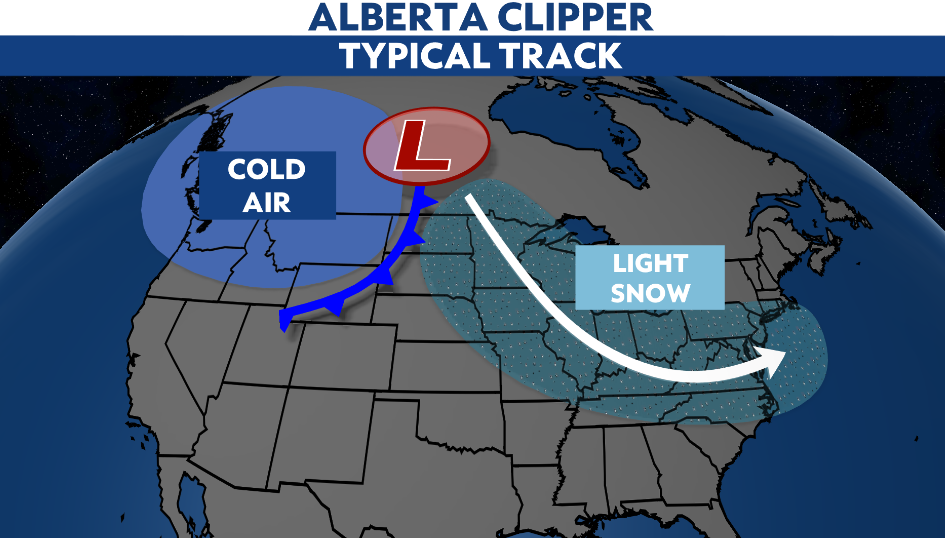 The most often affected regions include the Midwest, Great Lakes, and Northeast. Occasionally, clippers can dive well south, bringing impacts into the Southeast as well.

While most of these storms do form in Alberta, they are not limited to this province. Depending on where the low pressure forms, other names given include the Manitoba Mauler and the Saskatchewan Screamer.

While fun to say, some of these systems can bring serious problems.

While clippers are not known for dumping mammoth amounts of snowfall, people should still take them seriously.

As the name suggests, they move relatively quickly. With few moisture sources to draw from, these storms generally provide a light snowfall to affected areas.

Perhaps more notable than the snow, sharply colder air is often dragged down from the Canadian prairies, leaving a frigid air mass in the storm’s wake.

“A typical Alberta clipper could bring 1 to 3 inches of snow but they are known for bringing in some very cold air as well," said Carroll. "If it is early winter and lake-effect conditions are favorable it’s possible to get a lot more than 1-to-3 inches of snow.”

As the storm moves east, things can sometimes become a little more interesting.

Occasionally, clippers can find favorable conditions for intensification as they move offshore into the Atlantic. When this occurs, a much stronger cyclone can develop, throwing heavy snow and strong winds back onshore.

While they're not often thought of in the same class as blizzards or nor'easters, Alberta clippers are just another type of storm that can make the winter season brutal.