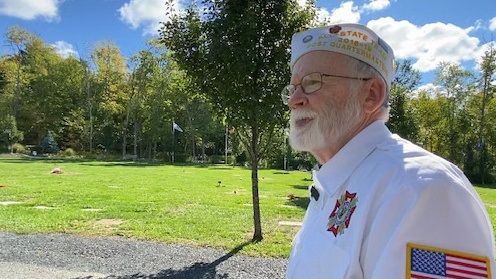 It’s a day to remember 40 American servicemen who lost their lives during a single day in World War I.

All the soldiers were from Orange County, part of the 107th Regiment of the 27th Division.

Since Vietnam veteran David McTamany was 10 years old, their stories have had an impact on his life. "As I learned just what they went through that terrible day, I felt this was not something that we need to forget," said McTamany.

They lost their lives fighting on the front-lines of the Battle of the Hindenburg Line in Northern France. The battle was influential in helping the U.S. and the allies win World War I.

McTamany was part of a group of Orange County residents who traveled to France and had the opportunity to walk in the footsteps of the 40 men exactly 100 years after their death.

"I was able to go to the exact spot that John T. Kenney, which was one of those 40 names, that he was killed," said McTamany.

The day is also a chance to reflect on all of the men and women from Orange County who’ve sacrificed for the country’s freedom over the years. Like the men of the all-Black 369th Regiment who served 191 days on the front-lines, commonly known as the "Harlem Hellfighters," many of whom were recruited in Newburgh and Middletown.

"Such an opportunity to serve would afford them a sort of reason to prove themselves and their people as worthy of full and equal citizenship," said Dr. Jeffrey Sammons, a history professor at New York University.

McTamany thinks about all the young men and women who’ve left their lives in Orange County to venture into the unknown, all out of love for country.

"The sacrifice that they put in without asking a question, they did it for America. We need to understand that’s what made us who we are," he said.