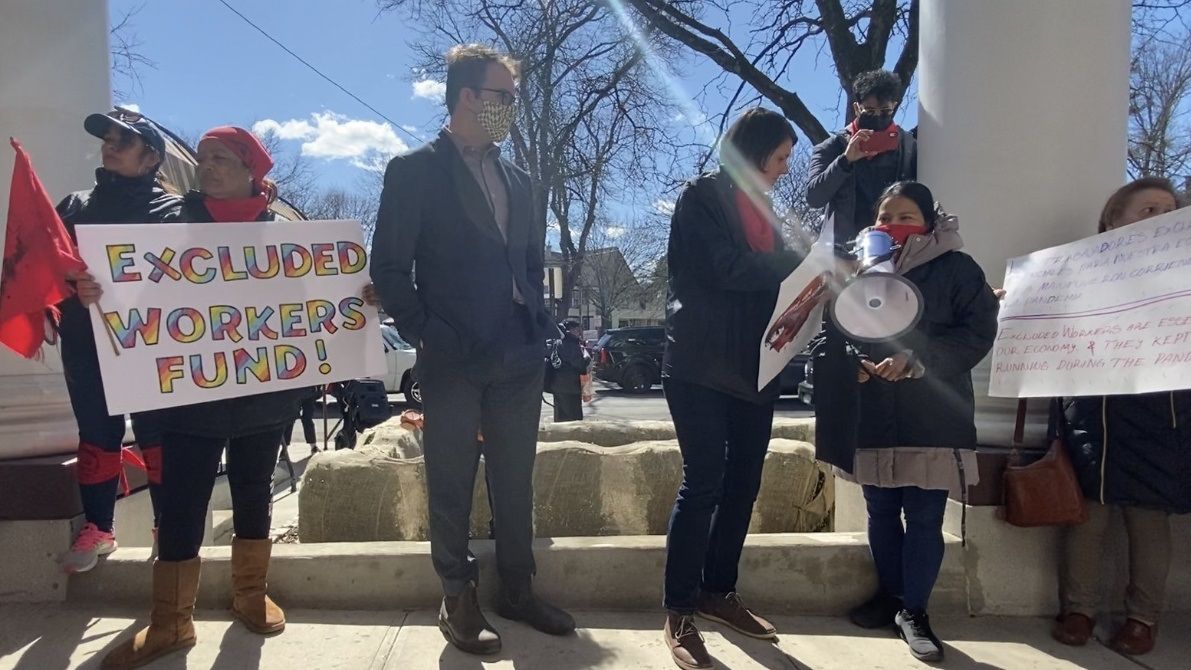 In the latest leg of their journey from New York City to Albany, workers and activists stopped in Kingston on Monday to pressure their state lawmakers to fight harder for $3 billion in the upcoming state budget to replenish the Excluded Workers Fund and establish a health insurance system for the workers.

Excluded workers were not eligible for stimulus checks or unemployment benefits.

Many are undocumented immigrants.

“I tried to get help from the fund,” Ricarda, a mother of four who cleans offices and homes in Kingston, said in Spanish. “I was told the program was closed and there are no more resources.”

Last year’s $2.1 billion Excluded Workers Fund was quickly exhausted. While the state of New York estimates 128,000 workers received assistance from the 2021 fund, the Immigrant Research Initiative found that about 175,000 other eligible workers — like Ricarda — did not receive assistance.

Ricarda said that since March 2020, she only gets about two days of work a week.

She and several other excluded workers rallied outside the Kingston offices of Assemblyman Kevin Cahill and State Senator Michelle Hinchey to pressure them to use their positions to advocate for re-upping the funds before the final budget is due April 1.

The group of about 70 was well received.

“I’m confident the assemblyman will vote in favor of this when it gets to the budget,” Cahill’s spokesperson, Michael Tierney, told the group, adding the federal government should play a larger role in helping excluded workers.

“We look forward to continuing our work with you and all of your organizations,” Bianca Coppola, a spokesperson for Hinchey, said, noting that out of about 1,000 excluded workers in Ulster County who applied for state assistance, about 100 actually received it.

Organizer Emma Kreyche of the Worker Justice Center of New York was not satisfied with the statements. She wants lawmakers to not just to support the workers’ campaign, but to force the issue in Albany.

“We can’t wait until our leaders in Albany feel like it’s time again to throw a bone to immigrant communities,” Kreyche said. “This is something that we urgently need and that urgency has to get communicated, whether they’re given the floor to talk about it or not.”

Opponents of the budget proposal have been direct.

He said the state Legislature should focus more on school funding, infrastructure, college affordability and energy costs. He said improvements in each of those categories will benefit excluded workers, too.

“I think any way we can try to make things more affordable for working families is a step in the right direction for everyone,” he said. “That’s where the focus on this budget needs to be, not parsing out one individual group and making direct payments to them, but rather thinking of ways we can help all the families here in New York.”

The rallying workers insisted the relief should be more immediate.

Ricarda said her daughter recently dropped out of school to get a job to help support the family.

“Children are affected, too,” Ricarda said. “My daughter had to stop going to classes to help me because we can’t keep up with just two or three days of work a week.”