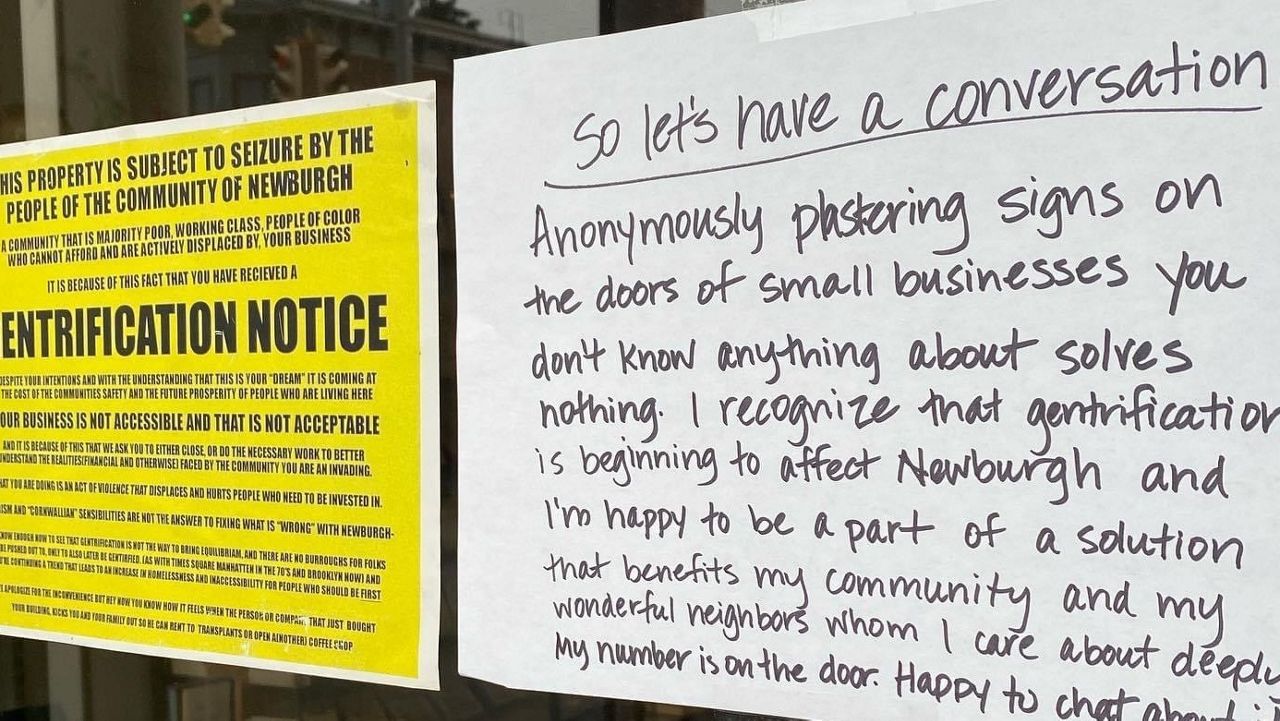 Posters popping up in Newburgh warn of gentrification threat

Someone has been posting ‘gentrification notices' on storefronts along Liberty Street in downtown Newburgh.

The poster is asking business owners to cater more to longtime city residents, not just visitors and wealthy transplants. They accuse the shops of aiding the displacement of local families.

Reed said he is seeing gentrification in real time: Higher-end shops popping up, new people moving in, monthly rents increasing and his friends being forced to leave.

Susan Knapik, owner of Oliver & Chatfield Gift Shop, received one of the bright yellow gentrification notices. She replied on her storefront next to the notice, and in a Facebook group, Knapik said she is gaining understanding of gentrification as she, too, is concerned she might be priced out of Newburgh as development rapidly continues in the area.

Knapik invited housing activists and neighbors to the shop to discuss how to include local people in the city’s success. She said the person who posted the notice has not yet come in for a conversation.

“As long as we don’t allow ourselves to ignore … our responsibilities as humans, I think we can really do something special and different here,” she said.

“They’re angry because they feel left out, and I don’t blame them,” she said over the phone Monday morning. “People are being displaced left and right … I have all these new neighbors who I don’t even know, from Brooklyn and Manhattan buying up properties in my neighborhood.”

But Monteverde also emphasized that she finds it crucial that housing activists unite with small business owners, educate each other, find a consensus and fight together for laws and policy to prevent displacement.

Other communities are facing similar challenges.

Zillow expects home prices in Rochester to increase by 10% over the next year. Buffalo home prices went up 16% just in September, according to brokerage firm Redfin. The city of Hudson was found by a New York Times analysis of postal records to have the greatest increase in net in-migration out of 926 community studies.

Monteverde said she plans to hold community meetings to discuss solutions to keep more residents in their homes.

“It’s going to take the entire community” to find solutions, Monteverde said, emphasizing the urgency of the problem. “It’s right at our door.”