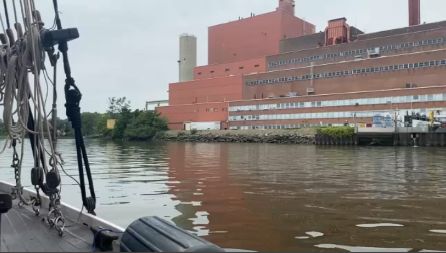 More than 40 kayakers, and 30 others on boats, took to the Hudson River this past week. But they weren't there just to take in the beauty of the river.

Organized by Food and Water Watch and Sloop Clearwater, activists like Hollo held an on-the-water protest in front of the Danskammer Power Plant. The activists protested the proposed expansion of the power plant, which would create a fully operational fossil fuel plant. Instead, they say they want a green alternative that would protect public health, and water and air quality.

“It’s an eyesore," Hollo said. "That point could be used for so many other community purposes. What we don’t need up here is a dirty fossil fuel power plant.”

But according to a statement from Danskammer Vice President of Public Affairs Michelle Hook, Danskammer will “dramatically and immediately improve air quality,” by replacing “its 70-year-old facility with the newest emission-control technologies …”

Hollo, a member of the Newburgh Clean Water Project, says she fell in love with Newburgh when she moved there five years ago.

That is why ever since moving there, Hollo says she has worked to make sure the environment in and around the city is clean and healthy. And this protest was part of that, using the natural resources they want to protect to send their message.

Activists spent nearly four hours in the sun, but Hollo says it was well worth the time.

For those unable to make it, Hollo said there’s a hearing August 23, and registration can be found at this link.