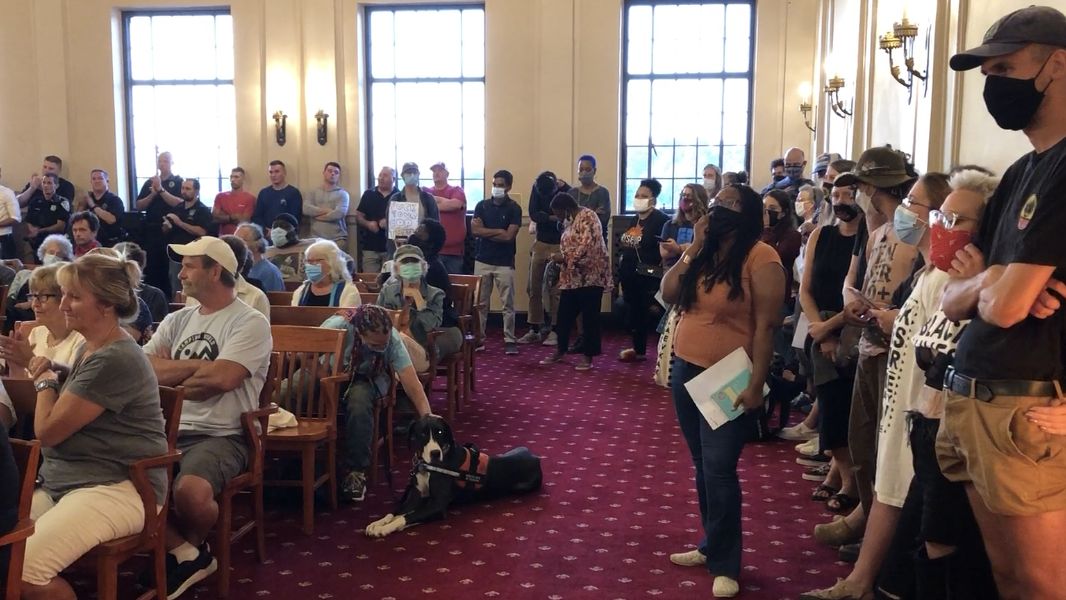 There was a confrontation before Tuesday evening’s marathon City Council meeting even began.

Police met a group of more than 50 protestors at the side door of Kingston City Hall to tell them the council had decided to ban signs in the meeting, during which the council would vote on whether to allow the police department to acquire an updated armored vehicle.

Some signs carried messages such as “Stop the Tank” and “Defund the Police.” Others had images and names of people who have died during violent incidents with police.

After an argument, the protestors, organized by activist group Rise Up Kingston, put their signs down, went upstairs to the council chamber and created new signs. Some even wrote messages on their bodies.

Inside the chamber, the crowd seemed an even split of people for and against the city using federal grant money to purchase a 2004 Lenco Bearcat to replace the police department’s broken-down 1979 Dodge Peacekeeper.

Police department leaders and their supporters stressed during this and several previous meetings that “this is not a tank,” and it would be used only for hostage situations, severe weather events, a mass shooting or other dangerous scenarios.

Before it broke down two years ago, the department’s Peacekeeper vehicle was last used during a situation involving a barricaded subject, Police Chief Egidio Tinti said Tuesday.

Kingston Police Commission member Donald Mapes took the podium to try to convince the council and his neighbors that police officers need an armored vehicle for the same reasons they wear bulletproof vests.

“They need the protection to be able to go in there and do things that us citizens and everybody else can’t do. They need to be protected,” Mapes said, before shouting and energizing supporters. “Yes, we do have problems, but guess what? We deal with them.”

People who were against the city acquiring the vehicle said they have concerns about how the vehicle looks, but a more common theme in their comments was the issue of trust.

“People don’t trust the police,” Goldberg told the City Council. “This is a political problem for you, because every time you pull this s— and try and do this stuff, you make more of us and you delegitimize yourselves, the government. You’ve got an issue here. I don’t know. Deal with it.”

The council ultimately voted 6 to 2 to approve the police department’s request for the vehicle upgrade, receiving a round of applause from approximately 15 police officers.

“I understand their concerns,” Chief Tinti said of the protestors after the meeting.

Tinti said well-publicized incidents involving police in other communities might be shaping some people’s’ views of Kingston police.

“It’s not occurring in Kingston,” Tinti said. “We have not had these events. I’d like to thank the men and women who serve in Kingston and the Town of Ulster, because we’re professional, we’re accredited and we’re transparent. We’re out there doing the job.”