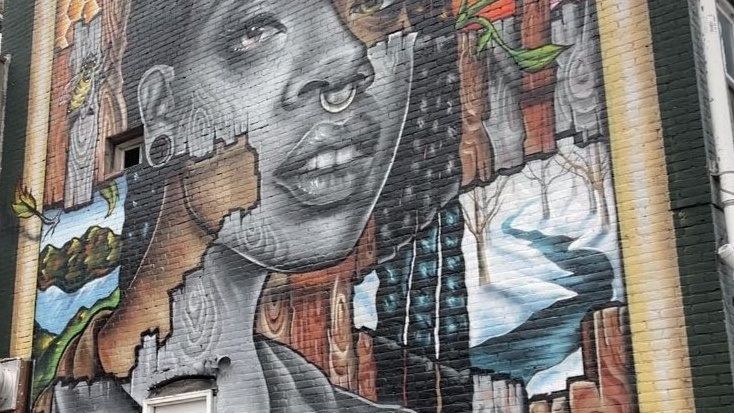 "Newburgh is home, Newburgh is heart, Newburgh is beautiful," said Newburgh native and member of Celebrate845 Tiera Nolcox. "Sometimes, I feel like a lot of times people take advantage of Newburgh."

Tiera Nolcox was born and raised in Newburgh. When she saw the new mural on the wall of 181 Broadway, she was intrigued, at first.

"I want to know that person. I am that person, but the person who drew that, or who came up with the concept, does not represent Newburgh. Period. At all."

Celebrate845 is a Hudson Valley group with a goal of supporting marginalized artists from around the region. They say the artist who created the mural isn’t from Newburgh.

"This should’ve been a young artist from Newburgh," said Nolcox.

Spectrum News reached out to the artist for comment, but he declined to speak with us.

Celebrate845 says he was recruited by Seraphim Equities, a Long Island-based real estate firm, to create the mural as part of a new arts festival they're promoting called Hudson Valley Hype. Celebrate845 wants to see that festival canceled.

"It's just self-serving, it's not uplifting the community," said Nolcox.

Celebrate845 states it’s part of Seraphim Equities' plan to push gentrification in the city by creating murals on the side of buildings, subsequently raising property values and pushing out low-income Newburgh residents.

"Instead of using their resources for kids' programming that already exists here," said Celebrate845 founder Jamie Sanin, "they want to fund these murals and bring new people in."

At a Newburgh Architectural Review Commission meeting on April 13, Seraphim Equities presented proposals to create two new murals on properties they own on Broadway and Clark Street.

Alexandra Church, Newburgh's director of planning and development, says the proposals for the new murals were tabled because they failed to present adequate information about what type of paint would be used in the murals. They will have the opportunity to present their proposal for the new murals at the next meeting.

In the meantime, Celebrate845 says they’ll continue its fight against Seraphim Equities. They’re demanding the group invest money in the city, instead of creating new murals.

"Seraphim should dedicate their tools and resources to the community during a pandemic," said Sanin. "So housing, food access, clean water, so if you really want to show up for the community, this is what we need."