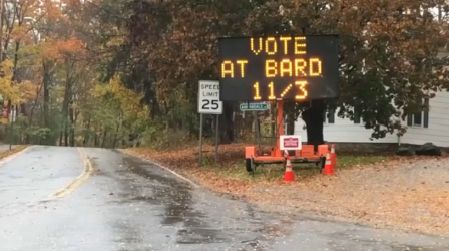 With Election Day less than a week away, Dutchess County’s Democrat and Republican Election commissioners have come to an agreement regarding polling sites in Red Hood’s District 5.

Voters will be able to cast their ballots at the original polling place, St. John’s Church in Barrytown, and they will also be able to vote at Bard College.

“The current polling site is about a mile and a half from here. It's on an unsafe and unlit road. It is not ADA compliant, and most importantly this year, you cannot safely socially distance there,” says Bard College Executive Vice President Jonathan Becker.

He says that 65% of the voters in the district come from the Bard campus and with the pandemic it makes more sense to let them vote there.

“The most important thing is the room you're in is three times larger than St John's Episcopal down in Barrytown where the only other polling site was where even the church officials say it's impossible to socially distance. We know here you can easily socially distance,” says Becker.

The school has already taken steps to make sure the campus is safe.

Becker says, “Bard has taken numerous safety precautions about COVID we're very used to that. We thus far this year we have had zero, COVID cases, with nearly 5000 tests submitted. So we have numerous requirements social distancing, mask wearing, hand sanitizing, and so forth.”

According to Becker, the Board of Elections has already visited the location where voting will take place.

“We have a plan roughly to have something like 10 voters in here at once and then the rest waiting, out, out of the room with us, you know, again ample space for them to be socially distant,” says Becker.

Bard College hopes to make the school a permanent voting site for future elections. In the meantime, Election Day is ‪this Tuesday, November 3.