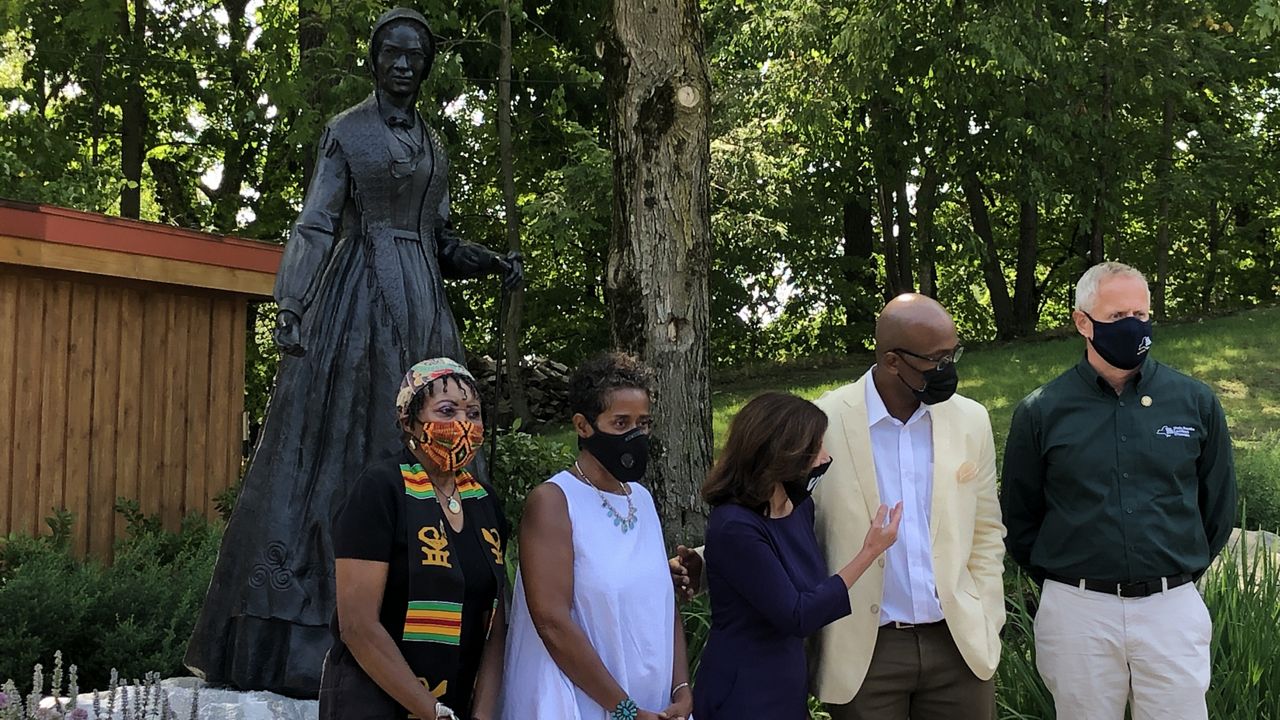 It was a moment years in the making as a descendent of Sojourner Truth joined Lieutenant Governor Kathy Hochul, and New York State Parks, Recreation, and Historic Preservation officials for the unveiling of her statue at the Highland entrance to the Walkway Over  the Hudson.

“It’s just a great feeling,” said Cory McLiechey, Truth’s fifth generation grandson. “Because she would never imagine in a million years that she's being honored like this and recognized so for me to be here to accept that endorsement of her so to speak, like this acknowledgement of her legacy is just incredible.”

When the state announced they were looking to place a statue of Truth at the walkway, Yonkers-based sculptor Vinnie Bagwell stepped up to create the 7 foot tall, 1,000 pound bronze statue.

“Not enough people know the story of Sojourner Truth. In my experience, too many people [mistake her] for Harriet Tubman," Bagwell said. "So I really felt that since this is a great part of New York history and I'm a New Yorker and I want to tell that story. I want people to understand the value of her life.”

While working on the piece Bagwell met Truth’s family to help bring more meaning to the sculpture.

“I’ve enjoyed knowing her family and getting to hear some of their intimate stories.  Just being able to deliver this to make a mark for the family, as well as for New York, as well as for Poughkeepsie and Highland,” Bagwell said.

The abolitionist and suffragist was born into slavery in Ulster County in the late 18th century as Isabella "Belle" Baumfree but changed her name after she escaped.

McLiechey says seeing his ancestor commemorated for her fight is something he and his family are honored to see.

“When the people walk by with their children or whatever and the children inquire who is that hopefully the parents will be able to tell their kids who she was and what she did not just for Ulster County and slaves and women alike but for humanity," McLiechey said.

The statue’s skirt depicts moments of her life like the image of an enslaved woman holding her child and the inscription “The Truth is Powerful and It Prevails.” Her family plans on making sure these moments are never forgotten.

“Without her will to live to continue on throughout all the trials and tribulations, I would not be here today,” McLiechey said. “You know, so it's my obligation to carry on her legacy in a bold and courageous and fearless way.”

During the ceremony historian Dr. Margaret Washington from Cornell University wanted everyone to know that Sojourner Truth was not a “runaway slave” but rather a woman who walked away from slavery.