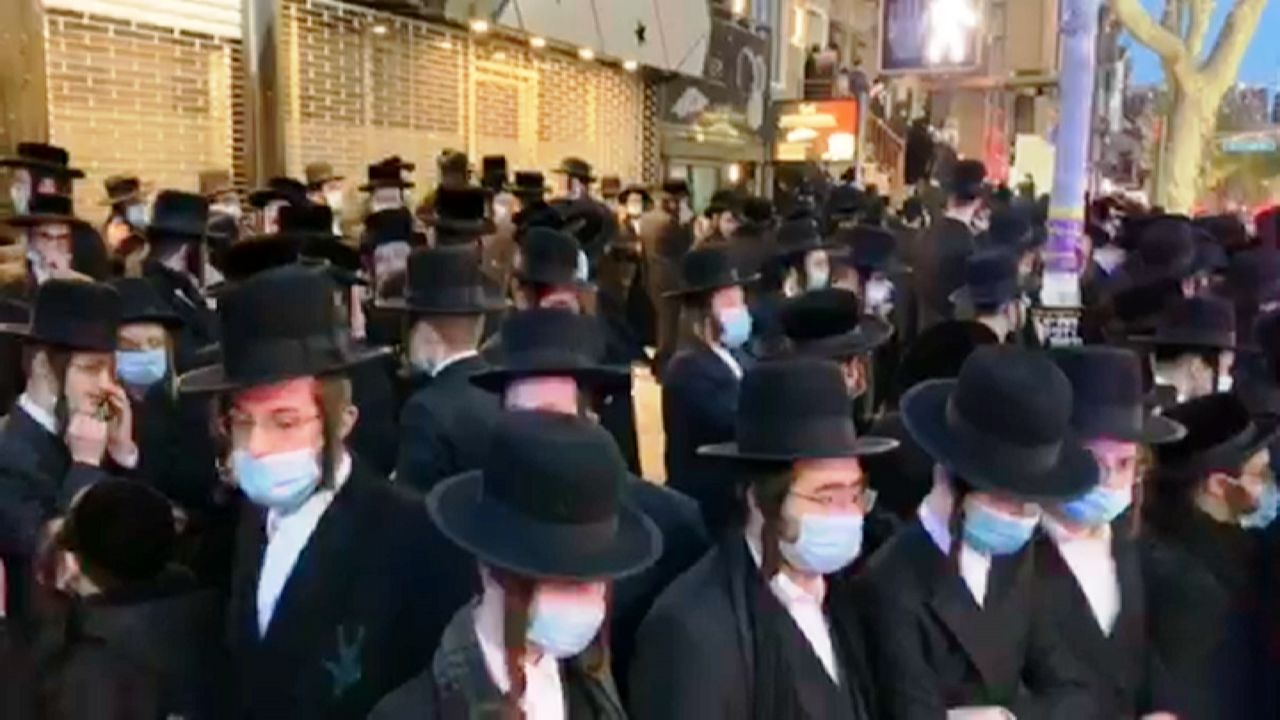 Mayor Apologizes for Tweet, But Stands by Criticism of Orthodox Funeral in Williamsburg

It came after about 2,000 mourners lined Bedford Avenue and Rutledge Street in Williamsburg on Tuesday evening.

Shortly after receiving reports that a large funeral gathering for a prominent Brooklyn rabbi was spinning out of control, the mayor decided to take matters into his own hands.

“I could not believe my eyes," de Blasio said Wednesday. “It was deeply, deeply distressing. Again, this is a community I love.”

Large gatherings are banned as part of regulations needed to prevent the spread of the new coronavirus. Speaking at City Hall, the mayor said the gathering was outright disturbing to see because of the sheer volume of people not observing the six-foot social distancing rule.

De Blasio arrived in Williamsburg shortly after 7 on Tuesday evening. He huddled with police officials and Police Commissioner Dermot Shea after the local precinct struggled to disperse the crowd. Shea said about a dozen summonses were issued.

Then, he fired off a tweet, condemning those who gathered:

My message to the Jewish community, and all communities, is this simple: the time for warnings has passed. I have instructed the NYPD to proceed immediately to summons or even arrest those who gather in large groups. This is about stopping this disease and saving lives. Period.

But he set off a growing wave of condemnation from many different parts of the Jewish community for what some saw as a broad brush painting an entire religious group with blame:

This is very disturbing.
What happened tonight in Williamsburg is completely unacceptable.

Mr. @NYCMayor: it is also completely unacceptable to call out the entire Jewish community especially as a group that has been endlessly under attack in NYC. https://t.co/LWel1zqQMj

When orthodox Jews in NYC were enduring a measles epidemic, they were met with attacks not empathy.

When they were enduring a wave of anti-semitic attacks they were ignored.

Now in the midst of a pandemic they are being scapegoated based on actions of a few.

David Pollock, associate executive director at the Jewish Community Relations Council of New York, said he understood the mayor's frustration, but he stressed he should have chosen his words more carefully.

“Words matter, and people who are extremist tend to take words out of context in order to empower themselves,” Pollock said. “So we want to remind every leader, not just the mayor, that words matter. We understand that the mayor was frustrated and angry when he saw what was happening.”

Some local leaders blasted the mayor's generalization of the Jewish community.

"To speak to an entire ethnic group as though we are all flagrantly violating precautions is offensive, it's stereotyping, and it's inviting antisemitism,” City Councilman Chaim Deutsch tweeted. “I'm truly stunned.”

The next morning, the mayor apologized.

“I regret if the way I said it in any way gave people a feeling of being treated the wrong way. That was not my intention. It was said with love, but it was tough love. It was anger and frustration and what I saw,” de Blasio said.

Police officials said they initially attempted to put in a contingency plan in place in the event a crowd began to gather. But chaos ensued.

“The concern was, there was a local volunteer patrol that was out in force trying to enforce social distancing. It didn’t work,” Pollock said.

Critics said any plans for contingency sent a signal the gathering was sanctioned. The NYPD says a contingency plan does not mean the department condones any sort of gathering

Shea said the gatherings were putting officers at risk, and he said the department would no longer tolerate such events.

“People have to be accountable for their own actions regardless of what neighborhood, ethnicity, where they come from,” Shea said. “We cannot have what we had last night. We will not tolerate it.”

De Blasio refuted any charges of bias by pointing to his longstanding ties to many members of the Jewish community.

As a councilman, he represented heavily Orthodox neighborhoods including Borough Park. The Orthodox community in Brooklyn has been hit particularly hard by the coronavirus crisis, with hundreds of deaths, including several revered rabbis.

But on Wednesday, the mayor threatened aggressive enforcement, arrest and summons should similar gatherings continue.

“I have no regrets about calling out this danger and saying we're going to deal with it very, very aggressively,” de Blasio said.

We have lost so many these last two months + I understand the instinct to gather to mourn. But large gatherings will only lead to more deaths + more families in mourning. We will not allow this. I have instructed the NYPD to have one standard for this whole city: zero tolerance.

The mayor said the reason he was so shocked and frustrated Tuesday night was because of the "clarity across the board" he has had with the Jewish community and its leaders during the coronavirus crisis.

The mayor also contested the comparison of the massive funeral gathering crack down to the crowds who gathered all across the city to watch the military flyover on Tuesday.

"Anyone who equates a small number of people around a blanket in a park, to what happened last night is missing the point," de Blasio said.

Tolath Yakov Synagogue, which held the funeral, issued a statement saying it had planned to close streets so mourners could practice social distancing.

But it said people did not follow the rules and, in the synagogue's words, "chaos" broke out.