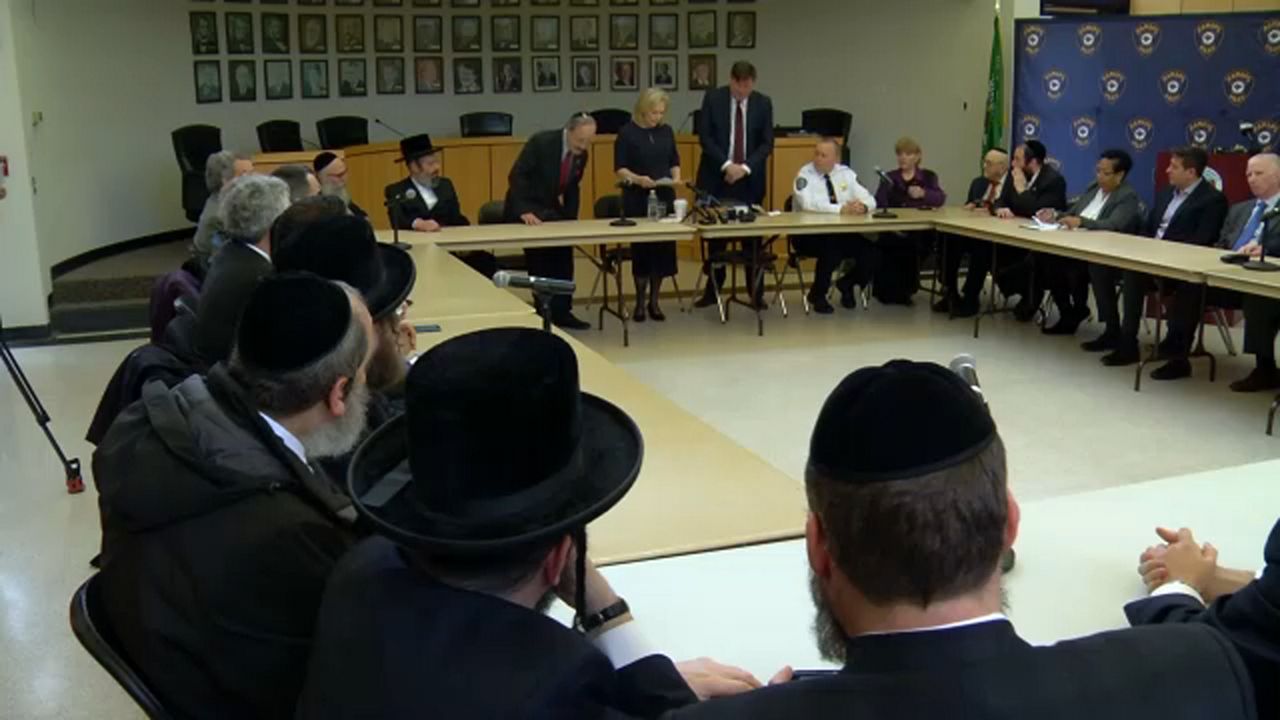 At a press conference held in Rockland County Monday, county officials teamed up with a private security company to announce a new security program to safeguard area synagogues following the stabbing at a Monsey Hanukkah celebration Saturday night.

"So how do we help? Do we put big guys in big trucks with big guns? Is that how we do it? No," said Pat Brosnan, the CEO of Brosnan Security. "We're a technology-infused intelligence company, we leverage technology with data, we leverage data with labor."

Brosnan Security pledged to offer security services free of charge to the county.

"We decided to step up and provide immediately, as of yesterday afternoon, an armed security patrol comprised of off-duty and retired FBI agents, State Police, and NYPD detectives who are highly trained to help minimize a reoccurrence of this horrible event," said Brosnan.

#BREAKING: Rockland county Officials just announced private security group Brosnan Security has volunteered their services to the county to safeguard synagogues that feel they are at risk following the #MonseyStabbing @SPECNewsHV pic.twitter.com/yiMdRUo2kR

The company's founder and CEO says those patrols would continue until further notice.

"At which time I can't say, could be a month, could be six months, free of charge volunteering our services 'round the clock," said Brosnan.

Jewish community leaders at the event applauded the announcement.

"I live seven minutes away from the attack so it is very important and reassuring when government takes security to the next level and this time the public private relationship," said Yossi Gestetner, co-founder of OJPAC Orthodox Jewish Public Affairs Council. "Hopefully this level of security will be more permanent, more long-term than what we have seen in the past."

Congressmen Eliot Engel (D-16) speaking today on the #MonseyStabbing “we have a problem in this country that we’re going to have to resolve” —the representative says local federal and state authorities will have to work together to end the hate—more on @SPECNewsHV pic.twitter.com/v9OZfo5JRI

Sen. Kirsten Gillibrand held a roundtable discussion later in the day at the Ramapo Town Hall, bringing together community leaders to listen to their concerns following Saturday's attack.

"Unfortunately we saw this coming, we had meetings, numerous meetings, with different leaders, different parties," said New Square Mayor Israel Spitzer. "We failed miserably and this is the result."

"We heard from mothers, we heard from fathers who bring their children to school and are afraid that they will not be safe, that is not something we as Americans should have to tolerate," said Gillibrand.

#HappeningNow @SenGillibrand speaking at a round table with Jewish community leaders in the Town of Ramapo —calling for an end to anti-semitism in our nation “we have to speak out in one voice that we do not support hate filled rhetoric” —more on @SPECNewsHV pic.twitter.com/qsMMgbTgs0

Gillibrand encouraged leaders to apply for grant funding to help secure their schools and places of worship.

"One of the few ways that we can do this is by continuing to fight for funding for not-for-profits under the Not For Profit Security Program," said Gillibrand.

For now, Town of Ramapo Police and New York State Police have stepped up patrols throughout the community.

The suspect, Grafton Thomas, is now facing federal hate crime charges. He was charged with five counts of obstructing the free exercise of religious beliefs with a weapon and intent to kill.