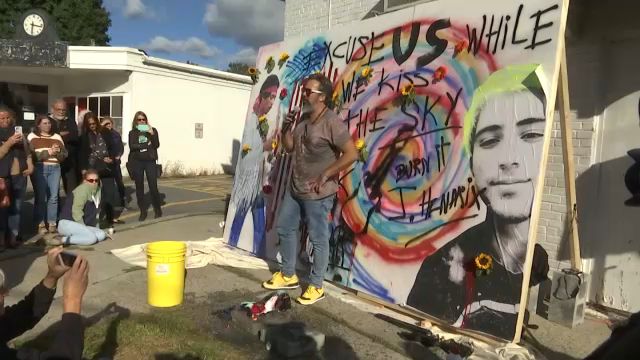 Parents of Parkland Shooting Victim Use Art as Activism

Manuel and Patricia Oliver lost their son, Joaquin, when a gunman opened fire on February 14, 2018, at Marjory Stoneman Douglas High School in Parkland, Florida. The Olivers say they moved to the U.S from Venezuela in hopes of a safer life for their kids.

"It's very ironic. We were looking for a safe future for our kids and then we were just part of the statistics and now Joaquin is another victim of gun violence," said Manuel Oliver, Joaquin Oliver's father.

Their grief turned into activism after their son's death.

Manuel and Patricia appeared at the Woodstock Film Festival on Friday for the premiere of "Parkland Rising," a documentary following high-school students and families, including the Olivers, who became leaders in the gun reform movement after the 2018 shooting.

Before the premiere, Manuel held an art installation he called "Walls of Demand" — where he created murals in different cities, combining local stories with Joaquin's.

"I don't see any other way of continuing with my life than what we do now," Manuel said.

The mural in Woodstock highlighted Joaquin's love for music and Jimmy Hendrix. The holes represented bullets, filled with flowers to commemorate the victims.

"You can be part of a solution, you don't have to be going through what I'm going through or what my wife is going through, or actually what Joaquin went through, to start demanding changes to our politicians and to our laws," Manuel said.

The Olivers say they plan to keep their activism going for the rest of their lives to honor their son.