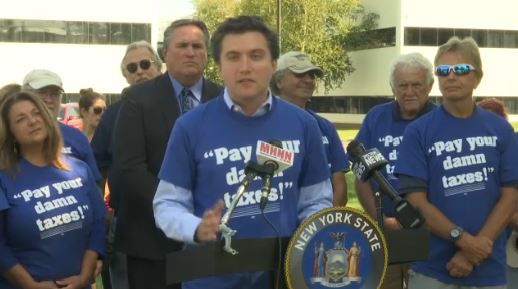 Senator Announces Investigation Into Company and IDA Over Taxes

Several Town of Montgomery residents and Senator James Skoufis (D - District #39) are taking issue with Medline Industries' plans to relocate a medical supply distribution center from their current Wawayanda location to 120 acres off of I-84 on Route 416 in Montgomery.

For months, an informal community group has been fighting Medline's plans out of concerns about the environment, congestion and the potential burden on taxpayers.

Senator Skoufis, the chairman of the New York Senate Committee on Investigations, said at a press conference outside Montgomery Town Hall on Tuesday that he believes Medline is trying to run a tax scam on local taxpayers, by switching locations and asking a new entity for a new set of tax breaks.

"I think anyone who's objective realizes this application is a joke and it's looking to take advantage of taxpayers," Skoufis said, with about 40 supporters wearing matching blue shirts donning a new slogan: "Pay Your Damn Taxes."

Medline's ten-year tax relief agreement, known as a Payment In Lieu of Taxes (PILOT),  with the Orange County Industrial Development Agency for its Wawayanda location is about to expire.

Beginning earlier this year, Medline has been asking the Town of Montgomery IDA for a new 15-year agreement with a yearly tax break of $2.7 million.

According to Medline's application with the Montgomery IDA for the tax relief, the company would net almost $75 million in its first year at the new location, and would net nearly $77 million with a tax break.

Senator Skoufis questioned the timing of Medline's actions and whether a tax break authorized by another local IDA would be necessary to secure the new project in the area along with approximately 500 jobs, especially since Medline has already bought the 120-acre site for $17.6 million.

"As they are about to start paying a full property tax bill, they decide to pick up their stakes, relocate and attempt to start a whole new round of tax breaks," Skoufis said. "What a coincidence. This, my friends, is nothing short of a scam."

A Medline spokesperson told Spectrum News Tuesday afternoon that Medline has outgrown its 500,000-square-foot facility in Wawayanda, "and is expanding to meet the growing need of healthcare providers in the region," and prefers for its new location to also be in the Hudson Valley.

"In hopes of our employees staying at jobs close to where they live and work now," the spokesperson continued in an email, "we'd prefer to expand locally."

The spokesperson also noted that while in Wawayanda, Medline has paid $3.84 million in property taxes to the Minisink Valley Central School District as well as the municipalities of Middletown and Wawayanda.

The new facility would be more than double the size of the Wawayanda facility, and would allow staff size to increase from 340 to 490, according to Medline's application with the Montgomery IDA.

As part of the investigation, Skoufis said the committee's investigators will soon be sending out document requests to Medline, the Montgomery IDA, the Orange County Partnership, and any other entity that might have helped Medline get tax breaks.

When asked whether the Montgomery IDA has gauged the project benefit level to the community, the board chairman said that preliminarily, Medline may qualify for some level of IDA assistance but nothing is final.

He also told Spectrum News that the application process Medline is following is more transparent than some others.

"Sometimes an applicant proposes a project without the end user being known or in other cases the end user is confidential and the public complains," Board Chairman Jeff Crist wrote in an email Tuesday evening. "In the case of Medline we know the planned end user.