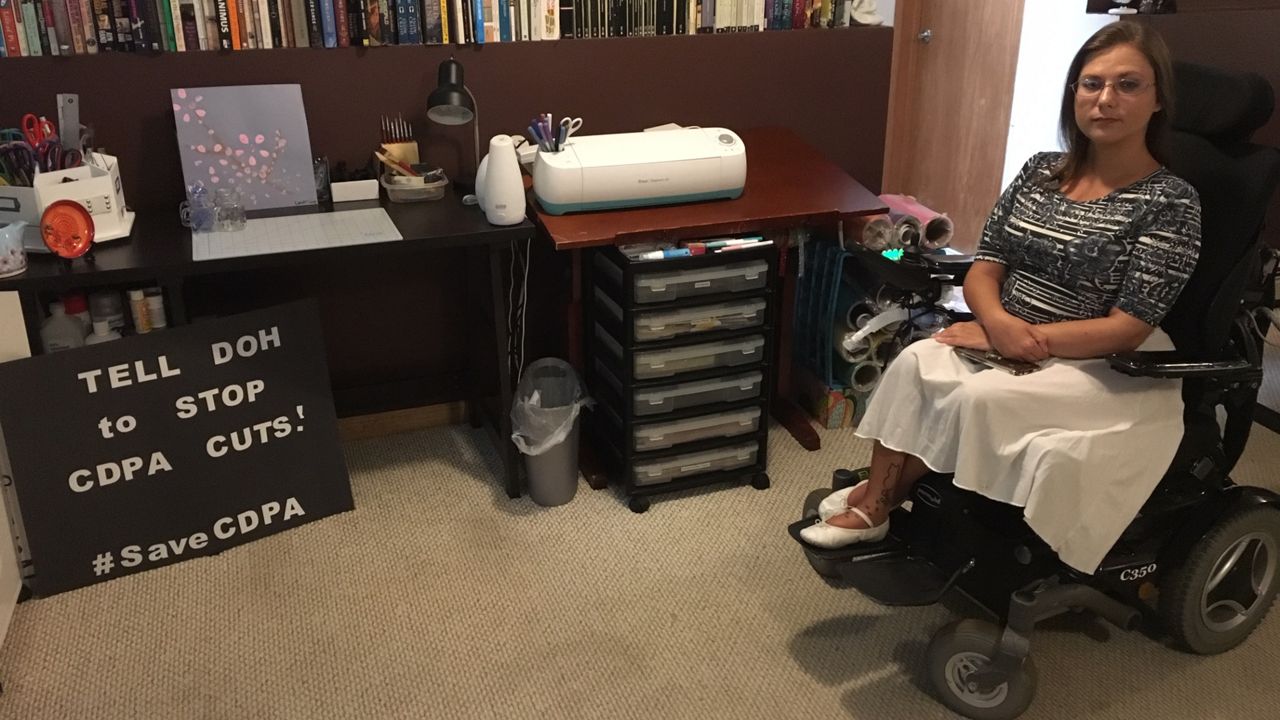 Kendra Scalia has found herself on the front line of a battle to save services and maintain quality of life for more than 70,000 New Yorkers, including herself.

At her home in rural Orange County on Wednesday, she and her in-home personal assistants pondered what her near-future would be if the New York State Health Commissioner successfully implemented drastic cuts to a program that funds her home health care program — which she manages herself.

"I would not go into a nursing home," Scalia said firmly in her living room. "What's the alternative? We don't know. Unfortunately, the alternative could be sitting in bed everyday until I die."

Scalia, 36, has spinal muscular atrophy, a genetic disease that progressively inhibits movement and breathing. She uses a motorized wheelchair to get around her one-floor apartment; especially the living room where furniture and tables are all placed along the walls, allowing for an open space.

Three of her personal in-home assistants, one being Scalia's brother Stephen, were there during Spectrum News' visit. Scalia hires the personal assistants (PAs) through New York's Consumer Directed Personal Assistance Program (CDPAP) — which is facing the cuts, and is the subject of a civil lawsuit filed Monday.

The program serves 70,000 disabled New Yorkers, enabling the recipients, or "consumers," to choose their own PAs and schedule their shifts, according to how many hours of care per day a consumer is approved for by Medicaid.

There are about 100,000 PAs employed through the program. Scalia is approved for an average of 16 hours of care per day that she can schedule how she sees fit.

The program has been widely credited by plaintiffs in the lawsuit for keeping disabled New Yorkers out of institutions and keeping some family members out of poverty, by funding and helping organize self-directed care.

Plaintiffs listed in the lawsuit against State Health Commissioner Howard Zucker include: the New York Association of Assisted Living, the New York State Association of Health Care Providers, and twelve non-profits known in the CDPAP as fiscal intermediaries — also known as "FIs."

A FI handles administrative costs of the program such as management of employee benefits, employee screening, payroll, and tax processing.

The organizations are accusing Zucker of knowingly creating a Medicaid reimbursement structure for the FI's administrative costs that would bankrupt the FIs — which violates numerous federal mandates and portions of state code mentioned in the lawsuit's introduction.

Currently, through a reimbursement system based on number of hours worked by PAs, the FIs can get reimbursed for up to 18 percent of their administrative costs.

In September, through a reimbursement system that would be based on three categories of monthly flat rates, the FIs would get reimbursed for as little as $64 per consumer — effectively causing some FIs to lose up to $2 million per year, according to directors at numerous FIs.

"This just won't work," Scalia said, who also serves on a consumer advisory committee that helps oversee the FI that administers her services. "The math just simply doesn't add up."

In their application to the federal government, to request permission to implement the reimbursement system, DOH officials had to answer how they would "implement a remedy should rates be insufficient to guarantee required access levels" — as suggested by the FIs.

Officials responded they are "currently not aware of any access issues; particularly since there is excess bed capacity for both hospitals and nursing homes." The response floored consumers and their advocates.

"It's absolutely ridiculous to think people who live in their communities should be placed away in an imprisonment-like building for the rest of their lives because we (they) don't want to fully fund — or properly fund — this program," Scalia said.

The FIs and advocacy groups are requesting a judge invalidate the plan, by deeming it "arbitrary and capricious" — a judgement often sought by opponents of government-decided policies who feel those policies are unfair or violate peoples' rights.

There have been meetings to try to keep the issue out of court, by holding several work/group meetings ordered by the legislature, but DOH officials are not willing to compromise on the reimbursement system, according to FIs and advocates at those meetings.

Scalia is wary of receiving help from not just nursing homes, but also large in-home health care agencies that would take away her abilities to set schedules and choose employees. So is her brother and main personal assistant, who could lose overtime and benefits through the changes.

"I'm really concerned this is going to lead to a situation," Stephen said, "where I'm helping my sister more than full-time, not being paid for it, and trying to live my own life while making sure she doesn't end up institutionalized."

Despite near guarantees by FIs they would fold under the new funding plan and their demise would affect consumer care, the DOH said consumers like Scalia will not see changes to service on their end.

“The ‎SFY 2019-20 Budget maintains the state’s full commitment to the Consumer Directed Personal Assistance Program, while strengthening protections to ensure choice, geographic availability, cultural competency, and quality services for the more than 70,000 self-directing consumers who employ their own aide," wrote a DOH spokesperson in an emailed statement Wednesday.

The statement continued, "Consumers will continue to receive services as they do today without any reduction in care, with no change in cost, and the program will continue to be available as it is today to new consumers.”

Several boards and other bodies of government have collectively pleaded to the governor and to DOH officials that they, at the very least, delay the cuts until January 1, 2020, so the DOH can receive more feedback from the FIs, consumers, and the general public.

Forty-six councilmembers signed the letter, warning that such a jolt to the industry could repeat one instance that once cast shame over New York City.

"Our state came a long way from the horrors and loss of humanity that were the status quo of institutions like Willowbrook — which housed people with developmental and intellectual disabilities back in the 1970s," the members wrote. "We don't want to begin the slippery slope that could one day replay that result."