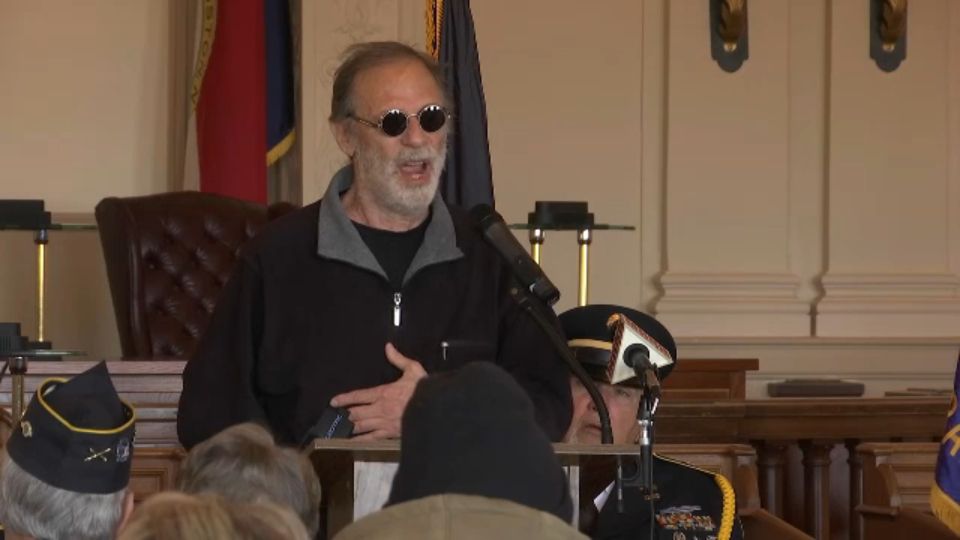 Veteran, Once Discharged due to Blindness, Fights to Keep Other Disabled Vets in Service

On a day of remembrance, Air Force veteran Marty Klein took a moment to talk about those he believes the military has forgotten.

"There are veterans who carry that feeling," Klein said to a crowd of about 100 at a ceremony in the Kingston Common Council chamber on Sunday morning, "like they're on an island."

In 1970 — just two years into his military career — then-Sergeant Klein contracted an eye disease, which eventually blinded him.

The Air Force gave Klein was given an honorable medical discharge, and sent him home.

Klein does not believe a disability such as blindness should disqualify someone from serving in the military, but it does. To be in any branch of the military, one must meet fitness standards and seek a medical waiver — which is not guaranteed — for any disability.

Klein's deep concern about the mental health and dignity of disabled veterans led him to produce the documentary, "Why Can't We Serve?"

The film makes the case for disabled vets — who are still highly functioning — to be allowed to continue their military careers, working in non-combat positions.

Klein said he believes that if the military were to change policy to better accommodate those with disabilities, it could help to decrease the suicide rate among veterans.

"The VA would have less pressure. These guys would have a chance at a career of dignity," Klein said in an interview after the ceremony. "They would have a purpose, and would be less inclined to be disconnected and isolated on that island I talked about."

Klein's previous works — three books and two screenplays — detail his journey to happiness and fulfillment as a disabled veteran trying to find his place in the civilian world.

The film, however, seems to concentrate more on how Klein believes policy changes are in order.

"I hope that we can make a change with the movie," Klein said during his speech. "We'll see what happens with it. It's tough to change the military. It's a big, big ship."

While he has gotten the attention of some politicians , such as Congressman-elect Antonio Delgado — who attended the ceremony and spoke with Klein afterward — Klein said he is going after the people first.

He believes that if he can create a "groundswell of public support," the rest will follow.

Screenings of "Why Can't We Serve" are scheduled for Sunday at 7 p.m. at the VFW on Chester Street and Tuesday, November 13 at 7:15 p.m. at the Rosendale Theatre in Rosendale.

After Tuesday's screening, there will be a question-and-answer discussion with three local veterans, including Klein.