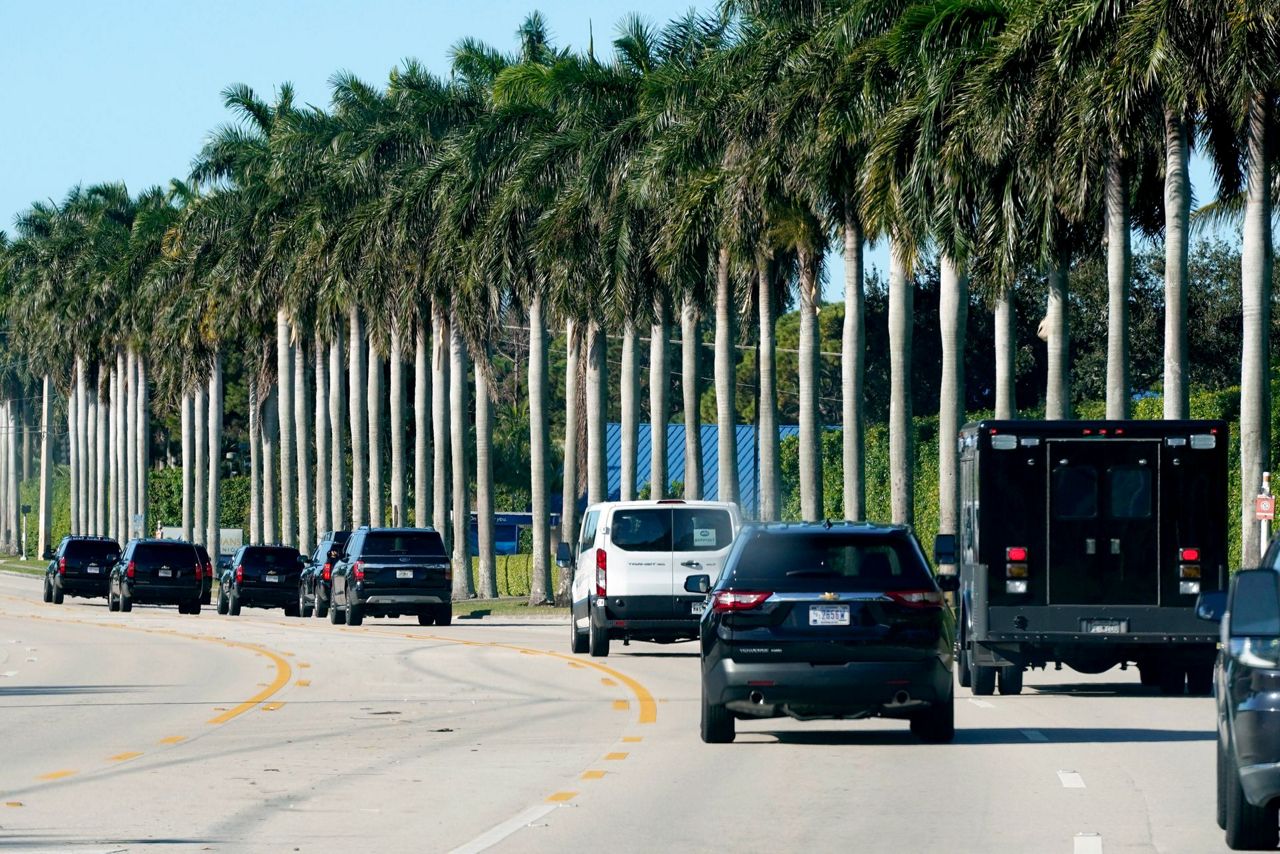 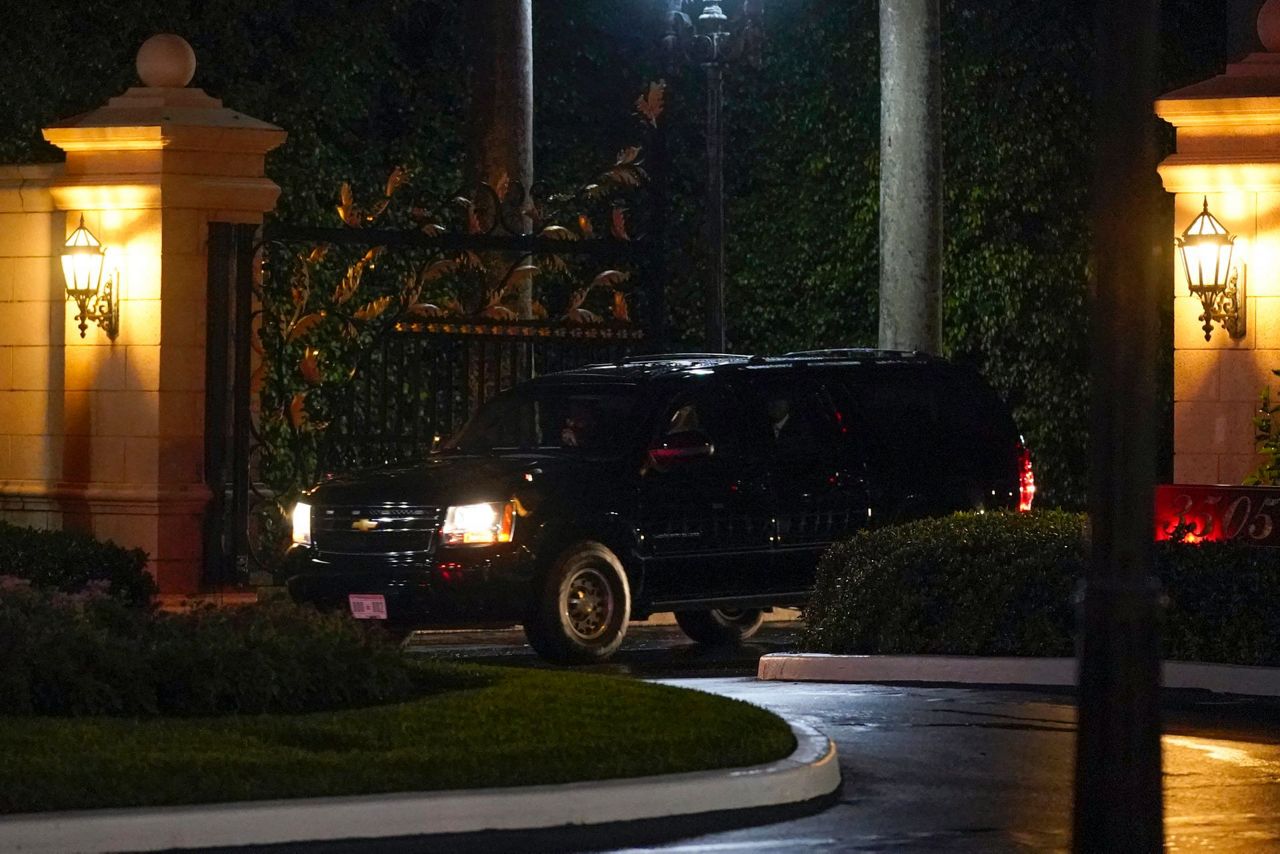 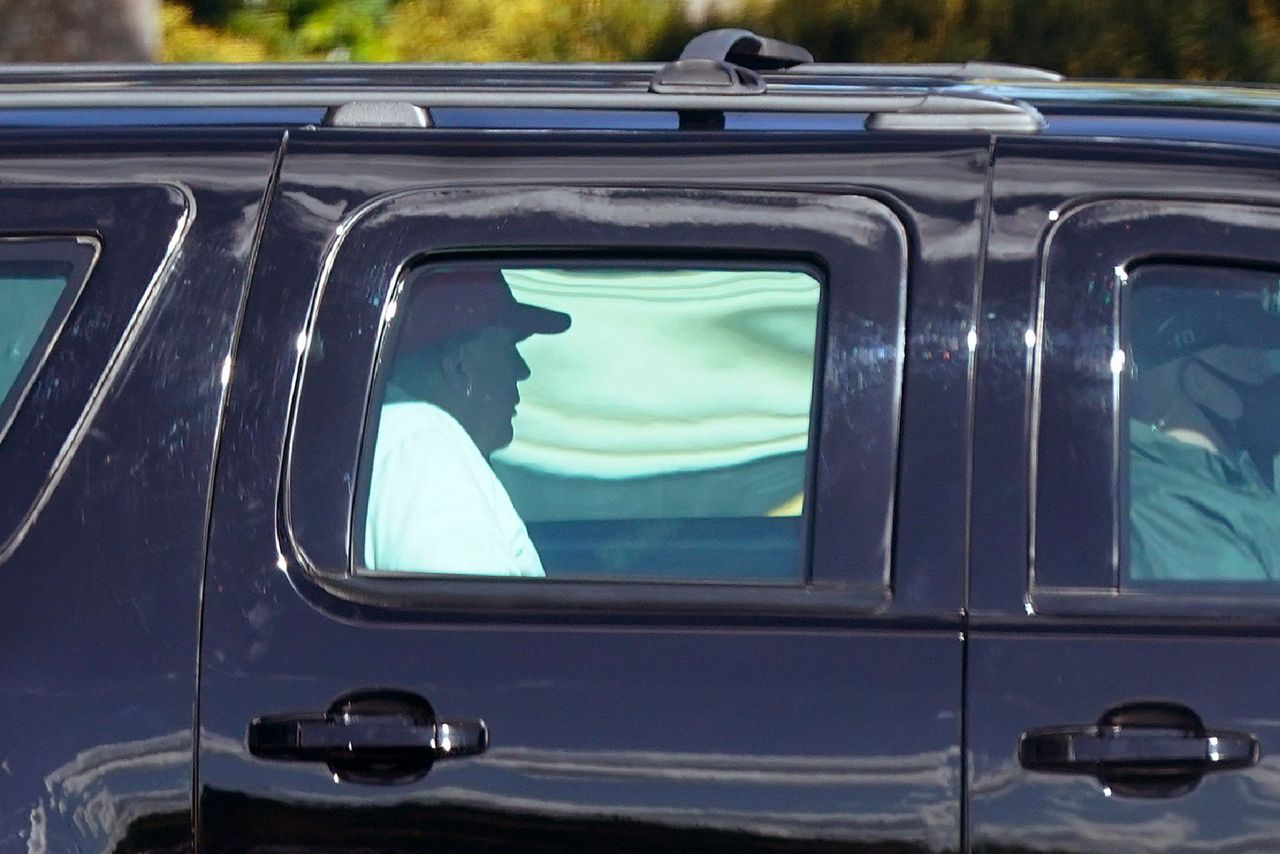 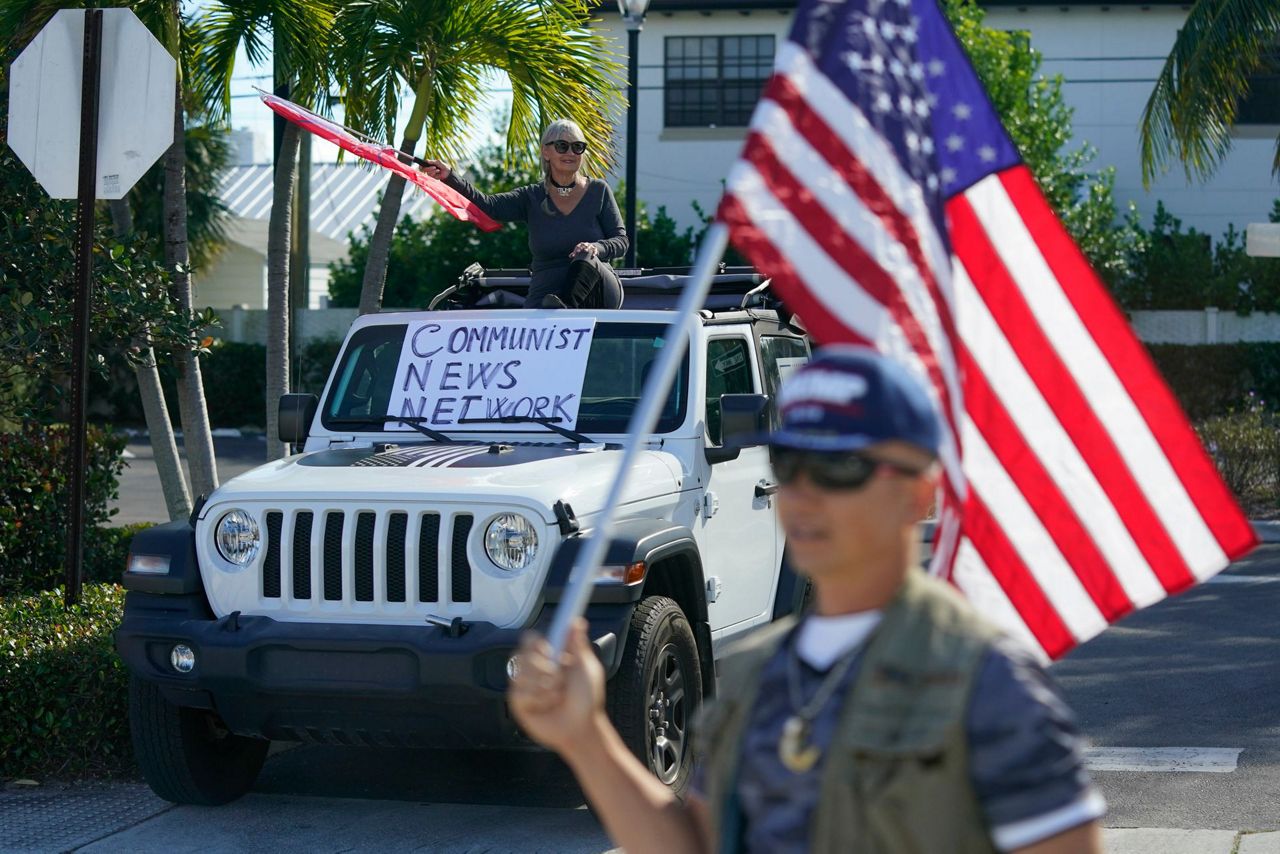 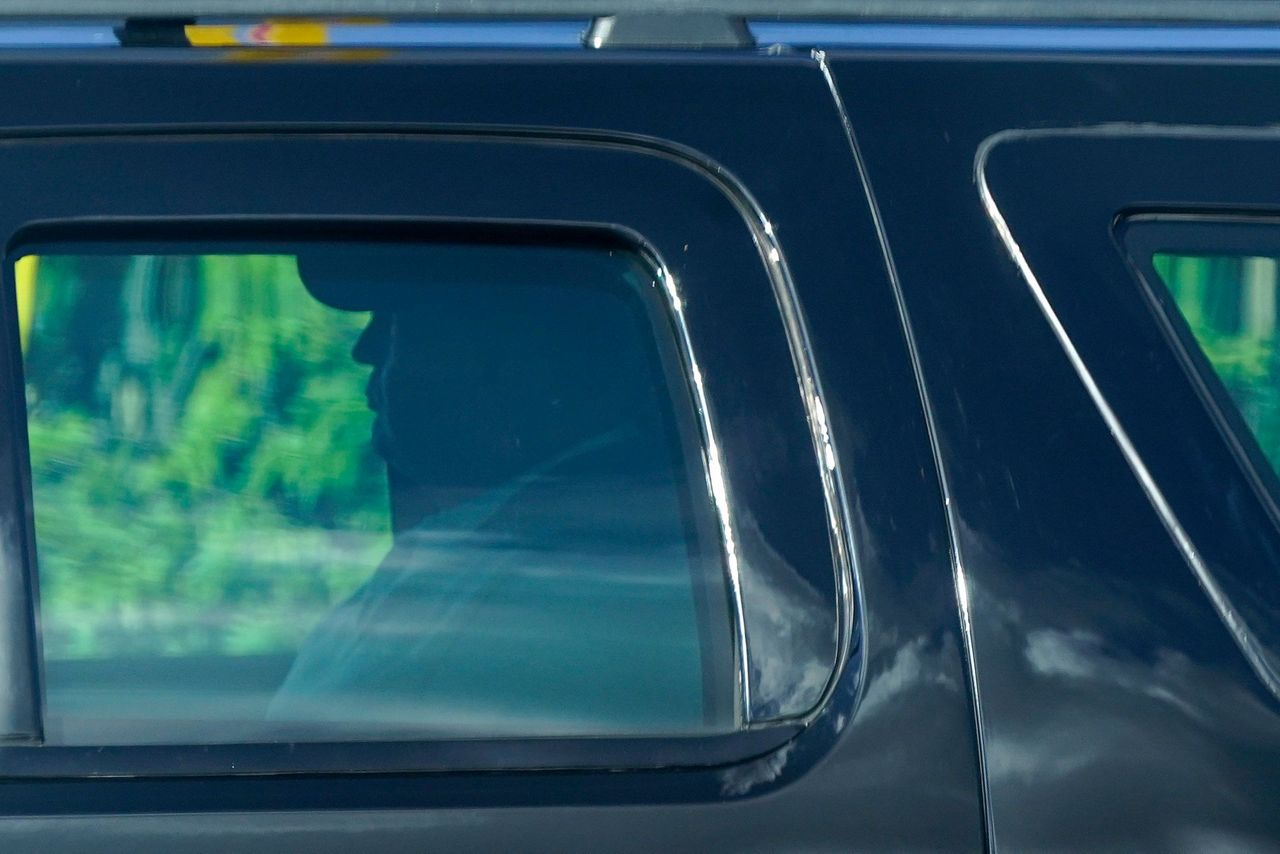 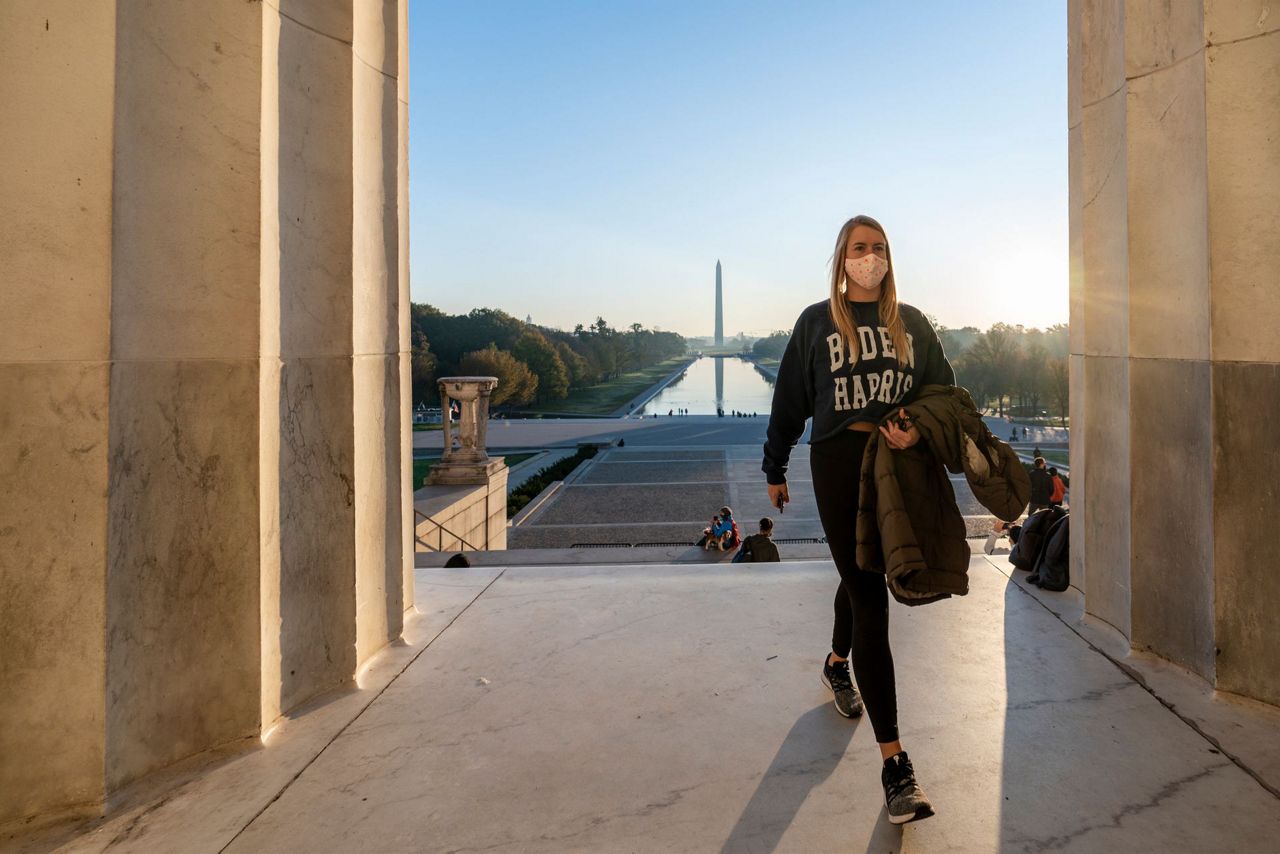 6 of 7
FILE - In this Nov. 8, 2020, file photo, a woman wears a Biden-Harris campaign shirt as she and others gather at the Lincoln Memorial at sunrise, Sunday, Nov. 8, 2020, the morning after incumbent President Donald Trump was defeated by his Democratic challenger President-elect Joe Biden. (AP Photo/J. Scott Applewhite, File) 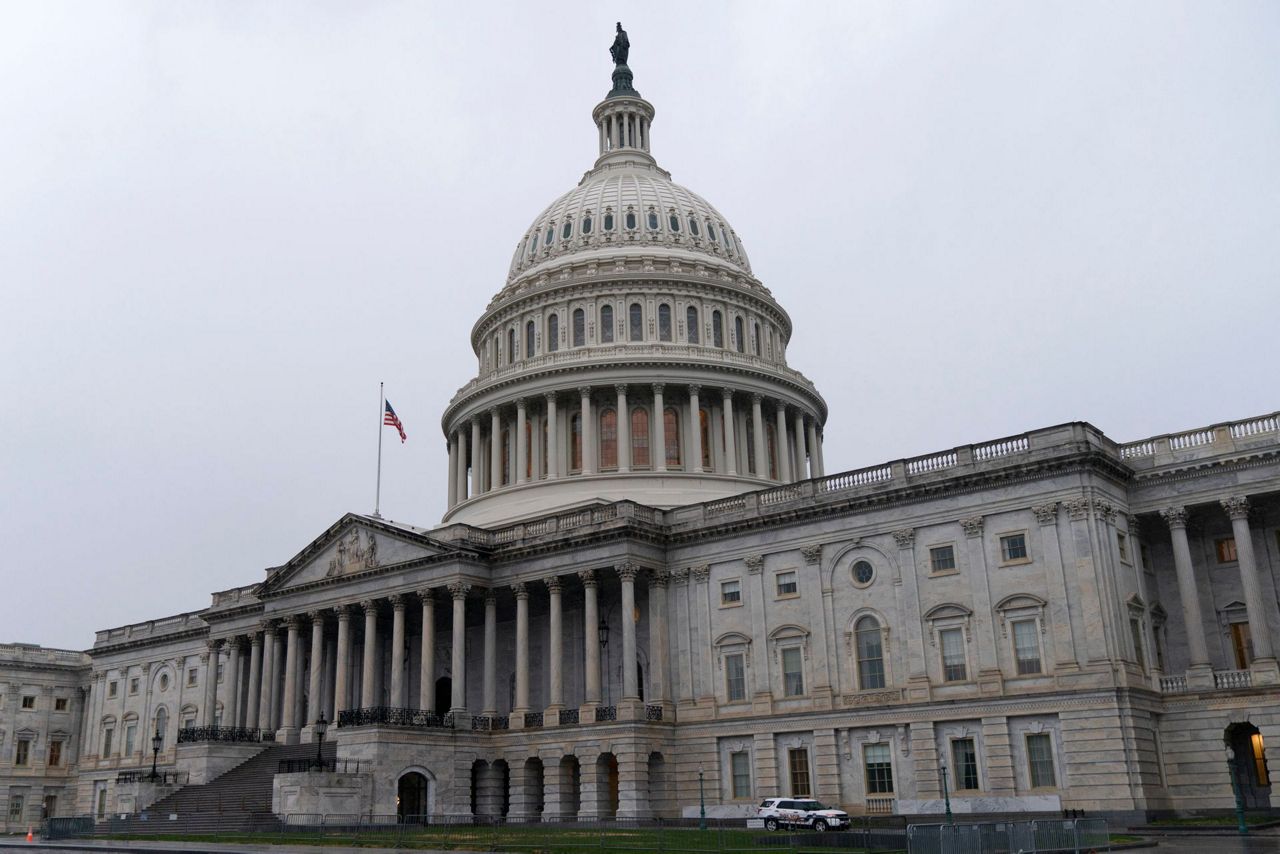 7 of 7
FILE- This Dec. 24, 2020, file photo shows the U.S. Capitol is seen in Washington. Unemployment insurance aid is expiring for millions on the weekend as President Donald Trump holds a pandemic relief package in limbo and gripes about “pork” in the bipartisan legislation passed by Congress. (AP Photo/Jacquelyn Martin, File)

The House gaveled in for the rare holiday week session to vote on Trump's unmet demand for larger $2,000 virus relief checks. Democrats who control the House favor the larger stipends, beyond the $600 payments included in the massive COVID bill. But the president's push for more spending is forcing his Republicans allies who oppose the higher payments into a tough spot.

The showdown offers more symbol than substance, and it’s not expected to alter the massive package, one of the largest federal interventions of its kind. Instead, the Trump administration now faces enormous pressure to quickly disperse the pandemic relief to Americans as the nation faces a bleak winter with COVID infections, and the virus death toll, surging.

The House chaplain opened in prayer for the lawmakers. “They return to the Capitol with a huge weight lifted from their shoulders, for which a nation is grateful, ” said Rev. Patrick Conroy.

Trump appears to have accomplished little, if anything, from the days of drama over his refusal to accept the sweeping bipartisan deal negotiated by his own administration.

The package the president signed into law late Sunday in Florida, where he is spending the holidays, includes two parts — $900 billion in COVID aid and $1.4 trillion to fund government agencies. It will deliver long-sought cash to businesses and individuals and avert a federal government shutdown that otherwise would have started Tuesday, in the midst of the public health crisis.

Aside from the direct $600 checks to most Americans, the COVID portion of the bill revives a weekly pandemic jobless benefit boost — this time $300, through March 14 — as well as a popular Paycheck Protection Program of grants to businesses to keep workers on payrolls. It extends eviction protections, adding a new rental assistance fund.

The COVID package draws and expands on an earlier effort from Washington, the largest of its kind. It offers billions of dollars for vaccine purchases and distribution, for virus contact tracing, public health departments, schools, universities, farmers, food pantry programs and other institutions and groups facing hardship in the pandemic.

Americans earning up to $75,000 will qualify for the direct $600 payments, which are phased out at higher income levels, and there's an additional $600 payment per dependent child.

Together with votes Monday and Tuesday to override Trump’s veto of a sweeping defense bill, the attempt to send much higher pandemic-era checks to people is perhaps the last standoff of the president’s final days in office as he imposes fresh demands and disputes the results of the presidential election. The new Congress is set to be sworn in Sunday.

House Speaker Nancy Pelosi, D-Calif., seized on the divide between the president and his party, urging Trump to put pressure on his Senate GOP allies to pass the bill.

“The President must immediately call on Congressional Republicans to end their obstruction and to join him and Democrats in support of our stand-alone legislation to increase direct payment checks to $2,000,” Pelosi said in a tweet.

The bill is expected to easily pass the House, but faces resistance Tuesday from the Republican-led Senate.

Trump's sudden decision to sign the bill came as he faced escalating criticism from lawmakers on all sides over his eleventh-hour demands. The bipartisan bill negotiated by Treasury Secretary Steven Mnuchin had already passed the House and Senate by wide margins. Lawmakers had thought they had Trump's blessing after months of negotiations with his administration.

The president's defiant refusal to act, publicized with a heated video he tweeted just before the Christmas holiday, sparked chaos, a lapse in unemployment benefits for millions and the threat of a government shutdown in the pandemic. It was another crisis of his own making, resolved when he ultimately signed the bill into law.

In his statement about the signing, Trump repeated his frustrations with the COVID-19 relief bill for providing only $600 checks to most Americans and complained about what he considered unnecessary spending, particularly on foreign aid — much of it proposed by his own budget.

While the president insisted he would send Congress “a redlined version” with spending items he wants removed, those are merely suggestions to Congress.

For now, the administration can only begin work sending out the $600 payments.

Democrats, who have the majority in the House, “will reject any rescissions” submitted by the president, said Rep. Nita Lowey of New York, chair of the Appropriations Committee.

A day after the signing, Trump was back at the golf course in Florida, where he is expected to move after President-elect Joe Biden is sworn in on January 20.

Republican Rep. Mo Brooks of Alabama, a conservative who supported Trump's extraordinary and futile challenge of the election results, counted himself Monday among the opponents of a more generous relief package and Trump's call for higher payments.

“It’s money we don’t have, we have to borrow to get and we can’t afford to pay back," he said on “Fox and Friends."

But Republican Rep. Elise Stefanik of New York said she was open to the idea of $2,000 checks. “Many Americans are in dire need of relief," she said on the show.

“The compromise bill is not perfect, but it will do an enormous amount of good for struggling Kentuckians and Americans across the country who need help now,” said Senate Majority Leader Mitch McConnell, R-Ky. “I thank the President for signing this relief into law."

Senate Democratic leader Chuck Schumer, D-N.Y., said he would offer Trump’s proposal for $2,000 checks for a vote in Senate — putting Republicans on the spot.

“The House will pass a bill to give Americans $2,000 checks," Schumer tweeted. “Then I will move to pass it in the Senate.” He said no Democrats will object. "Will Senate Republicans?”

Democrats are promising more aid to come once Biden takes office, but Republicans are signaling a wait-and-see approach.