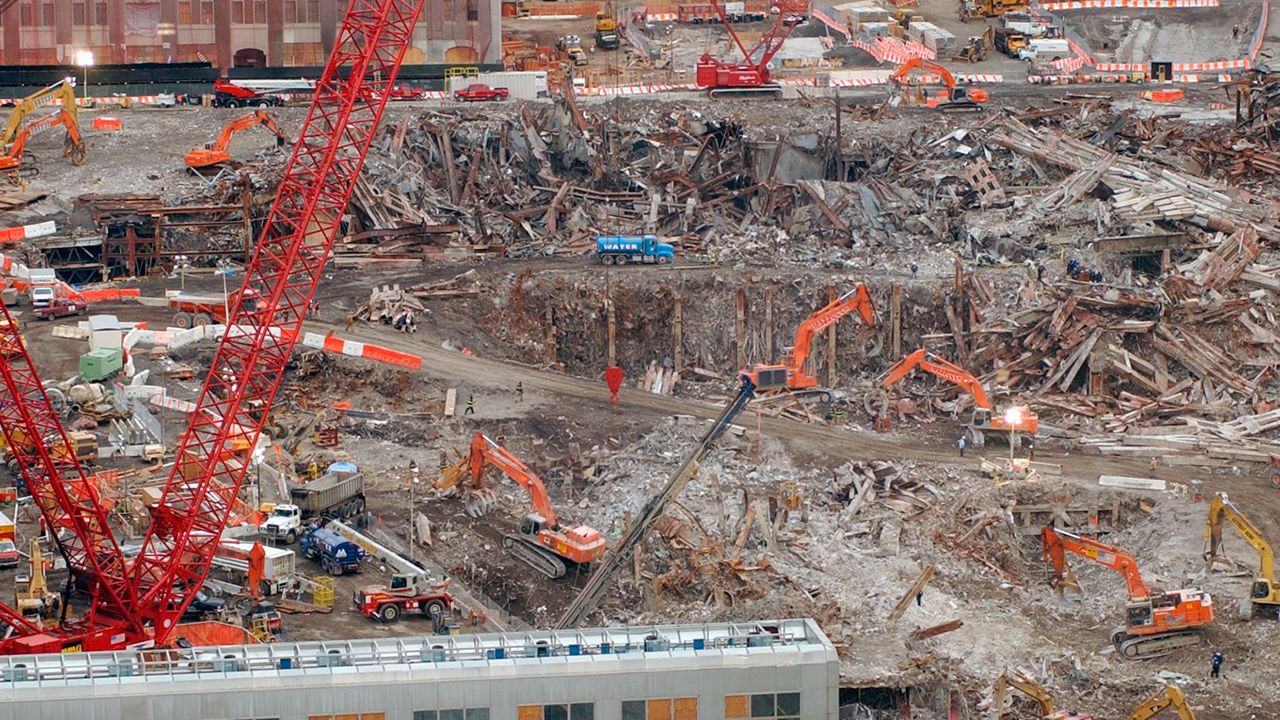 FILE - In this Friday Dec. 21, 2001, file photo, recovery and cleanup workers and their machinery continue to clear the site of the Sept. 11 attacks on New York's World Trade Center. In the foreground is a damaged pedestrian bridge. (AP Photo/Richard Drew, File)

In May of 2001, Reggie Hilaire was the pride of his family after graduating from the police academy.

Four months later, this rookie housing cop was plunged into the chaos of the terrorist attacks. He soon found himself guarding the rubble of the World Trade Center.

"I stood there for 12 hours. I remember someone clearly saying, ‘You should be wearing a mask.’ And I'm like, ‘All right, give it to me.’ I don't know. No one gave it to me." Hilaire explains.

Hilaire was also sent to the toxic landfill on Staten Island to sift through mountains of debris in search of human remains.

In all, he logged 850 hours of work, breathing in toxins day in and day out.

Four years later, he says he felt something unusual on his neck.

"My wife was pregnant with our son, and I remember we're in bed and she's holding me, and she goes, ‘What's this lump on your neck?’ I'm like, ‘I don't know.’ And I'm playing around. It's a big lump. So I'm moving around, like, ‘Hey, look it, look at this. This is pretty cool.’ And she's like, ‘No, you got to get that checked out.’"

After a successful surgery, there was more bad news to come: A biopsy of his bone marrow revealed multiple myeloma.

"Remember Charlie Brown, the teacher, when he called ‘bwah bwah bwah?’ That's all I heard. I didn't hear anything else. And I was like, ‘This, this can't be. How you mean cancer? I just got another one,’" Hilaire says, choked up with emotion.

Twenty years after the Twin Towers collapsed, 9/11 continues to haunt civilians and first responders who were in lower Manhattan in the months following the terrorist attacks.

According to the World Trade Center Health Program, some 111,000 people are enrolled. The vast majority of enrollees are men, at nearly 80%.

Patients struggle with a wide range of ailments, from respiratory illnesses to mental health issues, and  doctors have identified 15 different types of cancer in enrollees, with skin and prostate cancers topping the list.

Fire Lieutenant James McCarthy remembers it all too well.

McCarthy was on that smoldering pile for days and weeks on end, hoping to pull survivors from the rubble. Few wore masks.

"We were told that the air was safe." McCarthy explains. “So there was a confidence in what weren't experts, but just people that told us that it was OK."

But we now know that the air was not safe.

On Sept. 13, 2001, Christine Todd Whitman, the head of the Environmental Protection Agency, told the world that the air at the World Trade Center site was safe and was of "no concern."

"The concentrations are such that they don't pose a health hazard,” she also told journalists on the scene. “We're going to make sure everybody's safe."

Those words would come back to haunt Whitman for years to come. Her comments were the center of a 2007 congressional hearing about the toxic air at the site, where then-Rep. Anthony Weiner called Whitman's remarks "literally dead wrong."

The 2007 congressional hearing set the stage for many emotional battles to come on Capitol Hill.

"Less than 24 hours from now, I will be starting my 69th round of chemotherapy. Yeah, you heard that correct," Alvarez said at the hearing.

"I should not be here with you, but you made me come," he added.

Comedian Jon Stewart backed him up.

"They did their jobs. Courage, grace, tenacity, humility. Eighteen years later, do yours!" Stewart said.

Congress finally reauthorized the VCF, but the cost was high.

Alvarez succumbed to cancer just days after his emotional speech before Congress. He was 53.

The arm-wringing and begging that first responders went through still eats at firefighter Andrew Ansbro.

"Very disheartening to have to go there and do that, and basically walk the halls of Congress and, you know, hat in hands, telling people your story to get funding," he explains. "We ended up sitting with some, you know, 23-, 24-year-old intern here at taking our story."

Ansbro is now the president of the Uniformed Firefighters Association. But 20 years ago, he was a probationary firefighter with just seven months on the job. He knows far too many brothers who were lost forever.

There are 343 pictures on the memorial at the New York City Fire Museum. There is not a memorial here yet for the 254 firefighters who have succumbed to 9/11-related illnesses.

The fight for survivors’ benefits is not over. Attorneys are now pushing for Congress to authorize more funds for the World Trade Center Health Program.

Attorney Nick Papain has been litigating cases for 9/11-related illnesses for nearly 20 years.

"You have 110,000 first responders and civilians enrolled in the World Trade Center Health Program, and that number is only going to grow," he adds.

A new report released days before the 20th anniversary of the attacks finds that about 75% of FDNY first responders who toiled at the World Trade Center site are dealing with long-term illnesses.

Researchers with the FDNY explain that while cancer continues to take a toll on members of the FDNY, early detection and screenings are, in fact, saving lives.

"These men and women that ran into the towers, every one of them are heroes,” he says. “The World Trade Center, if it has taught us anything, it has taught us that we are one big community."

Lila Nordstrom has learned a great deal about the community of 9/11 survivors over the last two decades.

During her senior year, she was on the 10th floor of Stuyvesant High School and caught a glimpse of a low-flying plane from the window.

"It felt like an earthquake, and this whole neighborhood shook," she says.

Within minutes, Nordstrom found herself entangled with thousands of students and workers in lower Manhattan as they ran for cover.

"The moment I stepped outside, the second tower fell, and I ended up in a stampede of people who were all running uptown," Nordstrom says.

Nordstrom says her nightmare really began when students were ordered back to school on Oct. 9.

"The neighborhood wasn't open to the public." Nordstrom says. “We went through five police checkpoints on the way into school that day.”

"And it was very clear, I think, from the number of news crews that were called to report on our return, that part of our early return was about the symbolism of our return. It really wasn't about us," Nordstrom says.

She recalls being back in school.

"The first day, well, first of all, that day and every day after, by about noon, the whole building smelled like smoke,” Nordstrom says. "It smelled weird down there. The smell was really strong and really unusual and really dangerous smelling," Nordstrom says.

Nordstrom graduated from Stuyvesant High School and then college. She grew concerned, especially after it was confirmed that police officer James Zadroga died because of his exposure to toxins at the World Trade Center.

"They did not do any research on us. They did not track our health after these attacks. They do not know how many of us are sick. And I feel like in the absence of data, you cannot just rely on first responder data to say where we're going to get sick, because we have unique health needs," Nordstrom says.

So she took matters into her own hands and founded "Stuy Health" to try to do something.

She explains how it started a petition and then an email to her friends, who then shared it with others. She also used social media to reach students she had lost touch with or never even met.

"So while I would say that someone who is in their mid-to-late 30s should not know quite as many people who have had cancer in their age group, you know, should not have classmates that are entirely suffering from things like GERD and respiratory health issues and certainly PTSD," Nordstrom says.

Nordstrom hitched her wagon to first responders who walked the halls of Congress and made sure students were specifically named as protected in every piece of 9/11-related legislation at the federal level.

Her relentless work earned her a special medal from the mayor.

She says her work is not done, and will follow her for the rest of her life.

Nordstrom suffers from PTSD, GERD and other minor ailments, but she never knows when something more serious may creep into her life.

"I'm incredibly angry. I say it with a smile. No, I mean, I think that the fact that I was angry and that I was angry early is part of what motivated me to even get involved in this cause. Because I think I needed something to do with the anger. I think that it would have torn me apart if I had just sat on it. And so that is why I tried to kind of, you know, do something productive with it and make sure that it wasn't just for nothing," Nordstrom says.

Nordstrom documents her journey in her new book "Some Kids Left Behind." She hopes it will be a lasting legacy that the children who returned to school shortly after 9/11 will never be forgotten.\

Former Governor George Pataki shared something personal with NY1, which he says he has rarely talked about publicly.

"A few years after September 11th, I got sick," he says. "I had a very hard time breathing. So I went to a pulmonologist here at NYU, and I go in to see her, and she does an examination and she goes, ‘How long have you been smoking three packs of cigarettes a day?’ And I go, ‘I never smoked a cigarette in my life.’ And she goes, ‘Well, you have lungs that have serious issues.’"

Pataki was New York's governor on 9/11. Sometimes, he wore a mask. Other times, he did not.

The former governor says he is concerned by the divisive climate and the lack of unity.

"I look now 20 years later and it's the opposite. I've never seen America more divided in my lifetime. I’ve never seen us unable to talk to lifelong friends because they may have a different political philosophy," Pataki says. "And it's truly tragic because if we didn't learn it on September 11th, how are we ever going to learn that we’re all in this together?”