The challenges of treating roadways during winter weather

Winter weather can cause havoc on our roadways. Fortunately, road crews have a few tools at their disposal to combat the slick conditions.

Preparing roads for treacherous conditions is no easy task. Across the northern half of the country, state DOTs invest millions of dollars a year to achieve this.

North Carolina employs over 3,000 specially trained people to aid in the removal of snow and ice. Their winter fleet includes over 2,000 dump trucks fitted with plows and salt spreaders.

However, all of this muscle goes to waste without the right strategy.

Ahead of a winter weather event, officials can pretreat roads with a solution that helps lower the freezing point of the pavement. D.O.T. crews use a water and salt combo, also known as brine, for this purpose.

Those crews can apply the brine up to 48 hours in advance of an event, though every storm is different. For example, if rain is forecast to arrive before the snow and ice, the rain can wash away the brine, rendering its application useless.

States like North Carolina have storage facilities that can hold upwards of one million gallons of brine. Treating roads with brine is a much cheaper preventative measure than waiting until the snow begins to fall. 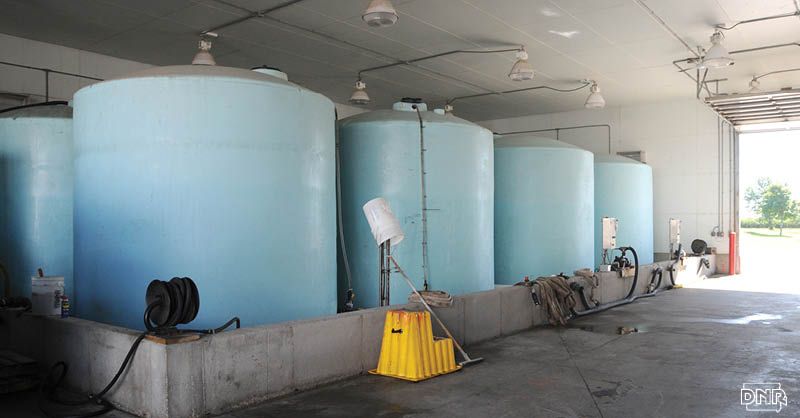 Brine tanks, like these, store millions of gallons of the saltwater solution. Image courtesy of Iowa's Dept. of Natural Resources.

The exact method used to treat roads, though, is typically determined by state and local officials.

In Columbia, Missouri, officials incorporate natural beet juice into their brine. They say the juice’s stickiness helps the brine better adhere to the pavement.

During and after the storm

The strategy for road crews changes once winter weather begins to fall from the sky. In addition to plowing, a process called deicing can help clear the pavement if snow and ice have already begun to accumulate on roadways.

Deicing involves spreading rock salt to breakdown the bond between the asphalt and ice.

Rock salt has its limits, however. Crews need to apply salt every couple of hours to avoid the formation of black ice.

It also becomes less effective at melting ice at colder temperatures. On top of that, the rate at which it can melt ice slows as the temperature drops.

With those pieces in mind, generally, salt will become ineffective once temperatures are below about 15-20 degrees Fahrenheit.

During extreme cold, sand is sometimes used in place of salt. Like salt, sand is relatively cheap, and D.O.T. crews can effectively spread it along the road to provide some additional traction. 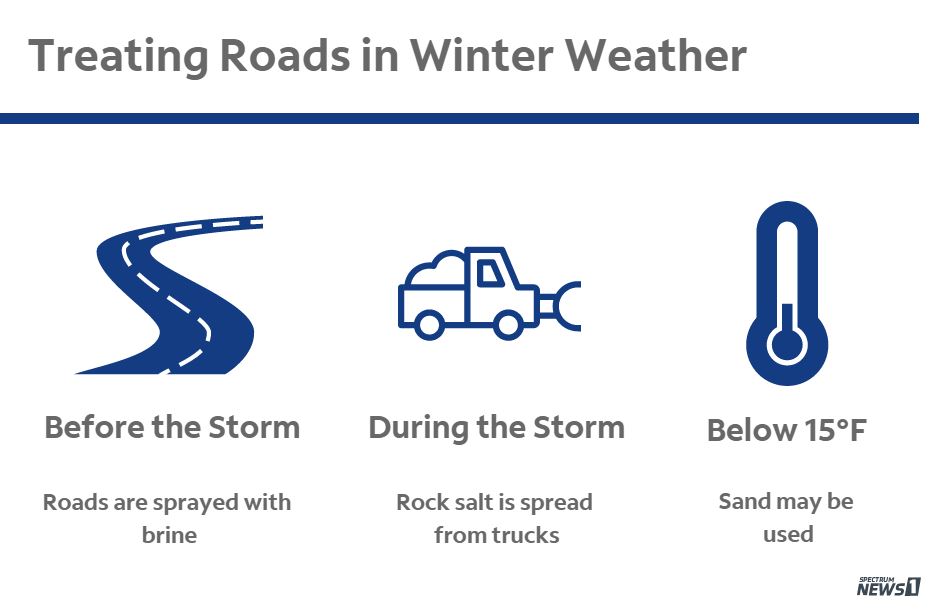 Referred to as RWIS, or road weather information systems, these stations provide insight into the conditions of the roads through meteorological data like pavement temperature and visibility. 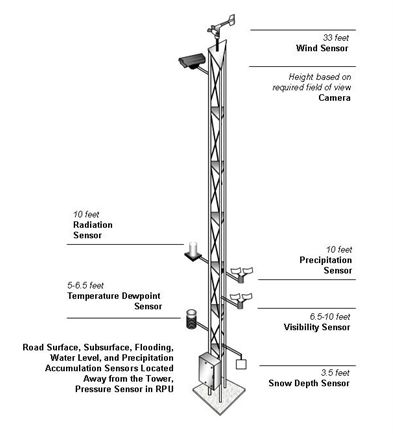 Diagram from the Federal Highway Administration.

Knowing the temperature of the asphalt is critical for transportation officials to determine the proper treatment method.

In addition, these weather stations oftentimes include a camera, allowing both the public and officials to quickly check road conditions.

Driving in winter weather can turn into a nightmare.

Here are a few safety tips to keep in mind: