New York state's unemployment rate is one-third of what it was compared to this time last year at 4.3%, but remains higher than the national average, according to unemployment data for September released by the state Department of Labor on Tuesday.

Each of the state's 62 counties reflect a lower number of unemployed people since last month. 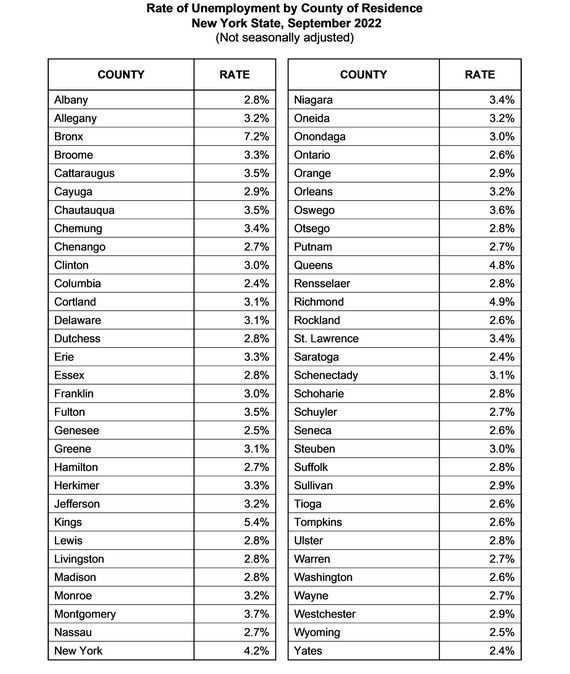 "The State Department of Labor released data today marking a significant milestone in New York's economic recovery: the unemployment rate has declined in every single county in the state compared to last year," Gov. Kathy Hochul said in a statement Tuesday. "New York's comeback is moving in the right direction."

Unemployment rates are calculated via U.S. Bureau of Labor Statistics formulas and the Current Population Survey based on 3,100 households across New York.

The governor noted how more than 980,000 New Yorkers were out of work two years ago in October 2020, or in the first year of the COVID-19 pandemic.

The most recent employment data is not seasonally adjusted and does not reflect seasonal employment. The year-over-year comparison is the most valid, according to the deaprtment.

"Climbing out of that economic hole has been difficult for families across New York, and there is more work to do," Hochul said. "That's why we're continuing to take meaningful action to revitalize our economy, create and retain good-paying jobs, and invest in the small businesses that are the lifeblood of our local communities. Too many New Yorkers are still feeling pain from the economic fallout of the pandemic and the rising cost of living. While the data released by the Department of Labor today is encouraging, we have more work to do to keep our economic comeback moving forward."

The state is accepting applications from small businesses for a tax credit to cover pandemic-related capital expenses.