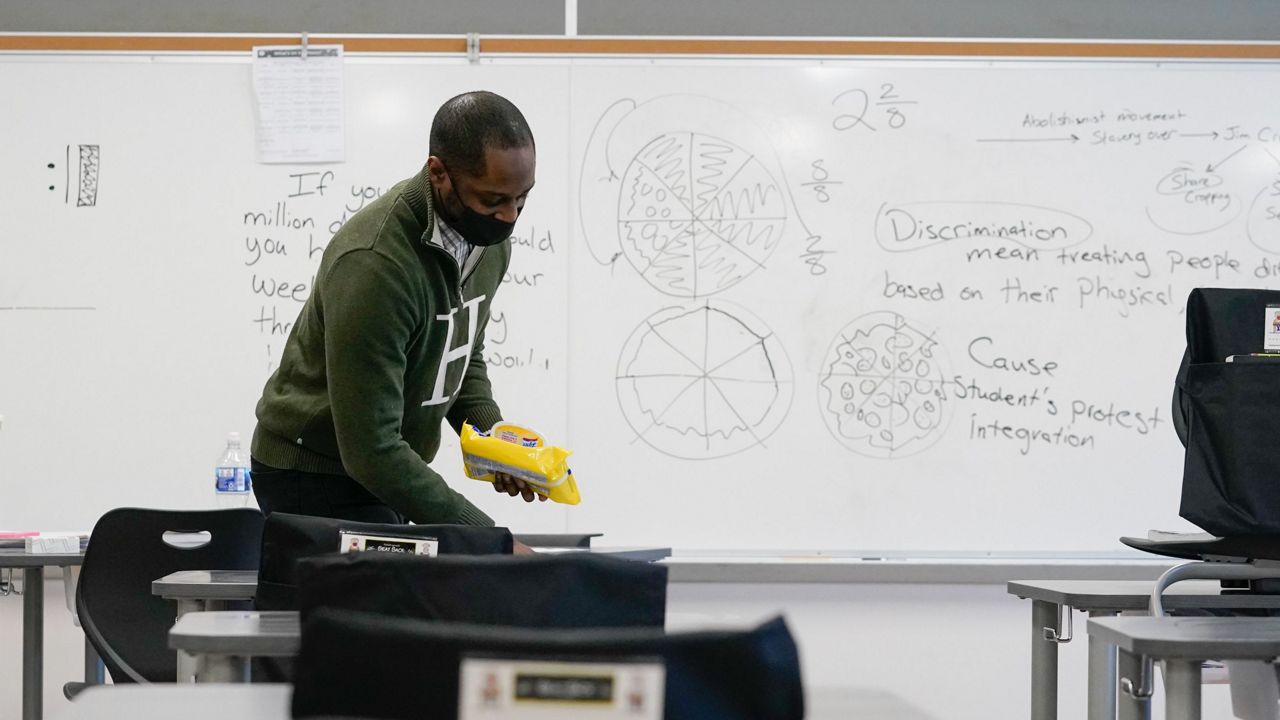 New York’s teacher shortage blamed on a variety of factors, including lack of respect, fewer benefits

School starts this week in New York and many districts have open teaching positions.

According to the New York State Council of School Superintendents, while five years ago there were shortages of teachers in certain specialized subject areas like physics, now poor, rural districts aren’t getting strong teacher candidates for any subjects.

There is also a lack of bilingual and special ed teachers, and a statewide problem finding enough bus drivers and substitute teachers.

According to Andy Pallotta, president of New York State United Teachers (NYSUT), far fewer people are entering the teaching profession in New York, something he blamed in part, on statements made in the past by former Gov. Andrew Cuomo.

“I think we had years where the narrative was negative,” Pallotta said. “You go back to the Cuomo administration where he would say ‘we are no. 1 in spending and no. 34 in results,' so right away you’re putting out a negative spin on educators, on schools. That’s over.”

While New York state still leads the nation in education spending, Pallotta believes that Gov. Kathy Hochul’s attitude toward education and educators has been more positive.

“This shortage started in 2008 with the recession and the budgetary issues that we had, and then in 2012 with new APPR (Annual Professional Performance Review). That combination of no money and severe regulations…we lost a generation of teachers,” Dr. Harper told Capital Tonight. “Now it peaks due to COVID, due to, are they being paid enough? Are the teachers getting respect? Look at the demands that are on teachers today.”

According to Kelly Zimmerman, superintendent of schools at the Delaware Academy Central School District at Delhi, new teachers have different expectations than they did 20 years ago.

“We are in a society right now where you look at the average tenure of any employee is about three years. We have a generation of people coming into the workplace who have the ability to be mobile and they were raised in an age where mobility is valued,” Zimmerman said. “That, and job satisfaction. We have teachers coming in and if they are not met with a certain degree of job satisfaction and/or support, that candidate will start to look elsewhere.”

Zimmerman also noted that even before the pandemic, there were increasing demands on teachers and fewer benefits.

“The fact that teachers now coming into in the system are coming into Tier 6 of the New York State Retirement System, which means that students coming now have to work 40 years, not 30 before they qualify for full retirement benefits,” Zimmerman noted.

Zimmerman’s district, Delaware Academy Central School District at Delhi, includes 800 students in the heart of the rural Catskills. It’s a geographically mid-sized district with about 46% economically disadvantaged students. She said that it’s been difficult filling positions.

“The candidate pool is more shallow than I’ve ever seen it in 24 years in this business,” Zimmerman told Capital Tonight. “The numbers and enrollment of students at teacher preparatory programs in the state are the lowest that they’ve ever been.”

Coming into the 2022-23 school year, Zimmerman’s district had 10 instructional openings, two secretarial openings and a vacancy for a teacher’s aide. Zimmerman said all the slots have been filled except for three.

“We are trying to look at creative ways to attract and retain teachers,” Zimmerman explained. “We have really embraced this issue starting with our Board of Education to the degree that they have included language in the mission of our district and in our district goals.”

One of Delaware Academy’s district goals includes the following: “Delaware Academy will support and cultivate an educational environment that prioritizes social emotional well-being of staff and students."

“We shifted gears a bit this year and moved to focus on the mental health of all of our faculty and staff,” said Zimmerman.

While among the poorest districts (70% economically disadvantaged) in New York, Salmon River boasts 1,450 students and the largest indigenous student population in the state. Additionally, 19% of Salmon River’s students come from Canada.

“We are truly an international school district,” said Harper.

The district currently has multiple instructional shortages in science, math, technology and music. Harper mentioned that some content areas are harder to recruit to rural districts.

“When you’re looking for a science teacher, a math teacher, a special education teacher, those are very hard to come by,” Dr. Harper said. “Oh, here’s an area that’s really tough across the board. It’s technology.”

The closest college preparatory program to Salmon River is SUNY Oswego, which is 3.5 hours away and only produces a handful of kids.

It’s so difficult for Salmon River to fill positions that Harper annually travels around the state to recruit candidates. He acknowledges that young people may not find the district attractive because there isn’t a lot to do in the area.

“All I saw in the last seen years was one college student with a physics/chemistry degree,” he recalled. “We were lucky, we just hired an individual with a physics and Earth Science certification. I don’t know how it happened, but it fell out of the sky.”

As a district, Salmon River has had to “up the game” in order to make hires.

“We had about 45 new hires this year, which is a lot especially for a school of this size. I had to start some of these teachers at a higher step,” he said. “Right now, it’s a market for the employee.”

At the same time, both Harper and Zimmerman told Capital Tonight they were cognizant that they couldn’t hire new teachers at salaries that vastly exceed the salaries of other teachers in the district.

Both also agreed that if teaching, as a profession, were to regain some of its luster, it would be easier to recruit.