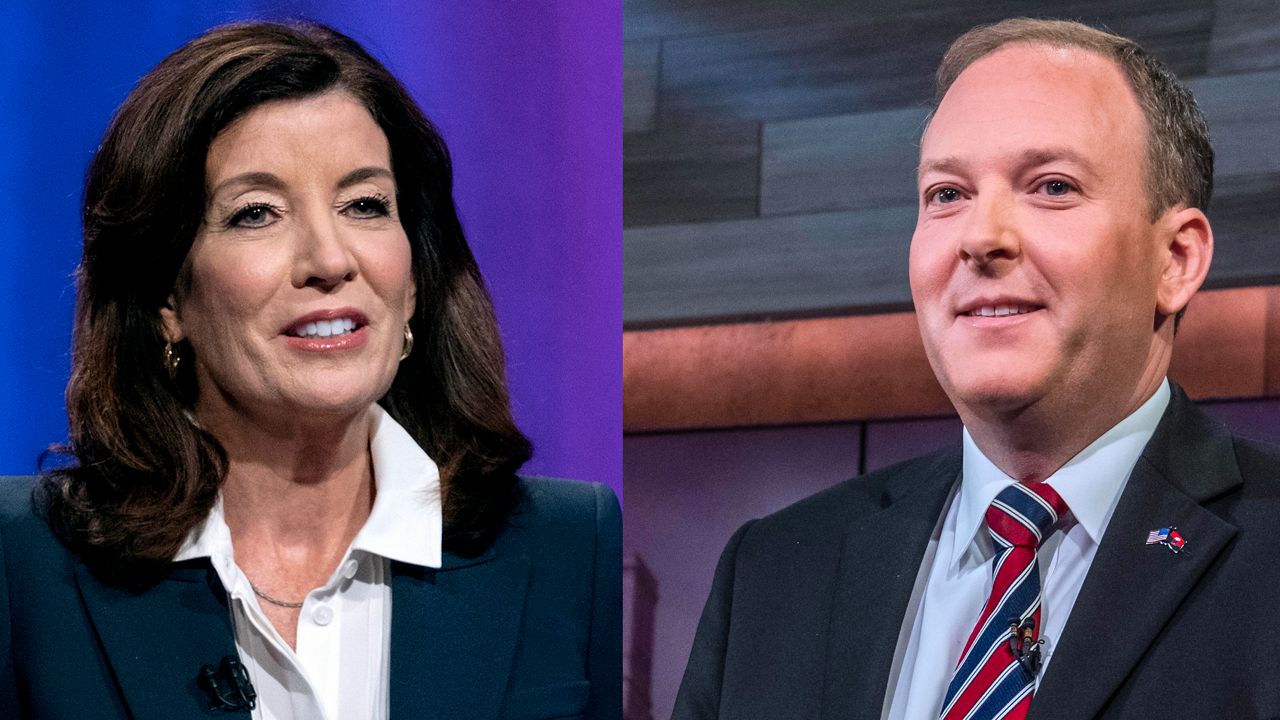 Hochul defends bail reform as Zeldin challenges her on crime

Gov. Kathy Hochul doubled down on bail reform Monday, saying there is no evidence it has contributed to rising crime rates.

Her remarks came on the day her Republican opponent, Long Island Rep. Lee Zeldin, said reforms to solitary confinement rules led to an increase in attacks on corrections officers.

Hochul was in Yonkers Monday for an official government event where she signed legislation. But during a question-and-answer session with reporters, she responded to new NYPD crime statistics that show the crime rate continues to move in the wrong direction.

“Have you studied what’s happening in other cities across the nation?” Hochul asked. “Doesn’t make people feel real comfortable, but when you compare the number of cases per 100,000 — whether its different categories of crime, violent crime, shootings, homicides — we are still lower than major big cities.”

Responding to NYPD statistics showing rising crime rates last month, @GovKathyHochul says there is no evidence it has anything to do with bail reform. Maintains that higher crime rates in New York are part of a “national trend.”

According to the NYPD, overall crime was up more than 30% in New York City last month compared to the same period last year. Grand larceny was up over 40%. Critics have blamed bail reform enacted by Democrats for contributing to the increase. But Hochul maintains one has nothing to do with the other.

“I will look at all the data,” Hochul says. “I’ve yet to see data that shows a correlation with a net increase in crime and the bail laws. Because it doesn’t exist in any other city.”

One of those critics, Zeldin, has zeroed in on both Hochul and legislative Democrats, blaming them for reforms he says have allowed criminals off the hook.

.@leezeldin continues to make crime one of his signature issues https://t.co/61Hm27H4ZW

At an event in upstate New York Monday, he also talked about rising assaults on corrections officers in state prisons.

Those attacks have risen 32% since a law limiting solitary confinement took effect April 1.

“Well, I believe the limit of 15 days is wrong. We are seeing the direct consequences of it. Our corrections officers are getting assaulted,” Zeldin said. “We are seeing an issue and I’m getting reports back from law enforcement — where people who got onto the force in a job that they love and they were thinking of making a career of it — are deciding now very early in their careers, ‘you know what? I’m just going to do something else.’”

Hochul left the door open to tweaking the bail reform laws at some point in the future, but lawmakers don’t return to Albany until January and the governor stopped short of making a firm commitment to make any changes.