Brian Higgins has developed a reputation on Capitol Hill on issues of immigration, trade, and tax policy. His voting record is consistent with the Democratic majority in the House and he has an above-average record for working with colleagues across the aisle. 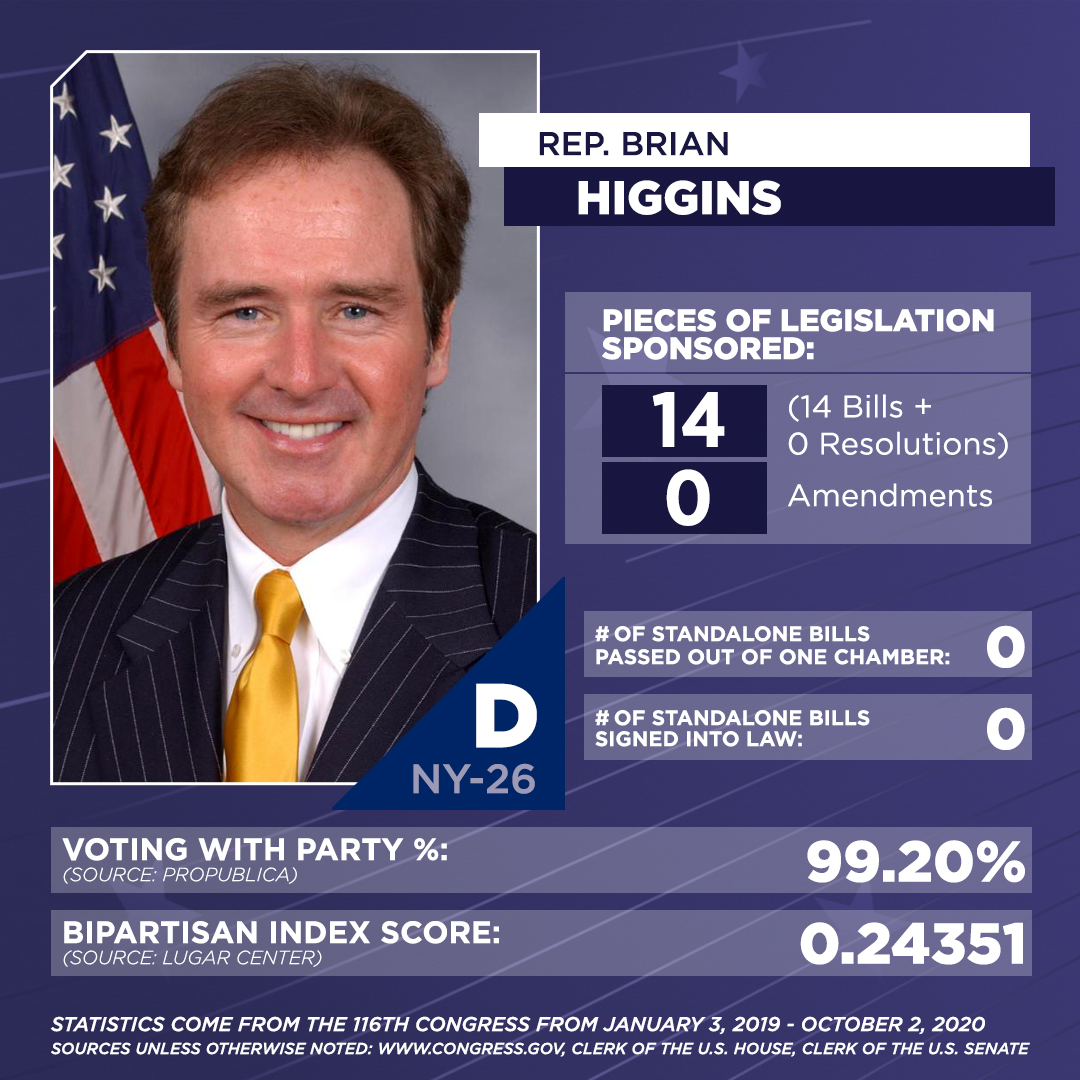 Leading on Legislation:  Congressman Brian Higgins uses his role in Congress to not just support legislation that is good for Western New York, but to find creative ways to author and advance policies specifically targeted to this community’s unique needs. Oftentimes that isn’t represented in stand-alone bills but through including text on issues important to the district in legislation already moving through the House.  Examples of such from the most recent session of Congress are below.

H.R. 4619, the Pharmaceutical Rebates for Excessive Pricing Above Inflation (REPAI) Act imposes a new inflation rebate for the thousands of drugs that older Americans rely on and access through Medicare Part D. If drug manufacturers raise these prices above the rate of inflation, they must either lower their prices or repay the increase above inflation to the United States Treasury.

H.R. 3341, the Opioid Treatment Providers Act, expands the definition for health professions opportunity grantees (HPOG) to include opioid treatment providers. The Buffalo and Erie County Workforce Investment Board already operates a successful HPOG program that has resulted in more than 1,500 individuals completing training, with over 1,200 entering employment in the health professions.

Highway Removal: Higgins fought to include language in the House Democrats’ infrastructure bill to ensure funding provided for bridge repair can be used for removal of structurally deficient bridges like the Buffalo Skyway. In the corresponding Committee report, he contributed language that supports removal of failing infrastructure to reconnect communities, such as the Kensington and Scajaquada Expressways.

Racial Health Disparities: The COVID-19 pandemic has laid bare and exacerbated many of our society’s underlying racial health disparities. Last year, Higgins wrote to the Director of the National Institutes of Health supporting efforts to address racial health disparities and seeking information on how community organizations can work with NIH to close the gaps. Following this outreach, Higgins brought together federal and local leadership from the National Institute on Minority Health and Health Disparities, the Health Equities Research Institute at the University at Buffalo and the African-American Health Disparities Task Force in Buffalo to discuss additional opportunities to collaborate. He continues his support for the National Institute on Minority Health and Health Disparities (NIMHD) to fund research into racial health inequities and successfully pushed for FY 21 report language supporting the NIMHD’s mission and urging more funding for community-based health disparities research like that taking place at the UB Community Health Equity Research Institute.

Signal Synchronization: After the successful deployment of signal synchronization in Pittsburgh through the SURTRAC program, which reduced emissions by 20% and wait times by 40%, Congressman Higgins advocated for the adaptation of a similar system in Buffalo as part of his vision to remove the Buffalo Skyway. The NYSDOT Skyway Scoping Document released in August incorporates this plan. Additionally Higgins authored language in the Transportation-HUD Appropriations Committee Report supporting the role of University Transportation Centers, like the Center at UB, in researching technology to reduce idling and congestion on urban arterials, such as signal synchronization.

Ability One: Higgins helped pass H.R. 4920, The Veterans Affairs Contracting Preference Consistency Act, which would preserve the AbilityOne Program. AbilityOne is a public-private organization that provides employment to more than 45,000 Americans with significant disabilities. Passage of H.R. 4920 saved the jobs of visually-impaired switchboard operators at the Buffalo VA Hospital.

Bipartisanship: Congressman Brian Higgins routinely works across the aisle on issues of mutual interest and regional significance.  As a member of the House of Representatives majority party it is reasonable that Congressman Higgins would support a majority of the legislation approved by the House this session but a full picture shows that Republicans also voted in favor of. In addition, there are at least 340 bipartisan bills that have passed the House of Representatives that are awaiting a vote in the Senate. Examples of Congressman Higgins’ bipartisan work during this session are below.

Cancer Research: Higgins, along with his bipartisan Cancer Caucus Co-Chairs, has led the effort to secure billions of dollars in federal investment for cancer research in the National Cancer Institute. Included in his advocacy for more federal funding, Higgins was also able to secure report language in the House FY21 appropriations that urges the FDA to provide guidance for immunotherapy-based combination clinical trials in order to help doctors better select optimal treatment options for their patients, as well as expedite regulatory review of novel regimens. This emphasis is especially relevant for researchers at Roswell Park and their Center for Immunotherapy which is doing cutting-edge research on the latest life-saving immunotherapies.

Great Lakes: Higgins, a member of the bipartisan Congressional Great Lakes Task Force, successfully pushed for a funding increase for the Great Lakes Restoration Initiative, a program responsible for several projects throughout WNY including the revitalization of the Buffalo River. Funding increased by $15 million, from $320 million in FY20 to $335 million to FY21. Higgins also authored language in the authorization bill Committee reports, documents that expand on the legislative intent of bills, urging a focus on the EPA’s “Areas of Concern,” with the goal of refocusing efforts on the Scajaquada/Niagara River Area of Concern. Additionally both the House and Senate versions of the Water Resources Development Act include language authorizing a harmful algal bloom demonstration program on the Great Lakes, which Higgins strongly advocated for based off of the initial success of the HABITATS pilot program in Lake Okeechobee, Florida. The Moving Forward Act would further increase GLRI funding to $2.125 billion over 5 years.

Northern Border: Rep. Higgins serves as co-chair of the bipartisan Northern Border Caucus alongside Rep. Elise Stefanik (R-NY-21) and has become the recognized national leader in the House of Representatives on northern border issues, owing to his focus on these issues because of the more than $1 billion impact that cross-border commerce has on Western New York. Early in the COVID-19 crisis, he successfully advocated for an exception for cross-border healthcare workers, and he continues to advocate for a measured, incremental loosening of COVID-19-related border restrictions, because of the economic and social harms that they cause.

EITC & CTC Lookback: The COVID-19 pandemic has disproportionately impacted lower-income families through unemployment and wage losses. Congressman Higgins introduced a bipartisan, bicameral bill with Rep. Kelly (R-PA), Senator Brown (D-OH) and Senator Cassidy (R-LA) to allow families claiming the Earned Income Tax Credit and Child Tax Credit on their 2020 taxes to use their 2019 wages to calculate the credits. This ensures families do not receive smaller credits next year due to lost income from the COVID-19 pandemic. The bill was included in the HEROES Act.

Aviation Safety: This year marks the 10 year anniversary of the Airline Safety and Federal Aviation Administration Extension Act of 2010, landmark bipartisan legislation that enacted several flight safety reforms fought for by Congressman Higgins, the Flight 3407 Families and the Western New York delegation after the tragedy of Colgan Air Flight 3407 in February 2009. These reforms include increasing first officer training requirements from 250 to 1,500 hours, stall recovery training, fatigue mitigation and expanded rest requirements, and consumer transparency measures mandating disclosure of the air carrier that operates each segment of the flight. The Pilot Records Database is the final remaining reform to be enacted from the 2010 law. In July, Congressman Higgins led a bipartisan WNY Delegation letter pushing the FAA to issue the final rule, as he has done several times since 2009.