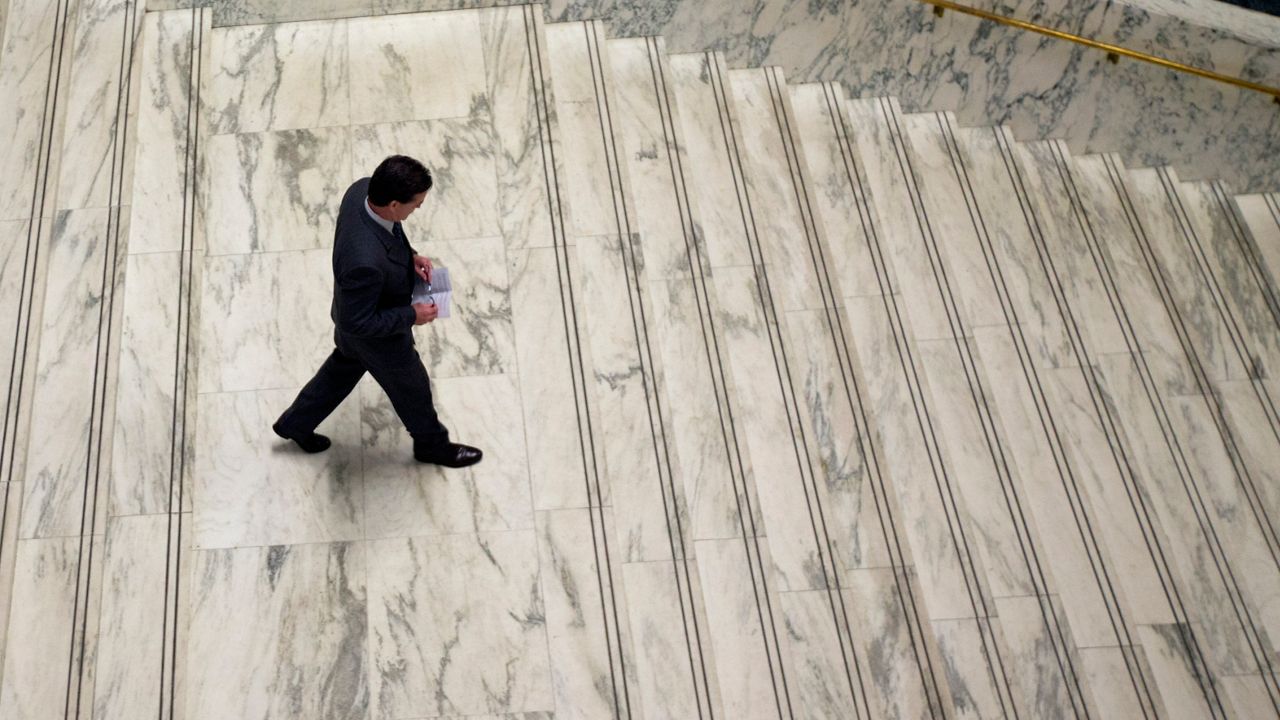 Senate Minority Leader John Flanagan, R-Smithtown, walks down a staircase at the Legislative Office Building in Albany in 2015.

Can State Senate Republicans Mount A Comeback in 2020?

For a little more than 10 minutes on Wednesday morning, Senate Minority Leader John Flanagan answered virtually the same, albeit differently worded, question over and over again from reporters: How can you retake the majority amid a wave of departures?

In the gaggle, Flanagan pointed to his time as a Republican member of the Assembly, where Democrats hold a virtually un-killable majority.

It’s going to be a steep hill to climb. The Republican conference of 2021 is guaranteed to look vastly different from the lawmakers who took office for the 2019-20 term. Already, eight lawmakers have either announced their plans to retire, have resigned, are planning to resign or running for Congress.

Flanagan believes Democratic overreach on issues like criminal justice law changes and taxes will help propel Republicans back to power.

“If you look at the left-wing of the Senate Democrats, they are under fire from people who are saying they’re not liberal enough,” Flanagan said. “It’s great folly and fanfare to go after the super rich, to say kill the rich.”

Republicans during the 2010s held power in the Senate with the aid of a breakaway faction of Democrats, the Independent Democratic Conference, which dissolved under increasing pressure from progressive groups.

Democrats regained the state Senate in 2018 amid a wave year for the party in New York and nationally.

In many respects, Republican hopes hinge on several factors that plagued the ill-fated Democratic majority of 2009-10: A deeply unpopular tax on the New York City suburbs, discord and dysfunction leading to a Republican wave year.

Those ingredients are not likely to be there in 2020. The $6.1 billion budget gap facing Albany is a clear problem, and Democrats are discussing whether to pursue broad-based tax hikes aimed at upper income earners.

President Donald Trump is expected to be at the top of the ticket again and is deeply unpopular statewide, but is supported in pockets of the state.

Still, Democrats hold a much larger majority in the current term than they did a decade ago. So far, the shenanigans that plagued Democrats in the previous majority have not returned and conference itself has largely turned over.

Just to reiterate: These are not the actions of elected officials confident they will retake the majority next year. Robach’s statement is an admission as such. https://t.co/HpbmdVH65P

Nevertheless, Democrats have been confident in their chances of not just holding the majority, but expanding it. And they’ve been practically giddy with the retirement news.

“Every day we see another Republican senator abandon the sinking ship and announce their retirement,” said Mike Murphy, a spokesman for the Senate Democrats. “Having no money, no candidates, and no ideas is a bad combination.”

On Monday, Senate Majority Leader Andrea Stewart-Cousins told reporters she expects her conference will grow from 40 members to at minimum 43 seats in the 63-member district. Democrats expect that same energy that created the wave in 2018 will be supercharged in 2020 for the presidential election.

“I think that speaks volumes,” Stewart-Cousins said on the Republican retirements. “I think we’re going to continue to have a Democratic majority in the state Senate and I also think it speaks to the environment for them nationally.”

New York Republican Chairman Nick Langworthy, like Flanagan, expects Republicans will be able to capitalize on the talk of taxes.

“They [Democrats] have a spending addiction,” he said this week during a news conference. “They’re going to come here with all sorts of ideas that’s going to bankrupt this state.”

But Langworthy noted, in part, the desire to not languish in the minority in Albany was understandable.

“You have members who are used to being the majority,” Langworthy said, “and driving the discussion.”