There are now 18,287 fewer active enrolled Republican voters in New York state in the three years since President Donald Trump was first elected, new voter enrollment statistics released by the Board of Elections show.

Democrats in New York continued to hold a wide advantage over Republicans, who are out of power in statewide office and in the minority in the Legislature, in active voter enrollment.

Democrats have added more than a quarter million enrolled active voters during that same time period — 273,684 voters, according to the new data. 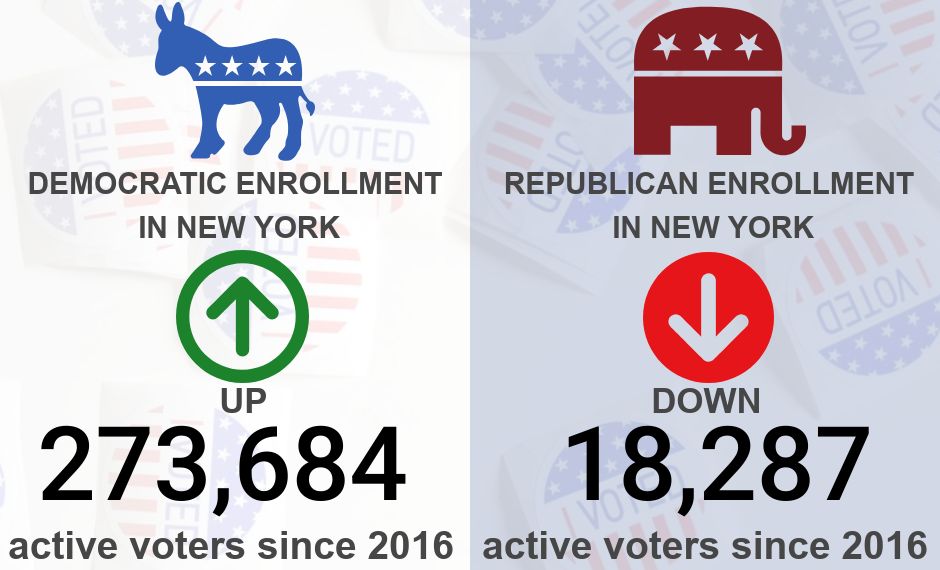 Democrats now have more than 5.9 million active voters in New York, easily eclipsing Republicans by a margin of more than 2 to 1.

In the rear view mirror for Republicans is the growing number of voters who have chosen to not enroll in party or “blanks.” Statistics show there are now more than 2.5 million voters who do not identify with a party, a gain of 62,639 voters over three years.

The ranks of the Conservative Party have also fallen in the last three years, declining by 4,224 active voters during the same time period.

Republicans have not won an election statewide since Governor George Pataki’s 2002 re-election to a third term. The state Senate in 2018 returned to Democratic control for the first time in a decade.

Nick Langworthy, who was formally elected Republican state chairman in July, has vowed to make enrollment a key priority for the party.