Fowl play: Why researchers in CNY are changing the sex of chicks before hatching

You might not know which came first, but when it comes to chickens, it's a female-dominated world where the males just aren't that useful.

Sure, a few are needed to fertilize new eggs, but the majority - an estimated 7 billion worldwide - are culled.

So, what if you could change the sex of an egg before it hatches, giving you more hens? That would be something to crow about. 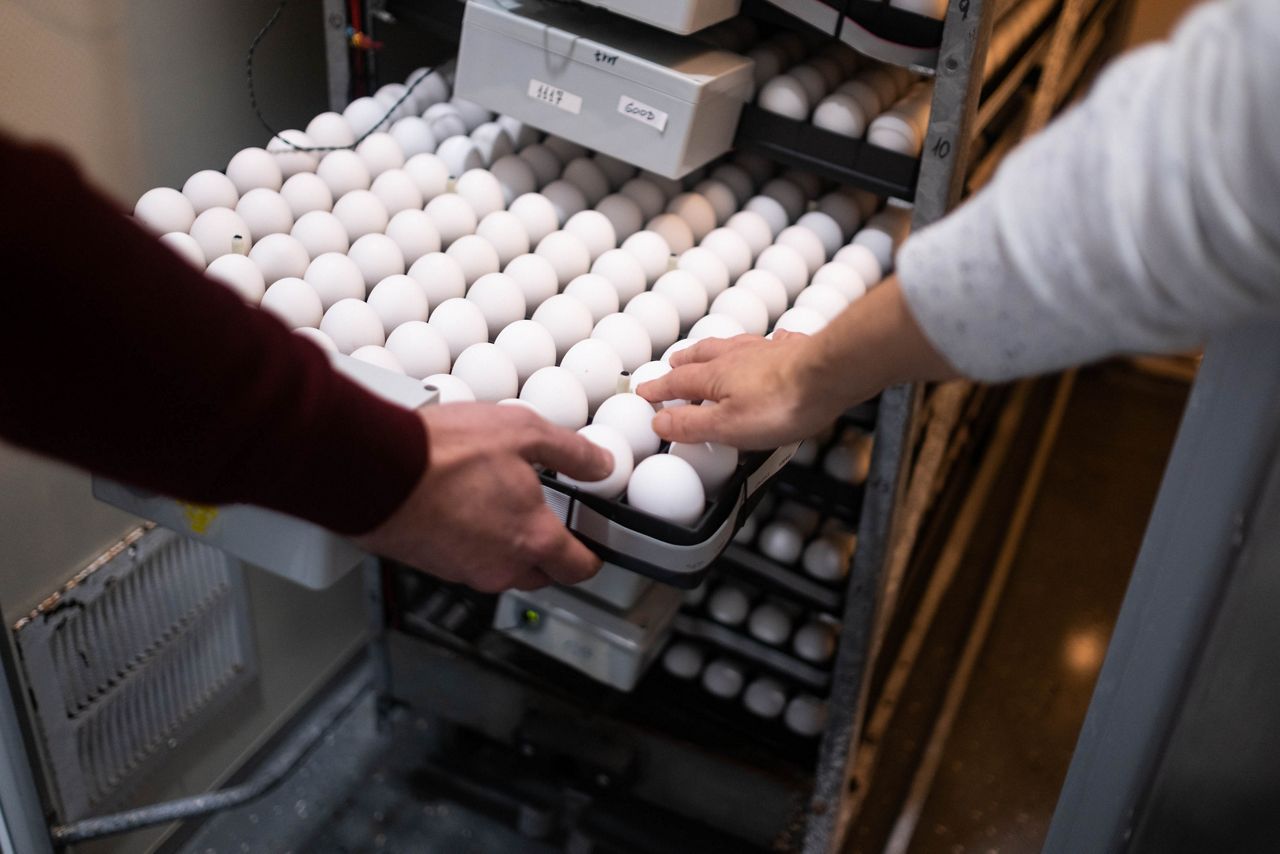 The incubator technology that Soos has developed. (Emily Kenny/Spectrum News 1)

After pitching its research in the Grow-NY competition in 2020, Israeli company Soos is researching methods to bring the chances of a hen from 50% to near 100% in order to end male-chick extermination in egg production using controlled environmental factors and sound vibrations at a poultry farm near Auburn.

The elimination of culling male chicks would increase animal well-being and make the industry more sustainable as it would mean there would be more laying hens. The startup won a $1 million award from Grow-NY, which stipulates award winners invest in the CNY economy by generating jobs or opening a facility in the region. So far Soos has created seven positions and helped the farm, Finger Lakes Pullets, maintain 13 jobs on his farm.

Soos also has partnered with Syracuse University to do research in a laboratory on campus. 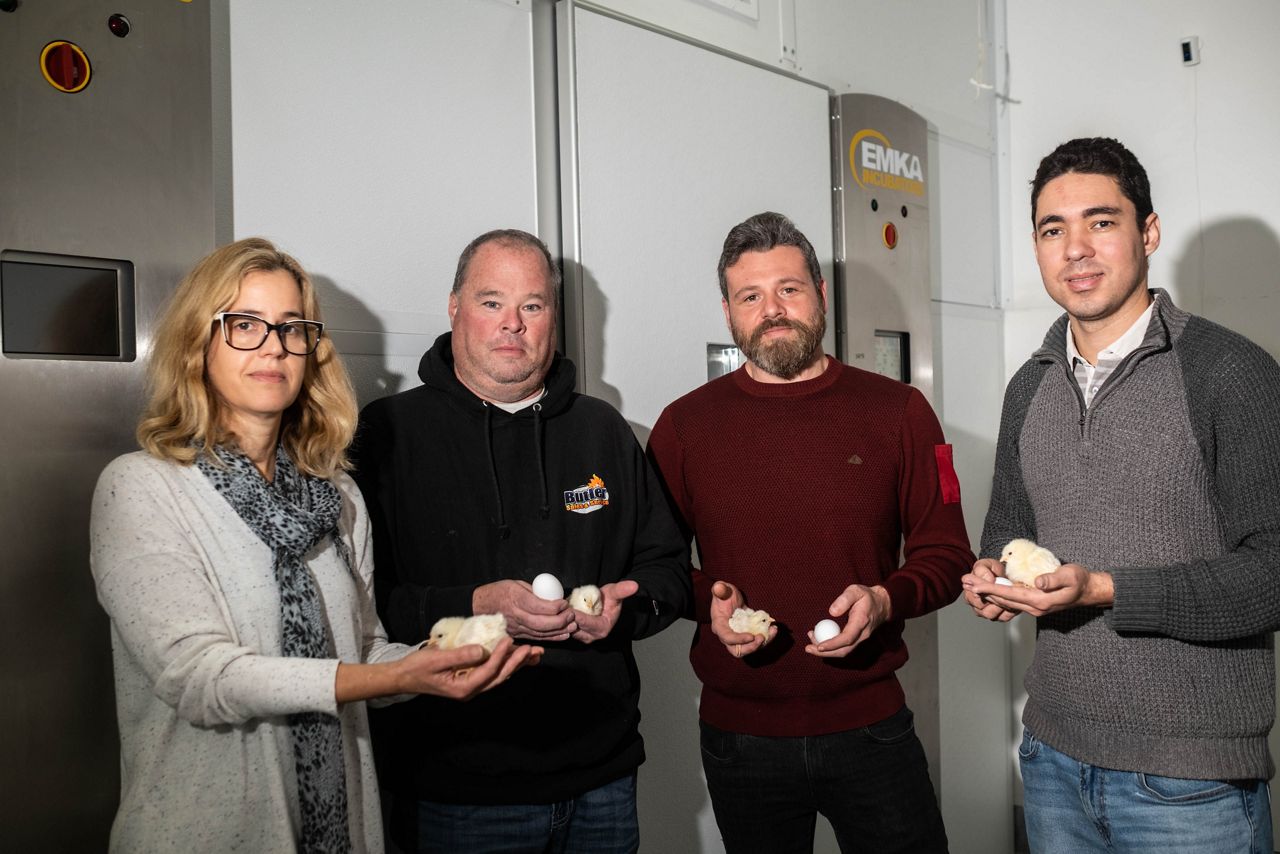 “This is something revolutionary if you start doing the numbers, you’re talking billions of chickens that are going to be saved,” said Michael Butler, a co-owner of the Auburn farm.

Butler said male chicks are culled because they do not produce meat or eggs.

“They don’t lay [eggs] and they can’t be used in the meat industry, they don’t get fat as much as females,” he said. “The cost to feed these animals and the time it takes to get them to a desired slaughter rate, it’s just not viable financially.” 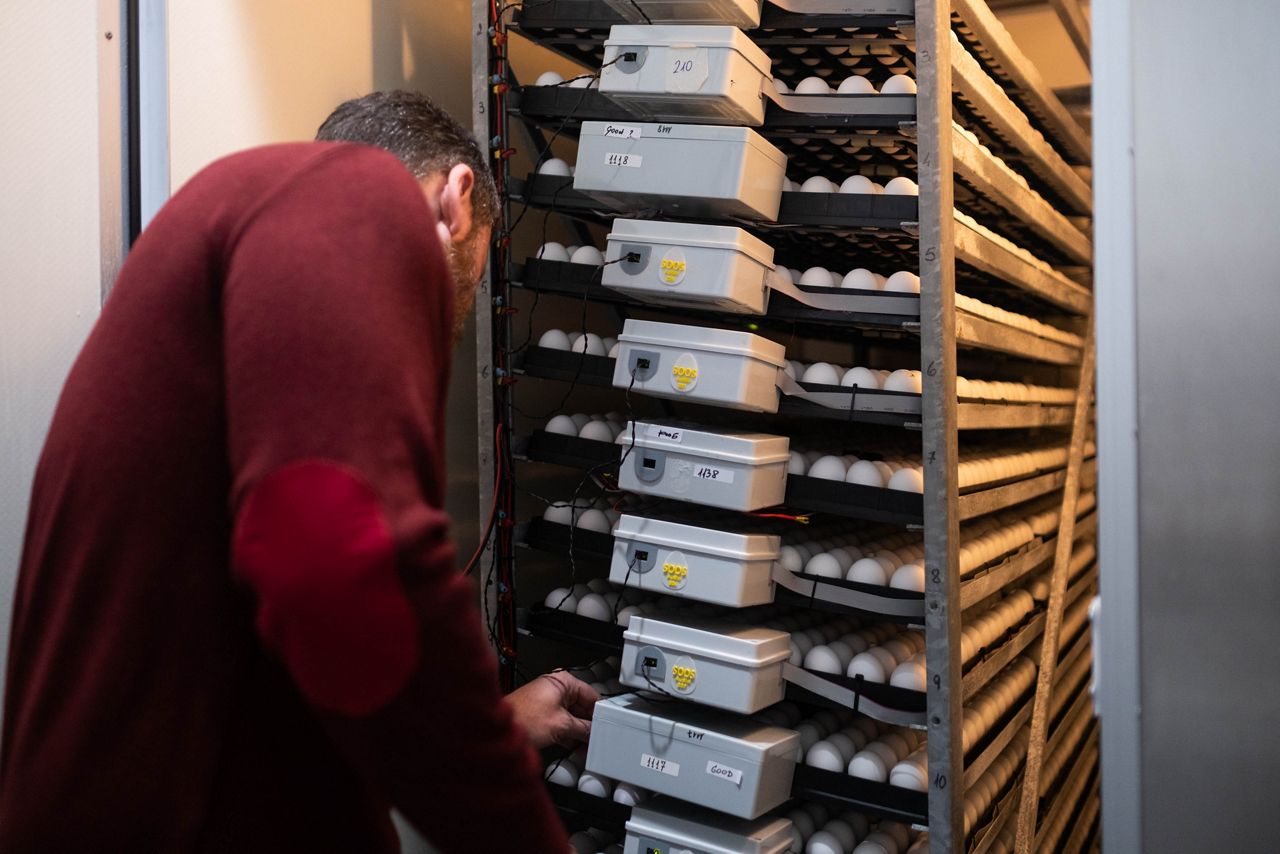 Elly Korzon, a technician for Soos, pulls out a tray of eggs. (Emily Kenny/Spectrum News 1)

To make the process more financially solvent, Soos is researching an incubation platform that impacts the eggs’ development process and pushes them to develop female rather than male. They control environmental factors in the incubator such as humidity and temperature, and additionally, they expose the eggs to sound vibrations.

The goal is to have their eggs develop only as female and not male, eliminating the problem of culling the male chicks.

According to the USDA, the average price of a dozen eggs is $3.69, up from $1.02 per dozen a year ago. The price increase comes from the high levels of avian influenza, which has caused the death of 52.48 million birds in the U.S. this year. 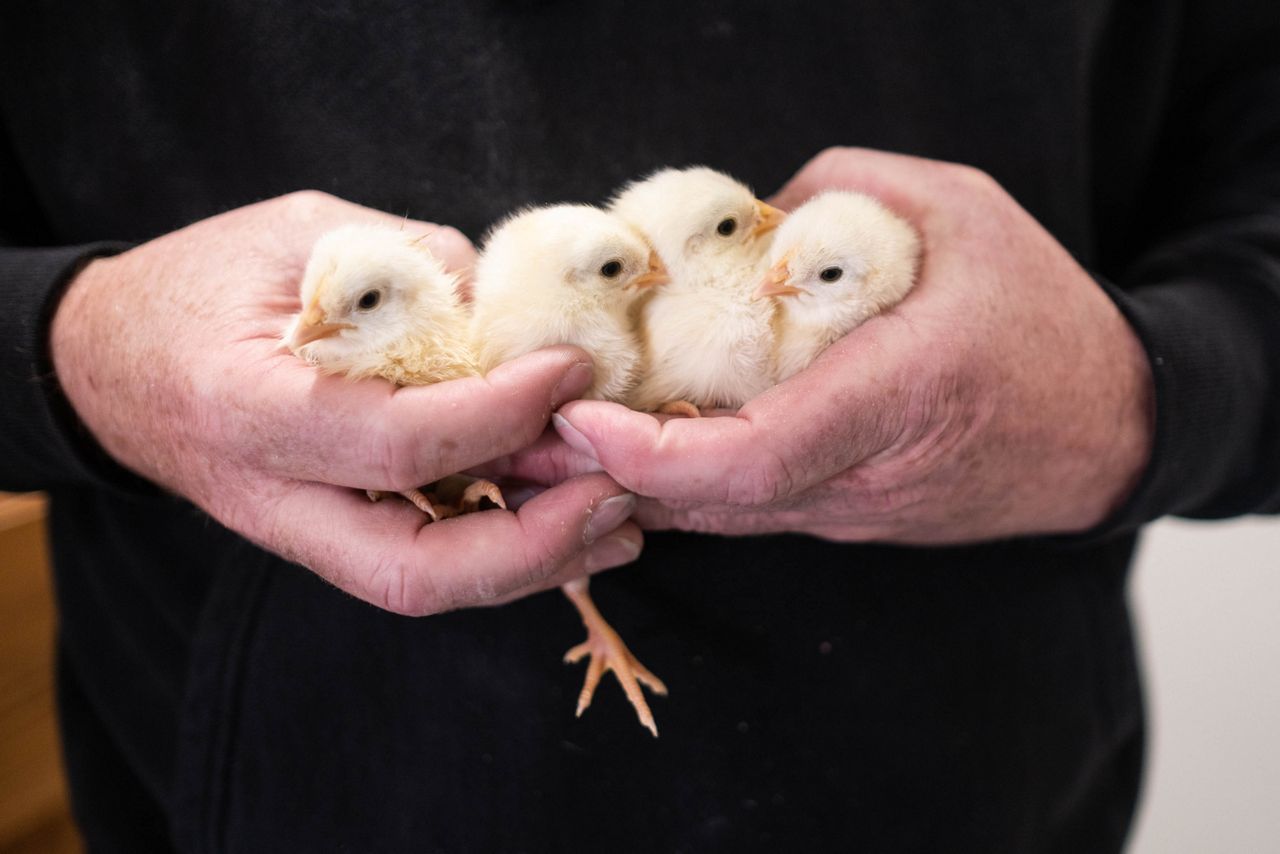 Efrat Petel, general manager of Soos USA, said that avian influenza is causing an egg shortage and the higher prices.

“It’s started already, and this technology will help prevent it. This is the biggest challenge of the egg industry,” said Petel. "The industry is looking for a solution. Our technology doesn't interfere with the way the industry is working and doesn't use GMOs. We are pushing the males to develop as functional females by mimicking nature and controlling the environment." 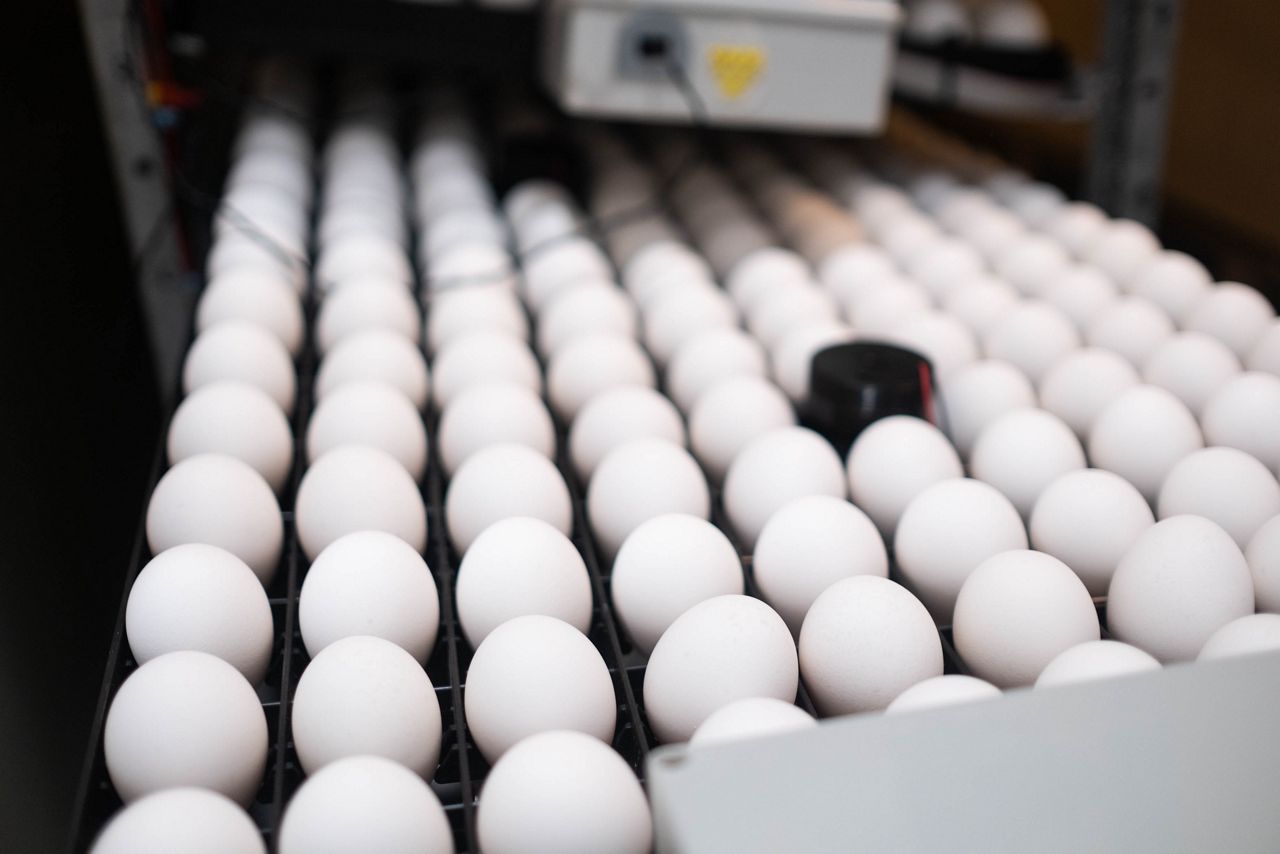 Eggs sit in the incubator that Soos has developed. (Emily Kenny/Spectrum News 1)

Naturally, the number of females and males born is about 50% each, but with their technique, Soos so far has been able to get that to 65% females born. Their goal is to make it close to 100% female.

With more data collection their hope is researchers will determine what exactly changes the embryos from male to female. They have some ideas but are still working out specifics.

“In the first few days, the cells start expressing genes that determine if they will develop as male or female,” said Ciro Cordeiro, a scientist for Soos. “The idea is that we could affect this process, we don’t know exactly what genes are affected but this is what the research is aiming to find.”