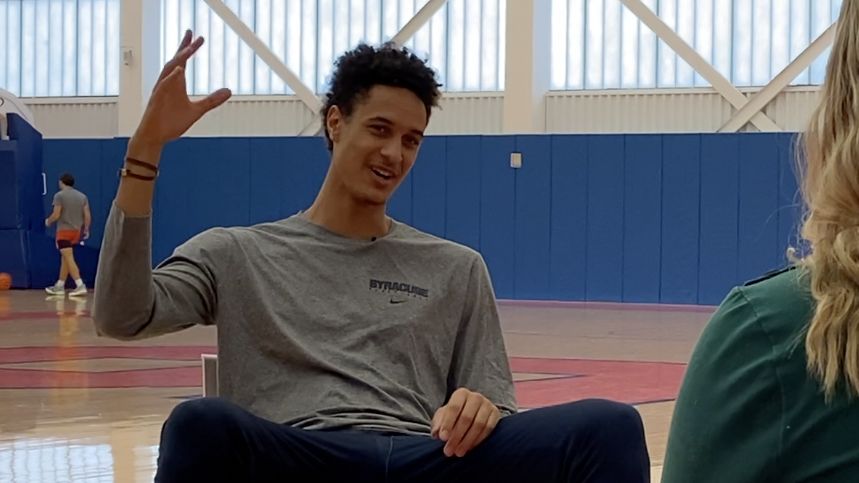 Syracuse University was rolling to their fourth straight win at Boston College on Feb. 8, 2022, when it lost their star center for the rest of the season.

“It really hurt, not just the hand," Jesse Edwards said. "It really was a tough moment because like you said, everyone was in a good flow."

It was a fractured wrist for Edwards, who was a candidate for the ACC’s Most Improved Player of the Year award. He was playing over 27 minutes, averaging 12 points, six and a half rebounds and nearly three blocks per game.


“The positive I got out of it was all the support from the fans and from the team. Made me really feel even more at home here," Edwards said.

The native of Amsterdam was cleared for basketball activities in June and hit the world stage over the summer, playing for the Netherlands in the FIBA World Cup Qualifiers and in EuroBasket.

“I picked up a lot of things I think I’ll be able to take for the rest of my career," Edwards said.

In EuroBasket, he played against some of the best players in the world, including Nikola Jokic.

“It was funny, the first play was me. I boxed him out on offense. I got an offensive rebound and finished at the rim. I was like, 'woah, that was something,'" Edwards said.

He took a lot from the experience of competing against NBA stars.

“You see the dynamic of how it is to lead, and how it is to impact your team from different positions," Edwards said.

In the center position, he was the Netherlands leading rebounder and shot-blocker in the team’s five games.

He’s back to 100%, looking to bounce back and make his final college season one to remember.