Photo essay: How sunflower seed oil is made

Making scenic backdrops for summer, sunflower farms throughout upstate New York have brought hundreds of onlookers, but unlike their crop counterparts – apples, pumpkins and blueberries – few are full pick-your-own operations. 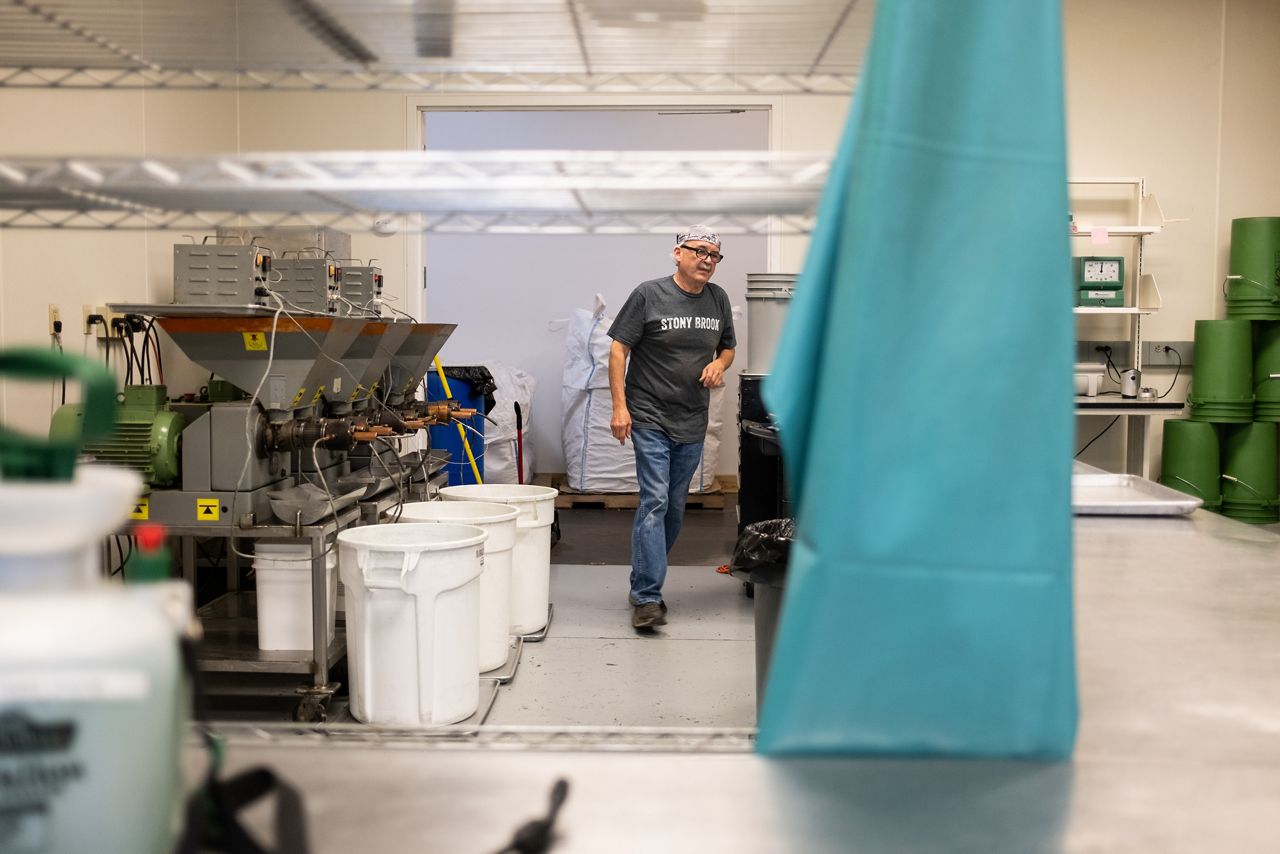 Instead, farmers have found value harvesting the seeds once the sunflowers die in the fall and send them off to produce everything from sunflower butter (a peanut-free alternative for lunchtime) and sunflower oil, which contains half the saturated fat as the more popular olive oil.

The National Sunflower Association notes sunflower oil is noted by chefs for its light taste and frying performance.

But what does it take for the photogenic flower to turn to oil? We visited Stony Brook Wholehearted Foods in Geneva to find out. 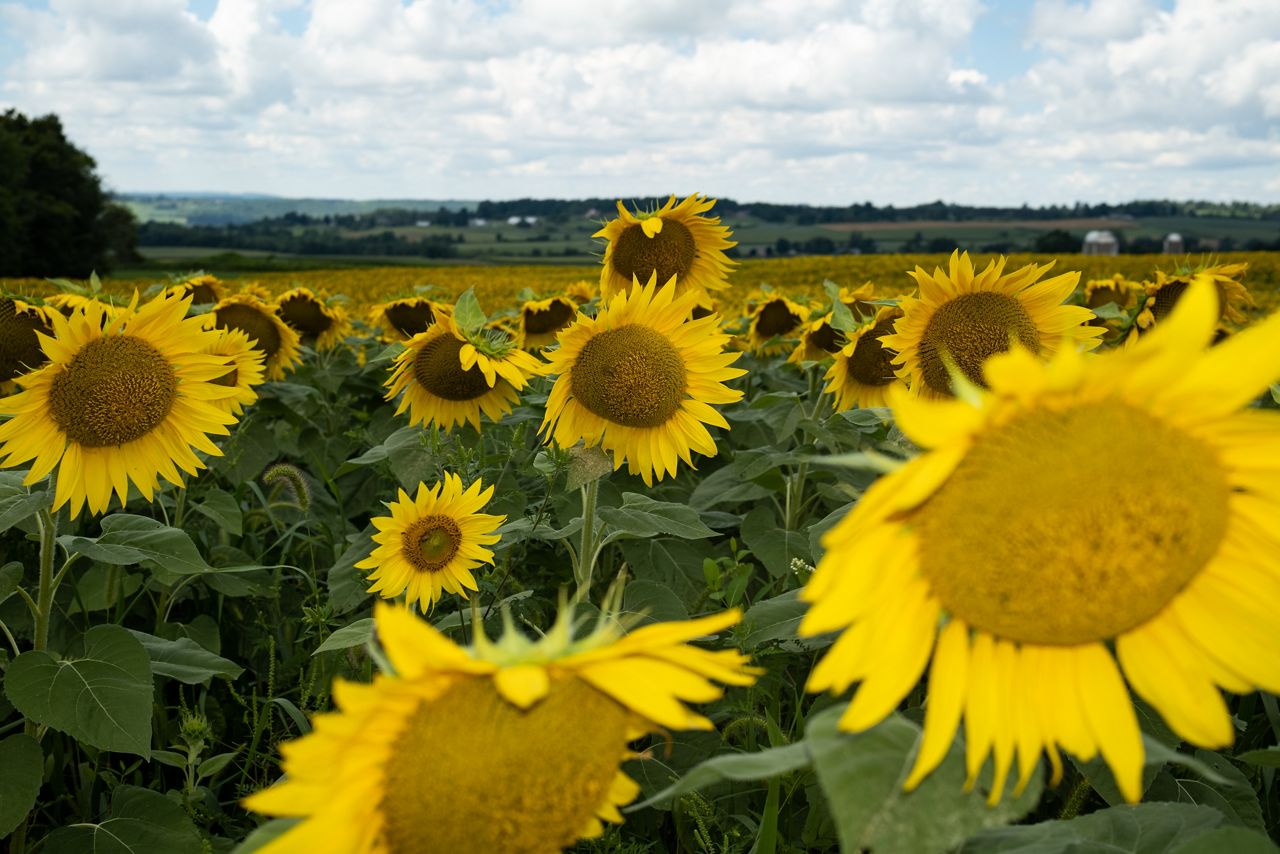 Greg Woodworth and his partner, Kelly, started the company in 2010. They started by producing pumpkin and squash seed oil, then now have added sunflower seed oil, using only U.S.-grown seeds.

“One of the touchstones for Stony Brook is that we work with local farmers and growers, and we had customers that wanted a cooking oil, said Woodworth. "It was my partner, Kelly, that came up with the idea of sunflower. So, we thought, why don't we see if we could find growers out here for sunflower and just do the same process.”

They have sourced the organic sunflower seeds from local growers near Cazenovia, and another farm just over the Pennsylvania border. The farmers harvest the seeds, clean, and dry them before shipping to Stony Brook. 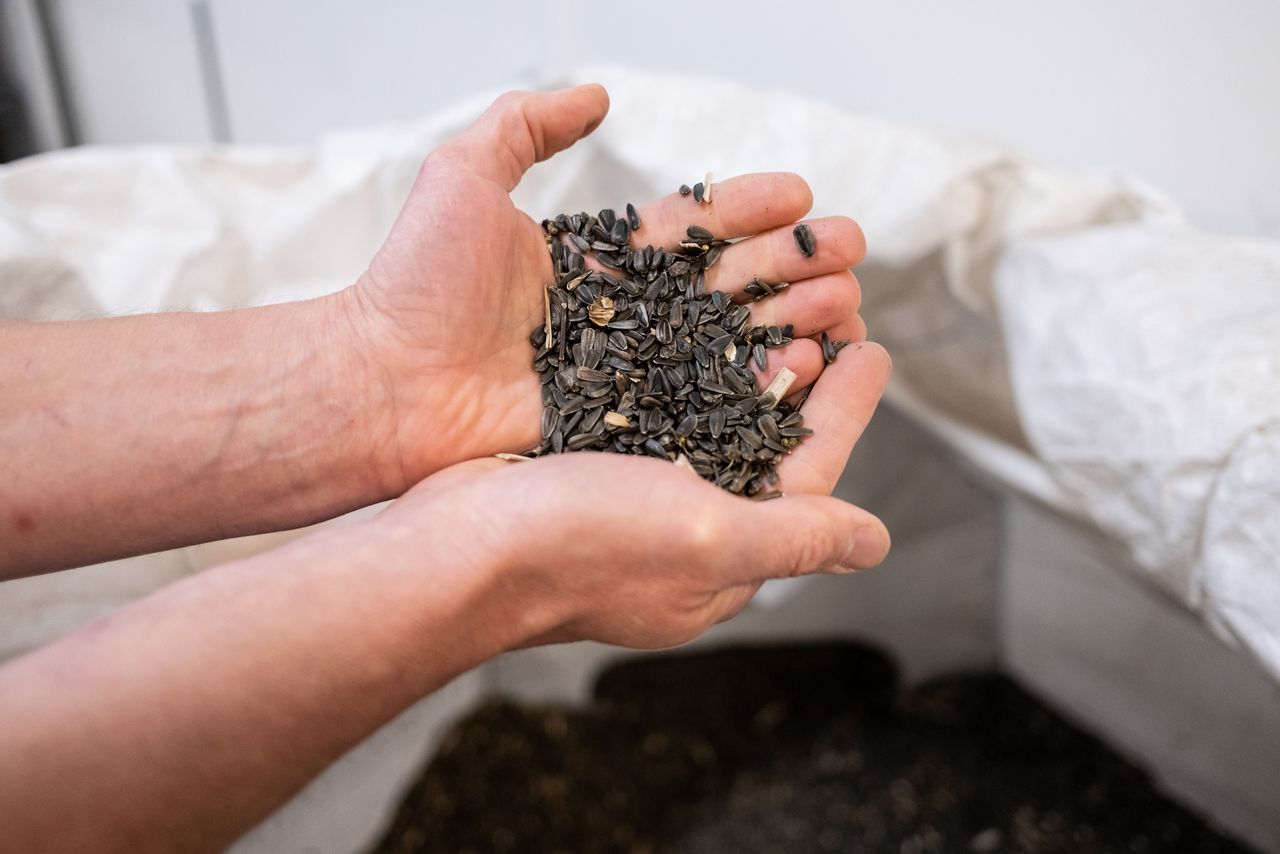 Greg holds seeds that will be pressed for oil. (Emily Kenny/Spectrum News 1)

Woodworth also plans to purchase seeds from Madison County farmer, John Stoker, who has been growing sunflowers since 2005 with his wife Jen. They are growing 10 acres of organic black oil seed sunflowers. The Stokers used to produce cold-pressed oil themselves, but moved onto selling the seeds to local farmers to use as seed for chickens. 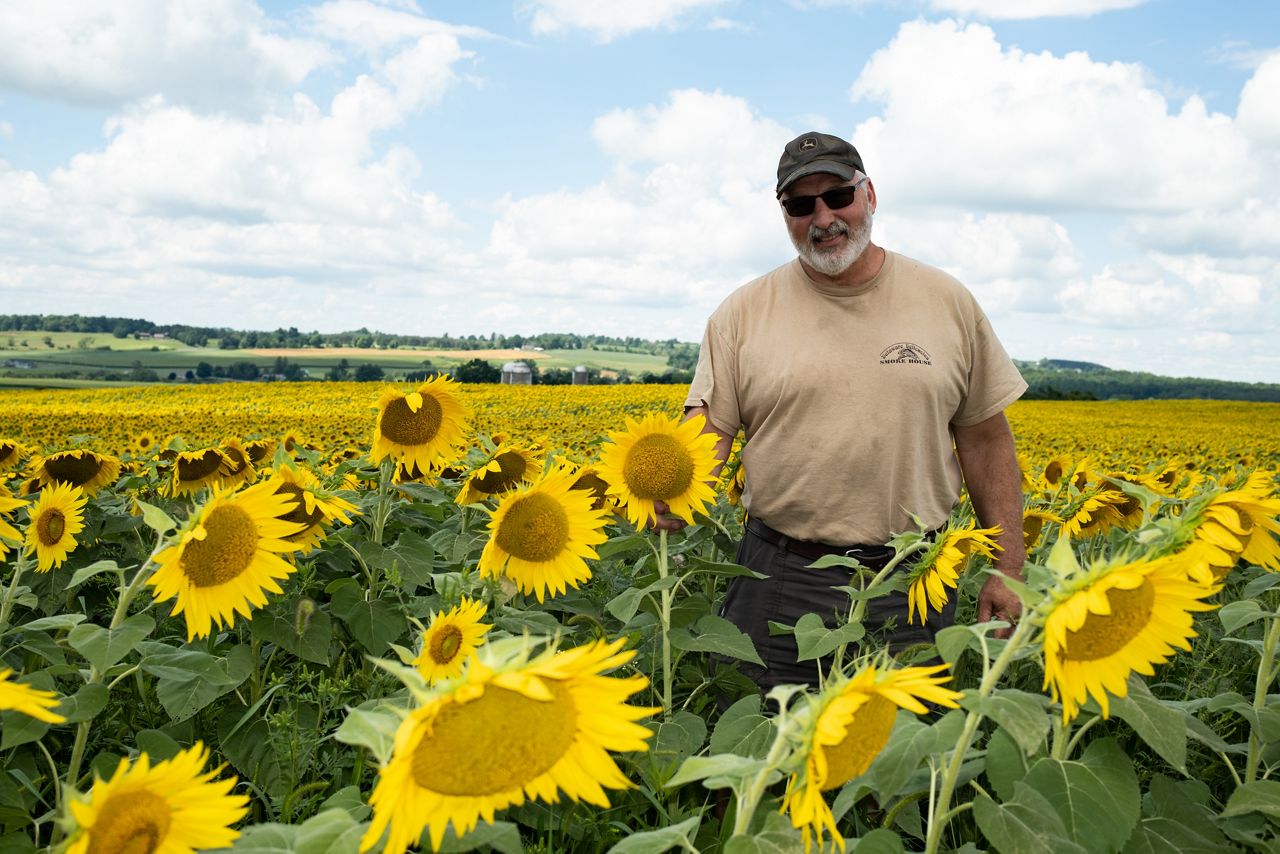 John Stoker stands in his sunflower field for a portrait. (Emily Kenny/Spectrum News 1)

“The black oil seemed to be the way to go just because it's great protein for chickens and you can press it for the cold press. It's very versatile,” said Stoker.

Stoker says they will harvest in late September or October then he will put the seeds into a bin for a few weeks to dry out then they will be ready to go to Woodworth. 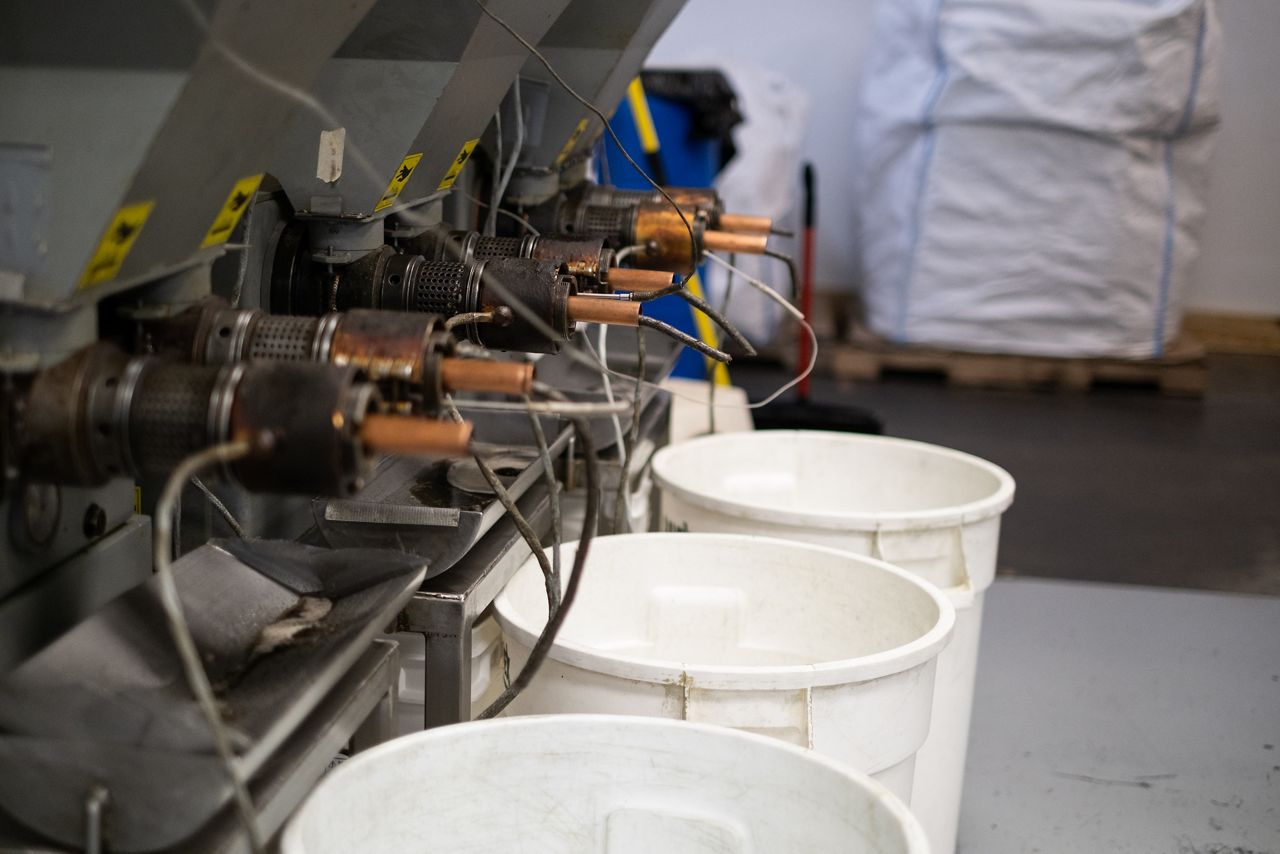 Presscake comes out of the oil press. It is made of the remains of sunflower seeds after they are pressed. (Emily Kenny/Spectrum News 1)

The sunflower seed oil Woodworth makes is cold pressed, unrefined, organic oil. So, after the seeds arrive at Stony Brook, they are run through an expeller press, which grinds the seeds then presses the oil from them. The oil then goes into buckets, where it is moved to 55-gallon drums where it will stay for the next few weeks so anything that came through the press settles to the bottom of the drum.

Their oil is unrefined, so they do not use any chemicals to remove things from the oil, but they do run the oil through a filter that takes the remaining sediment out of the oil then it is bottled to be sold.

The remaining pieces of the seed are made with the press into what is called presscake, which the Woodworth use for a variety of purposes. 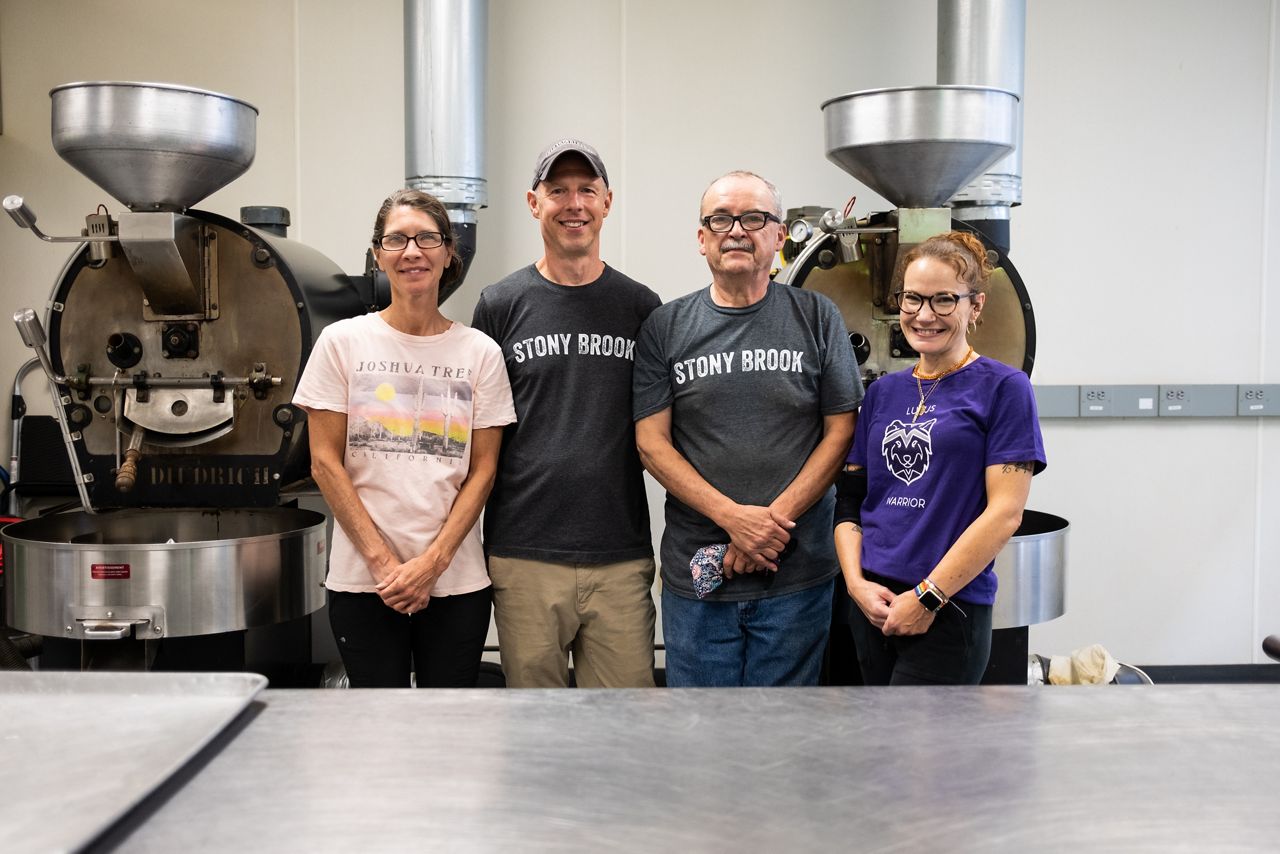 The availability of sunflower seed oil has changed since the Russian invasion of Ukraine because the two countries combine to produce 75% of the world’s supply, according to the Observatory of Economic Complexity. Due to this, many producers have been impacted by supply chain issues, but Woodworth says they have not experienced much of that because they use local growers.

“The beautiful thing is, we have not been impacted to the extent where we've had to phase out products or anything like that,” said Woodworth. “That's primarily because we're getting stuff locally. So, for companies that are getting things from overseas, or where they're having production or processing done overseas, or another part of the country where all of a sudden trucking and transit costs come in.” 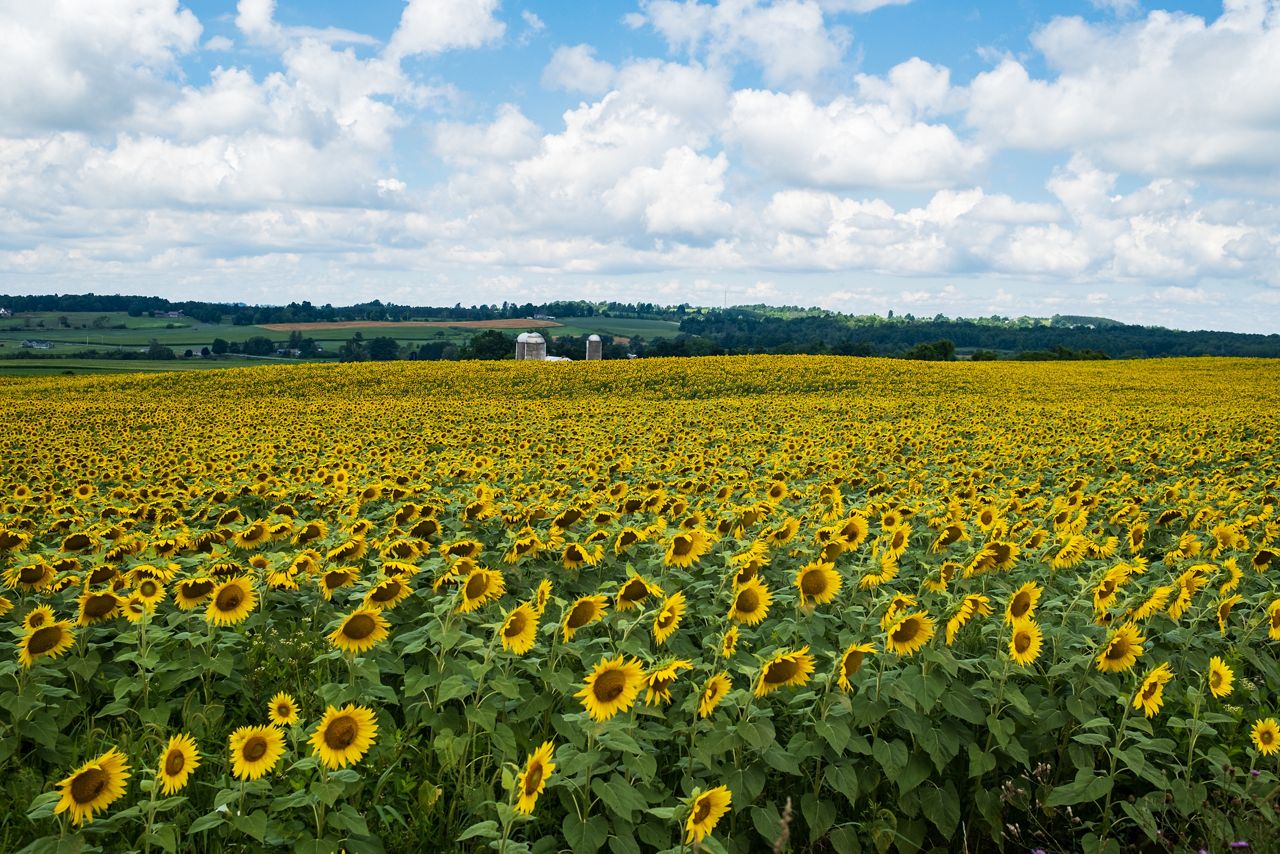 Stoker says the conflict in Ukraine will impact prices here.

“With Ukraine having its issues, you're gonna see some flowers go up [in price],” said Stoker.

Woodworth credits the agriculture industry in the area for their success.

“I think farmers are undervalued; they really are like the rockstars of the food industry because ultimately, no matter what it is, something has to come from a farm and some people forget that,” said Woodworth.