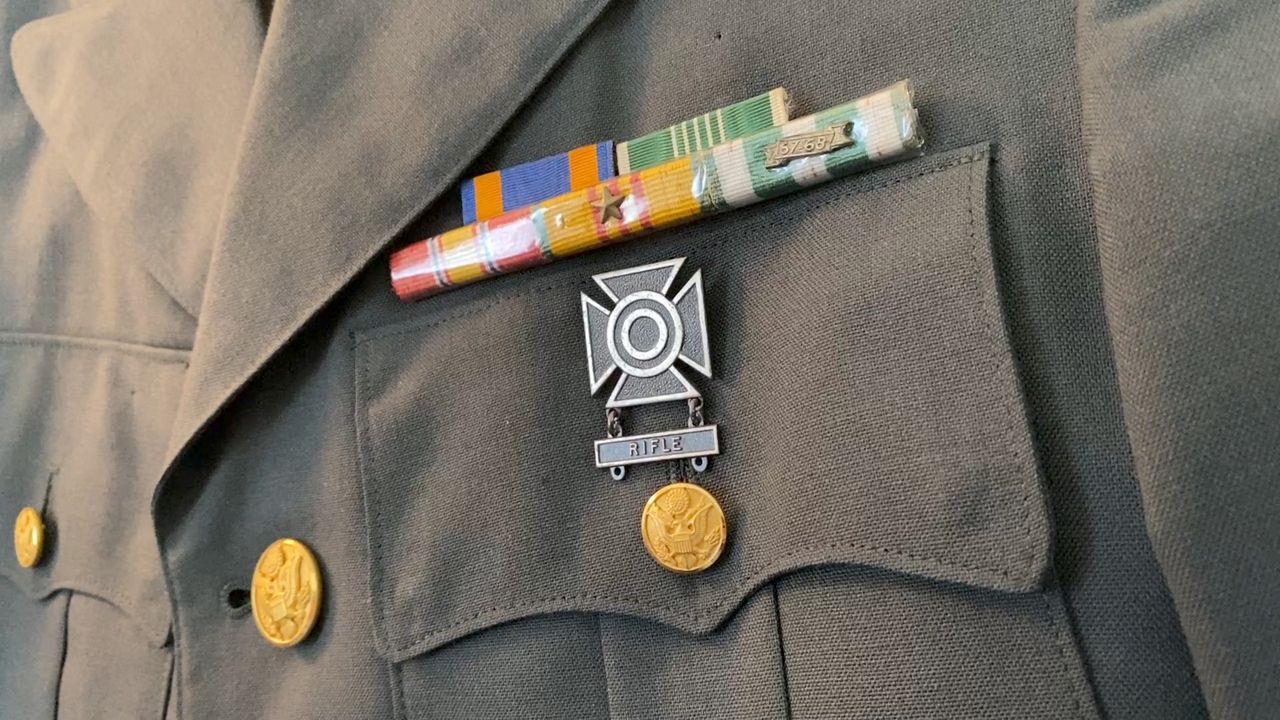 Each veteran on the Buffalo Niagara Honor Flight played a part in history, but their individual stories don’t often make it into the written record.

That's why many veterans are passing those memories down.

“It looks like you went to the beach,” said Hope Forsyth to her grandfather while looking at old photos.

“That was a jump area where we I was on a beach patrol and somebody landed in the water,” explained Frederick Forsyth, Hope's grandfather, a Korean War veteran who served in the Army.

The perfect throwback to end the day in D.C. 📨 MAIL CALL!! Vets got letters from friends and family…even strangers showing their appreciation! A wonderful gift they’ll all get to take home and read (Or in Stan the service dog’s case…eat) whenever 🇺🇸 #HonorFlight @SPECNews1BUF pic.twitter.com/tgoOt7bj4D

A picture might be worth a thousand words, but the veterans behind them could tell you infinitely more.

“There's a good chance I'm on that helicopter," said Dennis Behm while holding up a photo. He is a Vietnam War veteran who served in the Army as a door gunner. "We picked up I think four or five wounded GIs.”

Neither man spoke too much about their service.

“Anything that I had from Vietnam, it was stuck in a box in a basement and that's where it stayed for like 30 years,” Behm explained.

“I think everybody should know really what happens in these wars and what the reason was that it was being done and whether it was just or not,” said Forsyth.

Honor Flight for them was an opportunity to pay tribute to those lost, but also to give future generations insight into their own history.

The two vets shared this special day with their grandchildren.

Just wrapped up stops at the Korean and Vietnam Memorials. Now, to lunch! @SPECNews1BUF pic.twitter.com/kY2qjqxfOJ

Behm was at the Vietnam Veterans Memorial to find the name of his friend, a pilot listed as killed in action after he was shot down, but is still alive.

“We call him the Gray Ghost, he goes to our reunions,” said Behm.

It's a reminder of how differently things could have been.

“I consider myself very lucky," said Behm. "The survival rate for a door gunner over there was like 40%.”

He doesn't know the names of the 20 to 30 dead he transported, but he knows they're on the wall.

These vets are sharing their stories in place of those who can’t.

“They said the Korean War was a forgotten war, but we’re slowly getting everybody to know about it,” said Forsyth.

Whether jumping out of planes onto the slopes of Mount Fuji, or hanging from a helicopter looking for survivors in the middle of a lake in Vietnam, these anecdotes are important.

“I didn’t know a lot of his stories and I’m finding out more and more and it’s just amazing," said Amanda Brown, Behm's daughter. "His bravery and courage...If I could be half of that, I’d be a good person.”

These are lessons learned through pain and hardship, but as they headed back home, this day may have helped everyone realize just how valuable they are.

“He's always brave and strong to facing the war, when he's 20, I thought he could do anything," said Hope. "So can I.”

Those who spoke to Spectrum News 1 also said that sharing their stories also helps them, whether they're talking to their friends, family, or other veterans.