Washington, D.C.'s National Mall Shut Down Ahead of Biden Inauguration

With still several days to go before President-elect Joe Biden’s inauguration, any attempt to enter Washington, D.C.’s downtown is abruptly met with white, cement roadblocks, police vehicles on every corner and empty roads for miles around the U.S. Capitol, where Biden will be sworn in next Wednesday.

The National Park Service announced Friday that the National Mall will also be shut down at the request of the United States Secret Service.

For an event that usually draws thousands of Americans to Washington, D.C., under heightened security measures, this year’s inauguration comes with more than double the usual safeguards as officials instead discourage people from coming to the city.

In December, the Presidential Inaugural Committee recommended Americans watch the ceremony virtually instead, and there are several events planned online.

The iconic stretch in the nation's capital, where thousands of Americans usually gather to watch the ceremony, closed Friday morning and will stay closed through "at least" Thursday, Jan. 21.

The National Park Service noted that protests will be allowed in designated areas downtown, but participants will be screened and limited in number.

On Wednesday, officials began fencing in the entire 58-acre Capitol complex, which includes the Capitol itself and surrounding House and Senate office buildings. Camouflage-clad and armed National Guardsmen ringed the perimeter as well as another smaller, concentric fence around the Capitol building at its center. 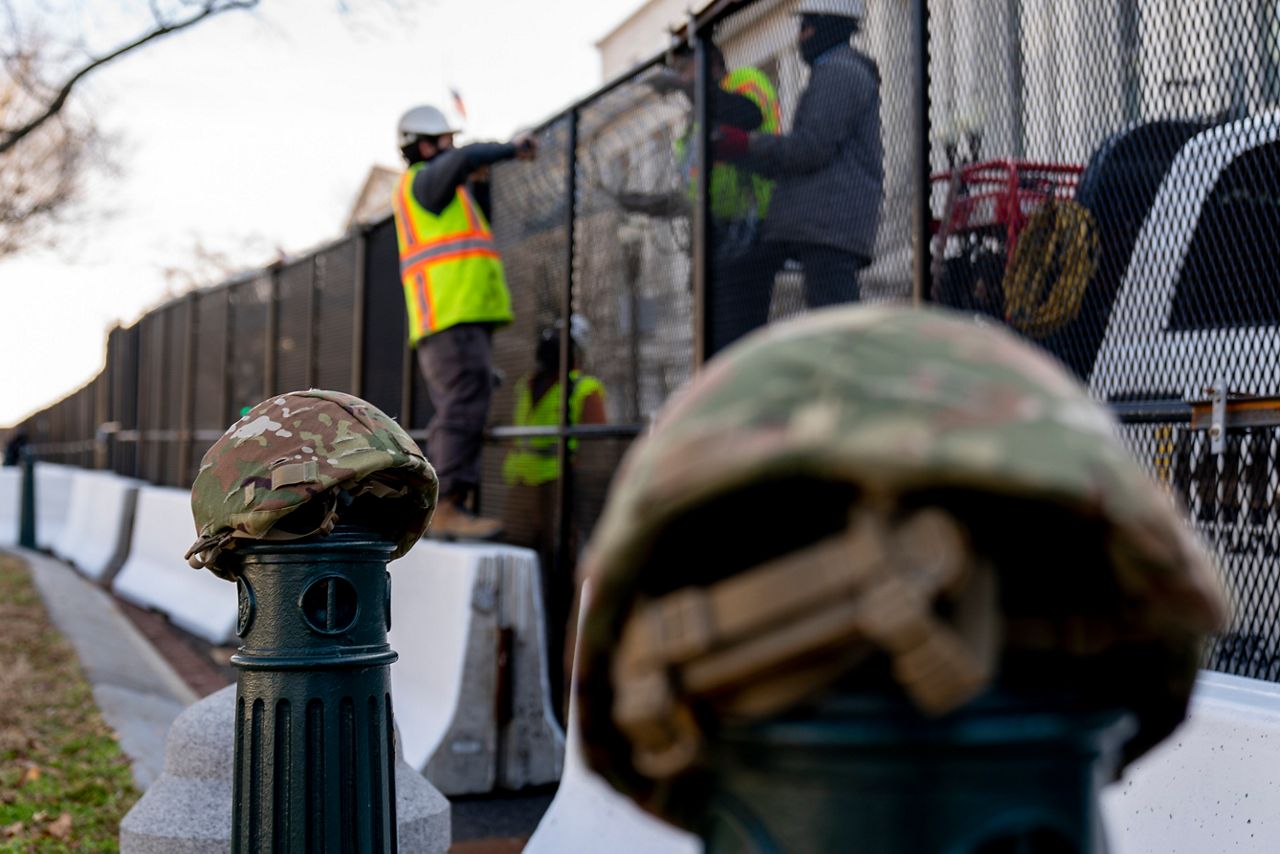 National Guard helmets are placed on top of barricades as workers install razor wire to the top of fencing on Capitol Hill in Washington, Thursday, Jan. 14, 2021. (AP Photo/Andrew Harnik)

With downtown sealed off from traffic and largely deserted, city transit officials also announced Wednesday that they would close 11 Metro stations starting Friday. The stations encompass the area that includes most government buildings, the Capitol, the National Mall, Supreme Court and the White House.

“The purpose of what you're seeing is to discourage somebody from engaging in an act,” said William Daddio, who was involved in security preparations for several past inaugurations as chief of the U.S. Mint Police. “That's part of the success story." 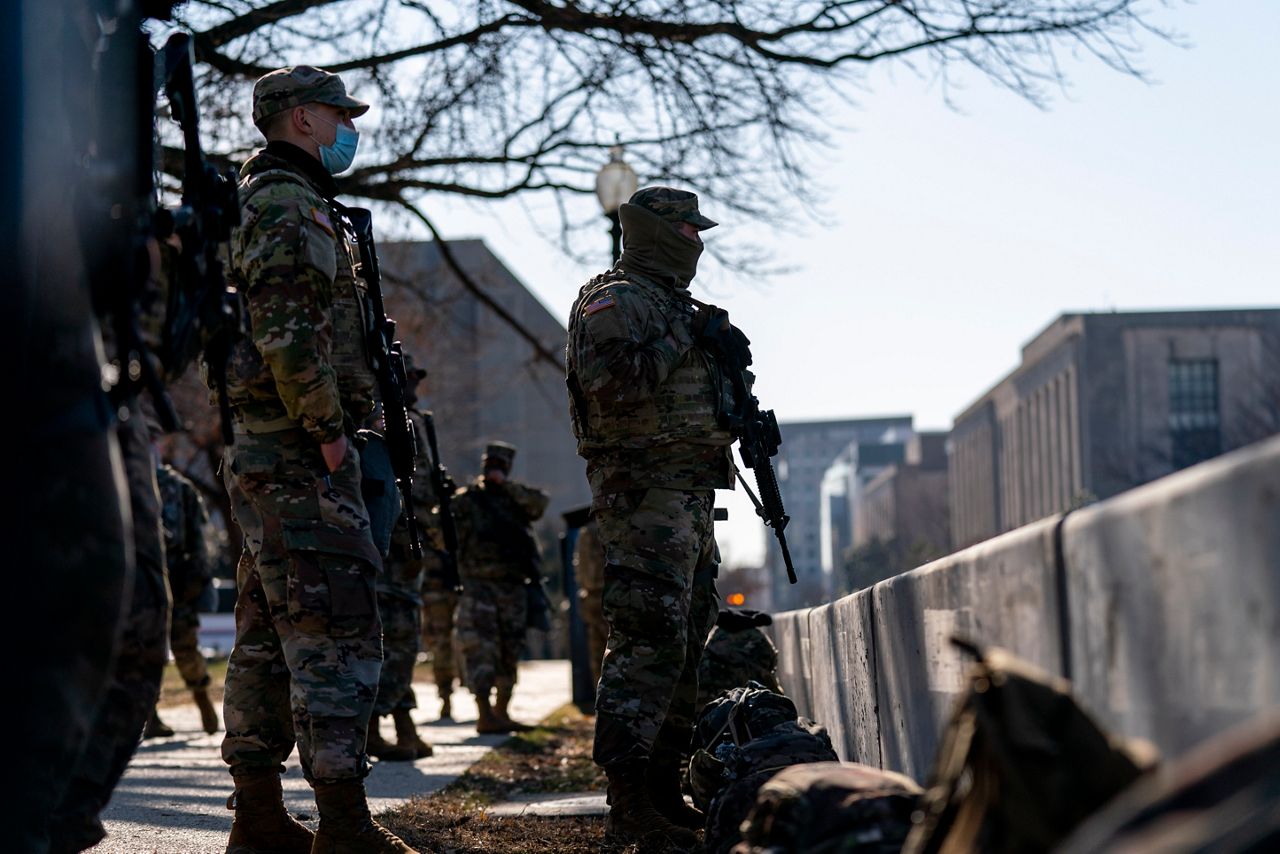 After a violent mob overwhelmed a thin line of Capitol Police officers last Wednesday, charging into the halls of the People’s House as lawmakers sheltered in place and barricaded their offices, federal security got a major boost, which includes up to 21,000 National Guard troops converging on D.C. by Inauguration Day. The Secretary of the Army authorized another 6,000 soldiers Thursday afternoon. 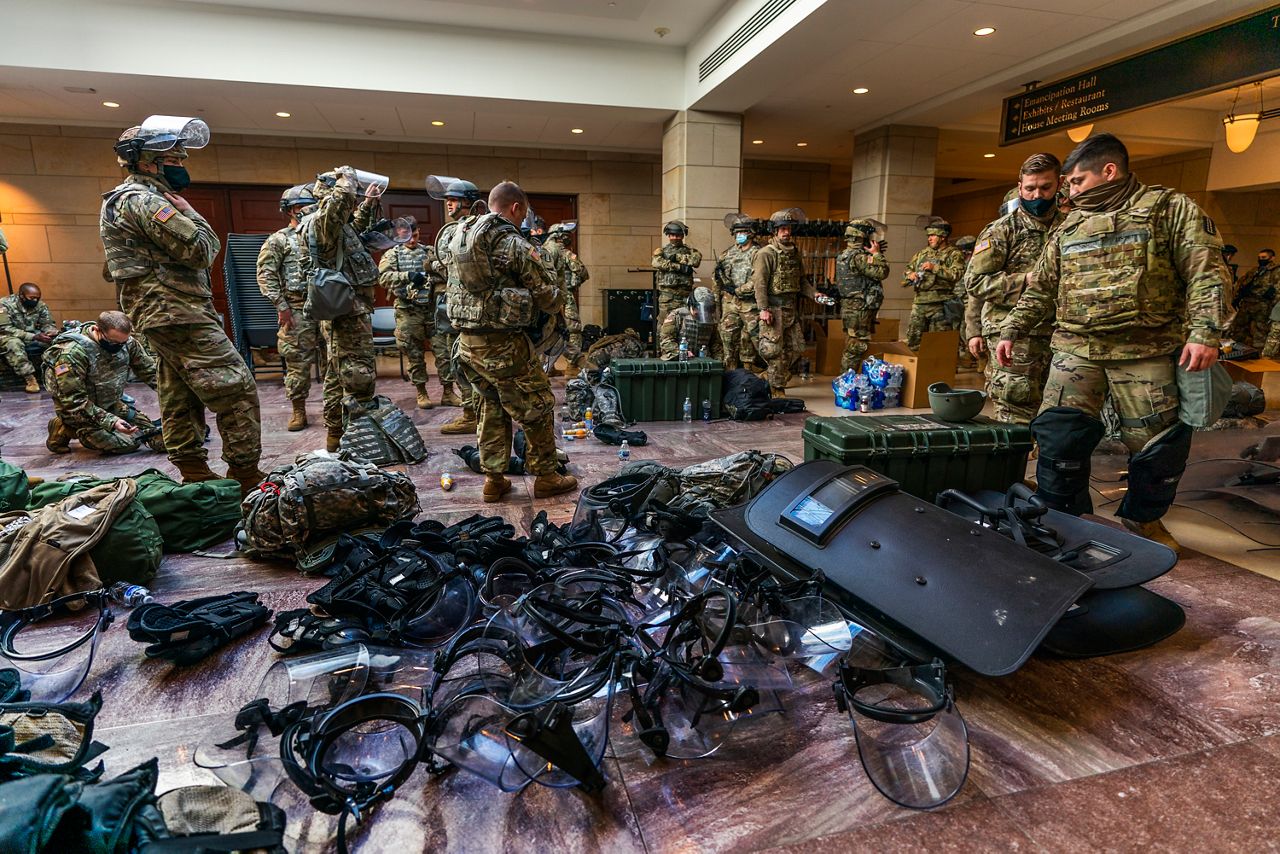 Members of the National Guard gather inside the Capitol Visitor Center one week after a mob of Trump supporters stormed the U.S. Capitol. (AP Photo/Manuel Balce Ceneta)

Wednesday marked the beginning of a special security designation that puts the Secret Service in charge of coordinating inauguration security plans for agencies across D.C.

“They'll all be under a unified command. So that's different from [last Wednesday],” Daddio said. “There's one central organization that coordinates with the military, the National Guard, Capitol Police, the D.C. police and all the other thousands of police departments we bring in to participate in this event.”

The Capitol Police issued a warning Thursday to anyone who might try and access the Capitol complex anyway, despite the fact that it is surrounded by thousands of guardsmen and wire fencing.

"Anyone attempting to unlawfully gain access to the Capitol Grounds by climbing a fence or any other unlawful means will be subject to an appropriate use of force and arrest,” the statement read.

Roads as distant as two miles from the U.S. Capitol were already closed off early this week, and police presence throughout the capital city has only thickened as it inches closer to Inauguration Day.

“We're more prevention oriented. And the Secret Service is very good at this stuff,” Daddio said. “And it's Washington, you know? We know what building top we need to be at. We know which roads we need to cut off.”

Daddio explained that typical inaugurations already include “well-organized” preparations, including security checkpoints, snipers and additional officers assigned to respond to any incidents. This year’s planning is a heightened version of that.

On Wednesday, the FBI and the Secret Service briefed President-elect Biden and his team on the inauguration security plans.

“The transition of power from one administration to another is a touchstone of American democracy,” Biden’s transition team said in a statement. “President-elect Biden’s team will be receiving daily briefings on the security and operational preparations to ensure the transition unfolds smoothly.”