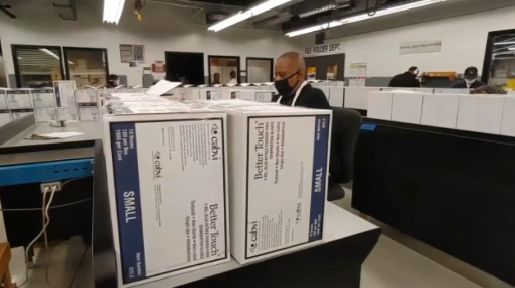 The Faces Behind PPE: Utica Workers Prepare Packages for State

Dennis Webster is one of the people overseeing Central Industries’ operations, and it’s something he has a passion for. His grandfather was blind, and received help from the organization leading the business.

“My father always says, ‘Your grandfather would be so proud,' ” said Webster, the Senior Vice President of Manufacturing and Public & Government Affairs.

Webster is getting a new office on a lower floor, where the action is.

“Have to be available at any moment, because the next suggestion that could be a big winner could come right through the door," he said. "I want to be here right here for them. Any issues, concerns they have, or even just a friendly, ‘Good morning or Good afternoon.’ ”

“I have diabetes, but diabetes don’t have me, because I’m not giving into it,” Ford said.

Ford is thankful for the opportunity to work.

The lower floor is where employees package gloves for the TSA, all of New York City’s hospitals, and other clients. Demand has gone up.

Most of the workers are visually impaired or blind.

They package multiple items including gloves, masks, pens, and stethoscopes. Less than 30 percent of working age adults with a visual disability were employed in the United States in 2016, according to the National Federation of the Blind.