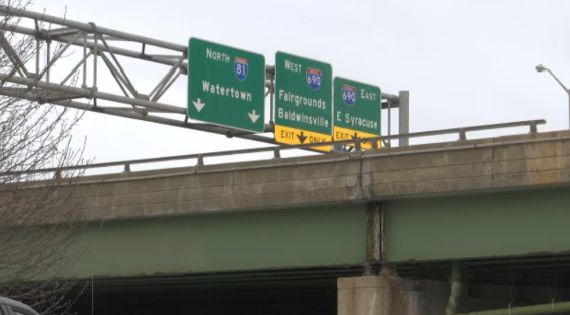 Town Supervisors Stand Up Against Future of I-81

When it comes to I-81, there's no doubt something has to be done. The question is what.

There are three options on the table.  The first is to rebuild the viaduct which many say has divided the City of Syracuse.

The second is to replace the roadway with a tunnel which is the most expensive option.

The third is a community grid redirecting traffic to Route 481.

"I remain a strong supporter of the community grid option because I believe it provides the greatest opportunities to transform both the city and the region," said Syracuse Mayor Ben Walsh.

Coming together Thursday, Supervisors supported a combination of options.

“We are unanimous in that. We favor the grid, but we also want the tunnel. If the tunnel wasn't to be built, then we would want the viaduct built. We believe in a strong City of Syracuse. We believe that we either swim together or we sink together, but you can't short change the thousands of residents in the suburbs," said Mark Venesky, Town Supervisor.

"The concerns that people have laid out related to the community grid, I understand. I think that they can be worked out and I think they can be mitigated, but my goal is not to be dismissive," said Walsh.

But, many outside the city feel ignored.

"Everybody's voice has been heard,” said Onondaga County Executive Ryan McMahon. “I just think that there's a difference of opinion. My job is unique. I represent everybody in the county both the towns, villages and the city, so we're looking for a compromise. We think the hybrid option is the compromise.”

Town Supervisors and Mayor Walsh all say they hope to work together to come up with the best solution.