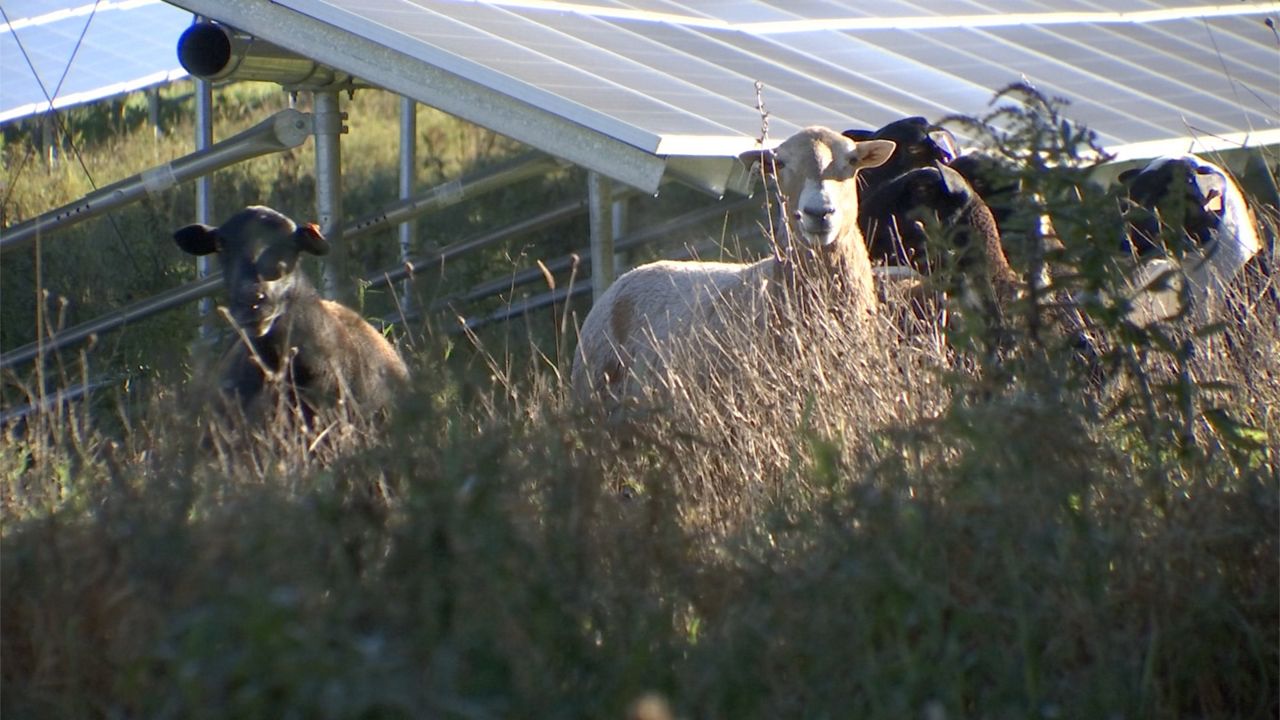 NEWFIELD, N.Y. — Solar arrays, which generate electricity, are an increasing part of the landscape across New York. They are also controversial in some towns, where neighbors say they’re unsightly. Solar is a big part of the clean energy push. In some parts of the state, solar fields are being kept up by a unique sort of grounds keeping crew.

Lexie Hain’s workplace is a solar installation on 40 acres of Finger Lakes land.

“This is taking off all over the country,” Hain said.

What she’s talking about isn’t exactly what you might think. A flock of sheep might seem out of place here. But they have the run of the land at a solar array in Newfield, not far from Ithaca.

“They're truly wonderful creatures,” Hain said. “I really like sheep.”

It’s the sheep’s job to keep the spot trimmed down. Hain is a farmer, a shepherd, who is also leading an effort to promote sheep grazing around solar fields.

“The companies I'm working with know that they can hire sheep,” Hain said. “They can hire a farmer. Instead of hiring a landscaper. They need to make sure there's no shade on their panels. My sheep, when I manage them, make sure of that.”

Solar is a major part of New York’s push for renewable energy.  Hain got into the solar grazing business five years ago. She is co-founder of American Solar Grazing Association, a firm which works with community and utility scale developers.

Hain says grazing the sheep makes sense because sheep are more environmentally-friendly than fuel-powered lawnmowers. Financially, it’s seen as a benefit for both farmers and energy companies.

“It’s happening out there for sure,” said Todd Schmit, associate professor of agriculture economics at Cornell University. “The question is, can we do more with it.”

Schmit is leading a Cornell University study with the USDA looking at the economic benefits of sheep grazing and solar arrays.

“Sometimes this is solar development that is happening on farmland or formerly farmland,” he said. “The question became, what’s the feasibility of co-locating agriculture production activity with renewable energy production?”

The partnership could help farmers with things like long-term contracts for their grazing services. Solar installations have become controversial in some parts of the state. Supporters of grazing say the sheep could help calm some of the opposition because the land will still, in a way, be used for agriculture.

“What is wonderful about this Cornell project is that we will be able to look for efficiencies,” said Hain. “Hopefully reduce costs and work through some of the mechanics of how this industry can scale and support farmers to match the demands of the growing solar energy industry."

It’s an industry in New York which is only expected to grow, and watched over by a flock that’s not out of place at all.