Lake Effect Snow: The Essentials of This Weather-Making Phenomenon

The Lake Ontario shoreline is one of the world’s premier places to get a spectacular view of the sunset. It's a popular place for tourists and locals alike, especially during the warm months of summer. However, come winter, that same body of water can be the fuel for miserable road conditions, low visibility, and hours upon hours of shoveling.

What Is Lake Effect Snow?

Lake effect snow is caused when cold air blows over and teams up with warmth and moisture rising from the lake. This rising air then produces clouds and eventually precipitation, initially in the form of rain when daytime temperatures start to cool during fall and then snow during the coldest times of the year in winter. There has to be a certain temperature difference — 13 degrees Celsius or greater, to be exact — between the surface of the lake and approximately 5,000 feet up in the atmosphere for lake effect precipitation to form. This is why the temperature difference in the vertical (warm lake water versus cold incoming air) is crucial to how much lake effect we see.

Why Does the Lake Stay So Warm for So Long?

Water has what is referred to as a high specific heat. This essentially means that water takes longer to warm up and cool down versus other things, like air. The lake gets a prolonged opportunity to warm up during the spring and summer months as air temperatures above the lake get warmer, and then retains enough of that warmth during the winter to produce lake effect snow because it cannot cool as quickly as the air above it.

Why Do We See So Much Lake Effect Snow?

When the jet stream, or steering winds in the atmosphere, propels a storm system toward us here in the Northeast, we typically have a cold front, or the leading edge to colder air, work through. Once a cold front passes through the region, a wind shift typically occurs into a westerly or northwesterly direction accompanying the arrival of colder weather. If the other conditions highlighted above verify, lake effect snow can form given the onshore flow of the wind. Some of the biggest totals of lake effect snow can come from bands that set up perfectly west-to-east, taking in as much of the lake’s surface area as possible, to fuel a lake effect snow band. The larger the area of water the band is able to develop off of, typically the more moisture and relative heat there are to form lake effect snow. This is referred to as fetch.

Does Geography Play a Role in How Much Snow Accumulates?

In a word: Yes. In our region, the Tug Hill Plateau commonly sees the biggest snowfall totals of the season. This is due to a phenomenon called orographic lift. Essentially the warmth and moisture rising from the lake that combine with the cold winds blowing across it are forced upward, resulting in increased cooling. This, in turn, produces more snow.

How Much Snow Can Fall from a Lake Effect Event?

Lake effect snow bands can have a lifespan ranging from a few hours to many days. Therefore, minor to major accumulations can occur in any given lake effect event. One of the most memorable lake effect snowstorms in recent memory was in February 2007. Classified as an “epic massive event” by the National Weather Service, this storm set records for “duration and amount” of snow. Between February 3-12, 141 inches of snow fell in Redfield, on the Tug Hill Plateau. 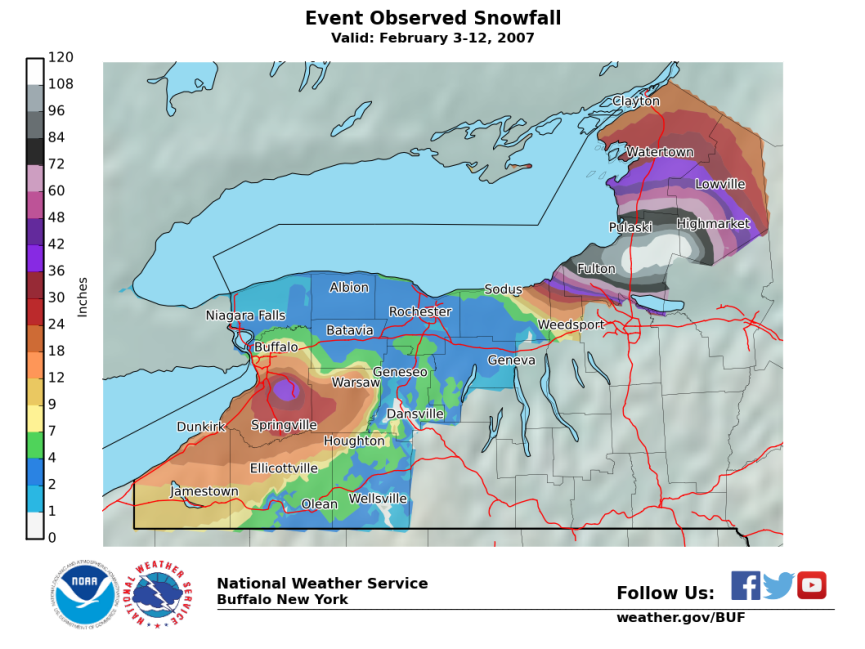 As we continue to add up snow this season, both from large-scale systems as well as lake effect, we can certainly look forward to those warmer days and beautiful sunsets after the winter season is over.