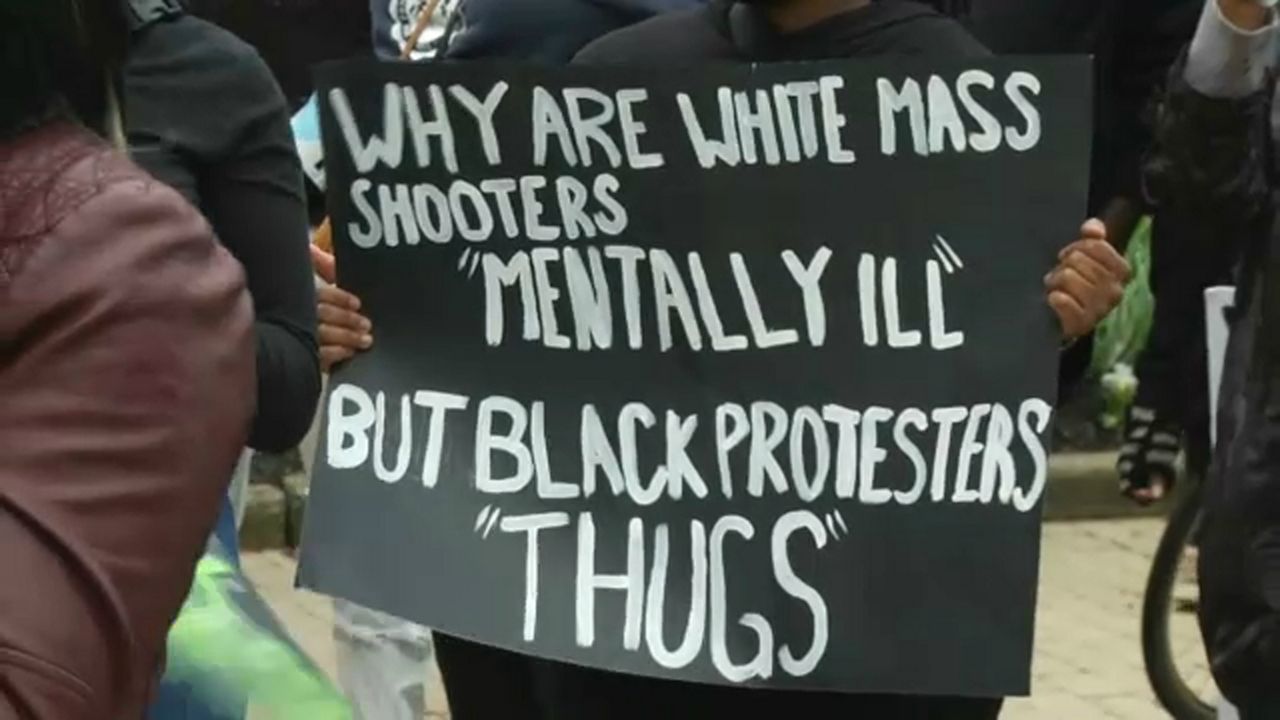 The COVID-19 pandemic continues to disproportionally hit Black and Brown communities, and the protests over the killing of George Floyd continue across the country — including in Western New York, where the overlap between these two crises made national headlines after two Buffalo police officers were filmed pushing a 75-year old activist to the ground, where he laid motionless and bleeding.

In the over two weeks since the first protests started, New York state introduced and passed a flurry of laws under the “Say Their Name” reform agenda to address police brutality.

In three months, the nation grappled with the deaths of Ahmaud Arbery, Floyd and Breonna Taylor.

We remind New Yorkers that by talking about it together, we can get through it-- together.#traumainformed #MentalHealthAwareness #BetterTogether https://t.co/upIukRExAK

Racism can impact someone’s mental health as early as childhood, according to an American Psychological Association meta-analytic study.

The study notes the perception of race or ethnic discrimination is linked to higher levels of depression, psychological distress, poorer self-esteem and greater engagement of substance use.

On February 23, Arbery was jogging in the Satilla Shores neighborhood in Georgia when Gregory and Travis McMichael allegedly chased, shot and killed Arbery.

The Georgia Bureau of Investigation arrested Gregory and Travis McMichael nearly a month later after a video of the incident began to circulate the internet.

“The idea of simply taking a jog down the street might be seen as something anybody would do, but if you’re a person of color there are other considerations, you might feel more anxious,” Shallowhorn said. “Anyone who is a person of color who is driving and might see a police car behind them might automatically tense up. I know that I have had that feeling myself."

Approximately 30 percent of African Americans with a mental illness receive treatment compared to 43 percent of the total population of people with mental illness, according to the 2018 National Survey on Drug Use and Health.

In addition to the stress and anxiety stemming from racism, many people are still feeling the stress the pandemic has had on them.

“There are so many ways that stress affects our mental health and that appears to be one of the primary factors that people are dealing with right now — especially during COVID and now it’s really since the last week during the protest,” Shallowhorn said.

These health inequities of COVID-19 are due to the “anti-Black racism institutionalized within the American political system,” according to a Yale study released on June 8.

Frequent exposure of traumatic videos and footage like that of the video of George Floyd can be emotionally distressing for some.

One study documented that frequent exposure to graphic violence is emotionally distressing to journalists and those who viewed the content.

“These are images we’ve been seeing in some form or fashion for hundreds of years,” Shallowhorn said. “For individuals of color, Black people, we’re talking about something that goes back to origins of slavery that has been passed along the years since which resulted in historical trauma and post traumatic slave syndrome.”

Post Traumatic Slave Syndrome is based on the quantitative and qualitative research of Dr. Joy Degruy, who holds a master's degree in clinical psychology, and a Ph.D. in social work research, and it documents adaptive survival behaviors as a consequence of multigenerational oppression.

Shallowhorn said in addition to macro-level changes at the policy level, like the “Say Their Name” reform agenda, there are ways individuals can practice maintaining their mental health during these crises.

Some of those tips that Shallowhorn gave that people can do at home include meditation, proper sleep and disconnecting from social media and the news if it disturbs you.

“If you find yourself struggling to the point where you feel yourself becoming more anxious, more depressed and it’s lasting more than a couple weeks — certainly during COVID and so forth— that would be somewhere I’d recommend a mental health professional,” he said.

Mental health resources for Black Americans: this list is not exhaustive.

The Obama Foundation curated a list of resources to address the trauma of these events, which can be found here.

Open Path Collective is a lower fee therapy nonprofit that is accessible across the country. To learn more, visit their website.

Inclusive Therapist is a mental health service that helps curate and create spaces for marginalized groups. To learn more, or find a therapist visit their website.