There are more people with mental illness incarcerated than those receiving medical treatment in hospitals, according to a 2014 report by the Treatment Advocacy Center.

Many of those individuals would have been treated in psychiatric hospitals before a movement called deinstitutionalization diverted funds to community-based services and led many of these facilities to close.

"Deinstitutionalization started many decades ago, but what we've learned is that individuals can live in the community, with good support, with good treatment," said Michael Ranney, the former Erie County Commissioner of Mental Health. "As beds have decreased there's been a reinvestment of the dollars that had previously been spent on the inpatient care that has been invested into the community."

The movement’s momentum spiked in the late 1950s with the introduction of the first successful anti-psychotic medicines, which allowed more people to live in the community independently.

But, many communities didn’t feel the full weight of this movement until the Recession in the early 2000s when funding for community-based programs was cut.

"About 15 years ago, a lot of the treatment resources in the community began drying up,” said Thomas Diina, the superintendent of Erie County Holding Center. “A consequence of that is the jails started seeing a dramatic uptick in individuals coming into custody with a mental health diagnosis, substance abuse issue, some past trauma, or any combination of those three."

Despite the state economy improving since the Recession, state funding for human services aid to local governments declined by 26 percent, according to a 2019 Center for New York City Affairs report.

"Over the last several years, this [Gov. Cuomo’s] administration has pushed more and more services to community-based services, which sounds wonderful,” said Republican State Sen. Robert Ortt. “The problem is very often with this community there is a lag in those services getting in the community and this is a population that sometimes doesn't seek out the services it needs."

The New York State Office of Mental Health licensed 601 in-hospital psychiatric beds for about 1.6 million people in the eight counties of Western New York, based on July 2018 census data. 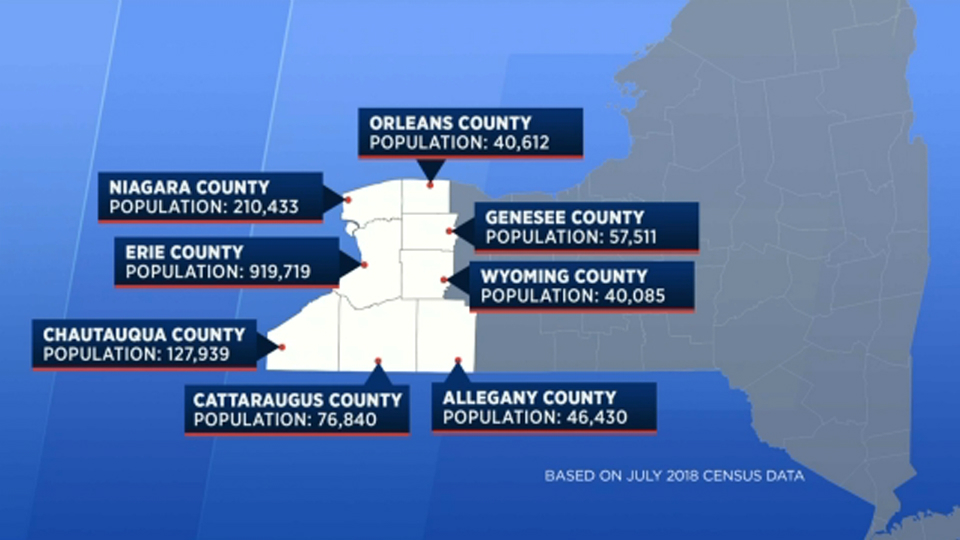 The bulk of those beds are in Erie County.

The state licenses 155 at Buffalo Psychiatric Center more than the combined total 152 of beds in the other seven counties of Western New York.

Three of those counties, Allegany, Genesee and Orleans, have no licensed beds. 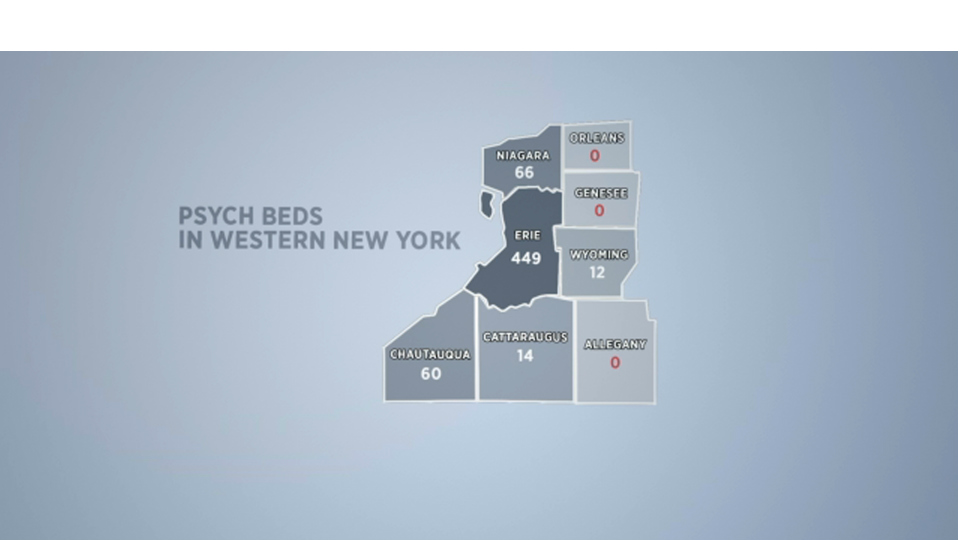 Ortt serves as the chair of the Senate Committee on Mental Health and Developmental Disability, and represents Orleans and Niagara counties, and notes that when members of those communities need higher levels of care they can’t find it in their area.

“They have to travel,” Ortt said. “That’s one of the pushes is we need to get beds in these rural counties so they have access to them, but yes right now they would have to travel wherever a bed is available.”

Erie County accounts for 449 including children's units and its resources are used by residents in surrounding counties.

The ideal bed to population ratio is between 40-60 beds per 100,000 people, according to The Treatment Advocacy Center.

That number could potentially drop to 581, if the Brooks-TLC Hospital System in Chautauqua County shuts down its 20 psychiatric beds on January 1.

“Before approving any closure, OMH [Office of Mental Health] works with and consults other hospitals and stakeholders in the region to determine the impact the closure would have on the local mental healthcare system and how the services could be delivered by other providers,” according to a statement by the New York State Office of Mental Health.

"The decrease or scarcity of beds is a relative issue,” said Dr. Brian Joseph, a medical director at BryLin Hospital. "For the more general public with depression, anxiety, crisis problems, there would be enough beds."

Joseph notes that in-patient hospitalization remains a necessary treatment option for those who need higher levels of care — and there are not enough services for that population.

Over 30 percent of people with serious mental illness first engage with the mental health system in North America through an encounter with law enforcement, according to the Study in Blue and Grey by Canadian Mental Health Association (see below).

"One thing is for the more seriously and persistently and chronically mentally ill, the police are always open and the jail is always available,” Joseph said. “At the time I worked there and we were the largest mental hospital for the seriously mentally ill Western New York and that's true across the country."

Possible solutions to the problem

Advocate to your state senator for a thoughtful increase in licensing of in-unit psychiatric beds in Allegany, Genesee and Orleans counties and for a thoughtful increase in services for specialized populations like those with serious mental illness or children.While the lack of in-unit psychiatric beds is leading some people to get treatment behind bars—this is only one aspect of how Western New Yorkers have to navigate the mental health system. Tune in tomorrow at 6 and 11 p.m. for the second story in the series which will tackle access to outpatient care, and the increase of those with mental illness at the Erie County Holding Center.