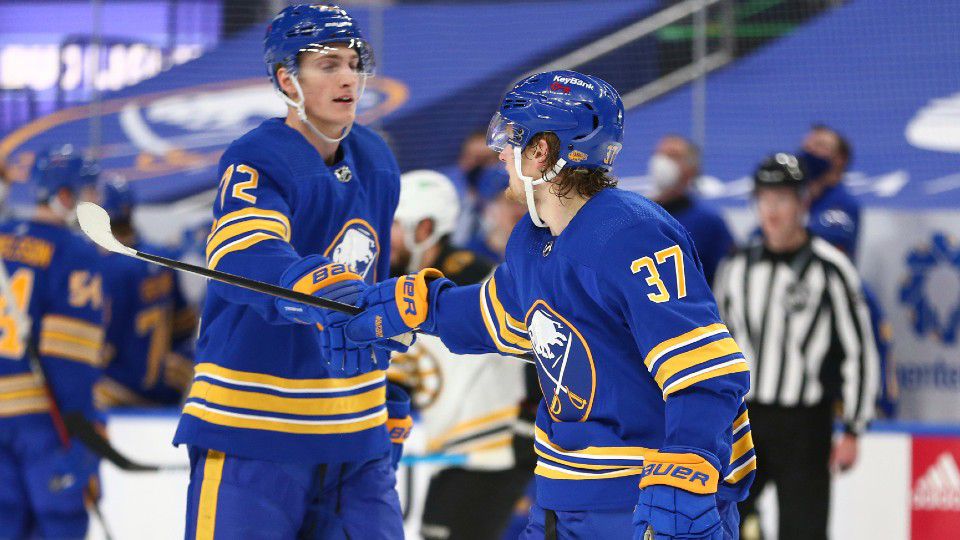 Sabres ready for leadership roles if Eichel, Reinhart get traded

BUFFALO, N.Y. — On Monday, Jack Eichel and Sam Reinhart sure made it seem like they don't know if they'll play another game with the Sabres. If either longtime Sabres are traded, they'll be missed by their younger teammates.

"I'm friends with them. I've enjoyed my time playing with them, for sure," says 22-year-old center Casey Mittelstadt. "It's been nothing but good things to say about them. It's out of my control, but it's definitely tough to hear."

Mittelstadt's take on Eichel/Reinhart's dissension w/ the #Sabres: "We've all become friends...It's hard to hear. It's out of my control. I've enjoyed my time playing with them, for sure." https://t.co/CpN2NKOTAP

"I can only say great things about those guys. From the moment I was drafted, Reinhart being there and Eichel calling me," says rookie Dylan Cozens, a first-round pick from the 2019 NHL Draft. "Those guys have been great to me since the moment I got here. They helped me get my feet wet in this league."

"It's pretty easy playing with Jack. It's a lot of fun," says Tage Thompson, a 23-year-old forward who joined the Sabres following the Ryan O'Reilly trade. "He's obviously one of the best players in the world. Just trying to keep up with his pace — he's so fast. It makes you a better player. I enjoyed my time playing with him. It was a cool experience."

Tage Thompson calls Jack Eichel "offensively gifted" and "one of the best players in the world." Somewhat ominously, he adds "I enjoyed my time playing with him" #Sabres

Eichel and Reinhart have been two of the team's leaders for the better part of a decade. The Sabres would need new leaders in the event of a trade, and their younger teammates think they can fill the void.

"I do think there'll be room for me to step up and be more of a leader, for sure," says Cozens.

"I think every guy wants to be a leader, but I also am going to come to the rink and be myself every day," says Mittelstadt. "I'm going to work hard. If something needs to be said, and I think I'm the guy to say it, I'll say it. But I'm not going to go in next year and start parading and yelling at different guys. I'm just going to go to the rink, and be myself."

When asked if Dahlin could be a leader (presumably in the post-Eichel era), he says "I've always been a leader on my teams. We'll see. I'm excited for the future." https://t.co/CpN2NKOTAP

"When I was younger, in junior, I always was one of the leaders on the team," says Rasmus Dahlin, the top overall pick from the 2018 NHL Draft. "We'll see. I'm excited for the future."

I don't know how excited fans are to potentially see two franchise players leave town; General Manager Kevyn Adams has a long offseason to try and figure out how to deal with this.