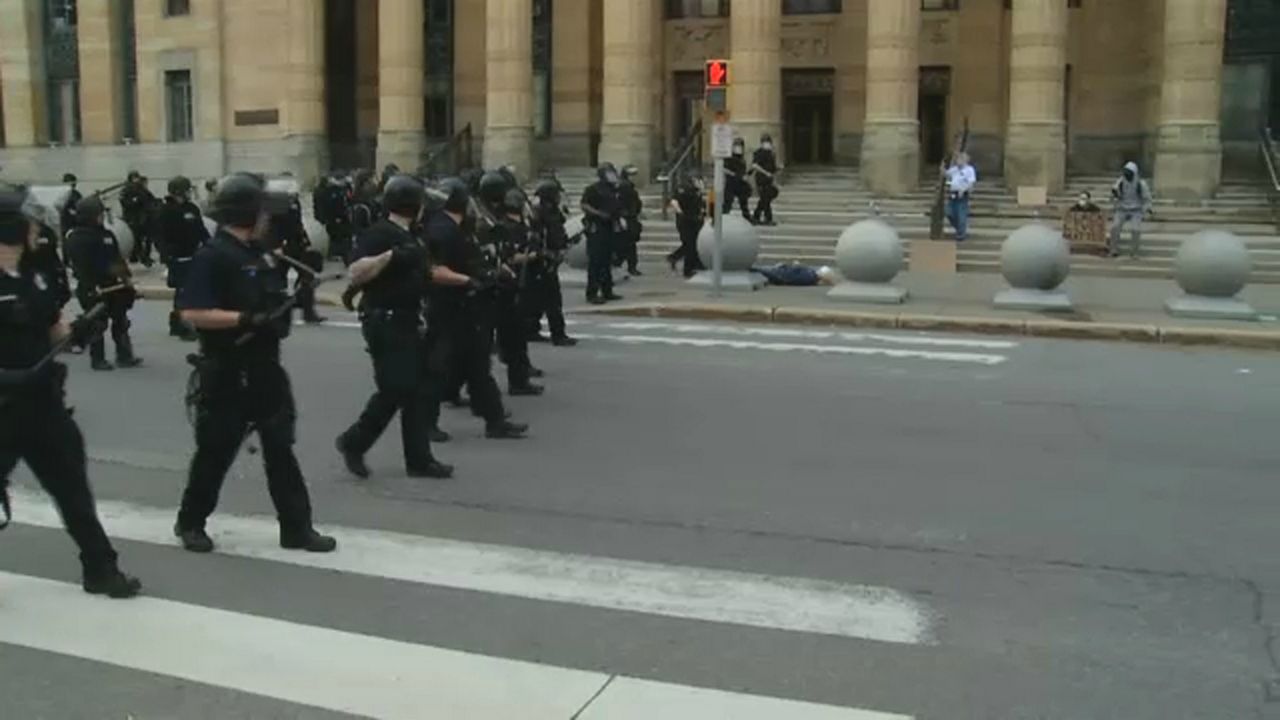 Warning: The video shown below is graphic in nature.

Two Buffalo police officers have been suspended without pay after they were caught on camera Thursday night allegdly pushing a 75-year-old man during a protest, where he fell back and hit his head.

The man, identified as Martin Gugino, can be seen walking up to officers who are trying to enforce the 8 p.m. curfew. There is a brief exchange before he falls backward. An officer near Gugino can be seen allegdly pushing him, causing him to stumble, fall, and hit his head on the cement outside city hall.

Activist group PUSH Buffalo, of which Gugino is a member, says he would attend many protests in Buffalo.

Current situation in #Buffalo as police work to enforce the 8 p.m. curfew in Niagara Square. Caution: there is some vulgar language in the video. Tune to @SPECNewsBuffalo for the latest. Video Courtesy: Photojournalist Anthony Nelson pic.twitter.com/nP4AXgQGeR

Erie County Executive Mark Poloncarz said Thursday night that Gugino has a serious head injury but was in stable condition at ECMC. On Friday morning, Poloncarz released an update on his condition.

New update on the 75 year old man injured during last night's BPD incident: he is still in serious but stable condition at the Erie County Medical Center and, as was relayed to me by an ECMC official, he is "alert and oriented." That is better news. Let's hope he fully recovers.

“Tonight, after a physical altercation between two separate groups of protesters participating in an illegal demonstration beyond the curfew, two Buffalo Police officers knocked down a 75-year-old man. The victim is in stable but serious condition at ECMC. I was deeply disturbed by the video, as was Buffalo Police Commissioner Byron Lockwood. He directed an immediate investigation into the matter, and the two officers have been suspended without pay. After days of peaceful protests and several meetings between myself, Police leadership and members of the community, tonight’s event is disheartening. I hope to continue to build on the progress we have achieved as we work together to address racial injustice and inequity in the City of Buffalo. My thoughts are with the victim tonight.”

The original statement from Buffalo Police said a man was injured when he tripped and fell. The police spokesperson says once the BPD was made aware of additional video, Commissioner Byron Lockwood opened an immediate investigation and the two officers were suspended.

Petitions calling for the firing of the officers involved in the incident are circulating online. One has exceeded its original 200,000 goal and is on its way to 300,000 signatures.

Gov. Andrew Cuomo spoke about the incident on Twitter, calling it "wholly unjustified and utterly disgraceful."

This incident is wholly unjustified and utterly disgraceful.

I've spoken with Buffalo @MayorByronBrown and we agree that the officers involved should be immediately suspended pending a formal investigation.

Police Officers must enforce — NOT ABUSE — the law. https://t.co/EYIbTlXnPt

U.S. Senator Charles Schumer also released a statement, saying, "The video was deeply disturbing and the actions taken were wrong. We need a prompt investigation and full accountability."

The state Attorney General's Office says it is aware of the incident.